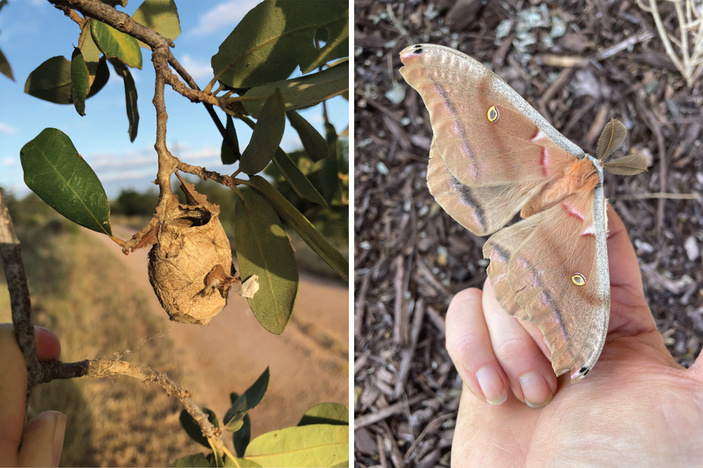 The polyphemus caterpillar builds a large cocoon (left) that looks a lot like a toy clay pot hanging from a tree. When it bursts forth as a moth, it is one of the bigger ones around. These moths only live a few days. Once they have mated and laid eggs for the next generation, they die. Staff photos by Jennifer Greenwell

"In the light of the moon a little egg lay on a leaf. One Sunday morning the warm sun came up and — pop! — out of the egg came a tiny and very hungry caterpillar." — from “The Very Hungry Caterpillar” by Eric Carle

Today’s caterpillars soon to be tomorrow's moths and butterflies

Caterpillar season has dropped in this year with more than the usual amount of small green, brown, and black creatures seemingly falling from the sky. They are actually dropping from trees on thin silk threads on their way to pupate. We’ll explain.

Caterpillars come in various shapes, sizes, and colors. Some have hair (a lot of hair) and some do not. Some have a rather nasty sting, but most do not. Many become moths, while others become butterflies. So which is which?

Caterpillars are the eating stage in the journey to adulthood, and goodness gracious can they eat! They eat leaves — lots and lots of leaves — from trees, shrubs, and garden plants. This stage only lasts three to six weeks and is typically not harmful to most trees and plants as they can easily grow more leaves.

Sometimes, an overabundance of caterpillars can wipe out trees or plants to the point they do not have enough energy to recover from the defoliation. These events are cyclical, based on the increase in the caterpillar population over many cycles, and do not happen year after year.

Caterpillars spend a great deal of time in groups. They are hatched in groups, they feed in groups, some even make tents or pads and rest in groups. Being part of a group serves as a defense against predators, including birds, lizards, frogs, and even other insects. By the time caterpillars reach the end of the larval stage, they are on their own as they morph into the pupal stage.

Take a look at some of the caterpillars that are commonly seen each spring in the Highland Lakes and what they become in the end, before it’s their turn to lay eggs and die.

The larva hatch in early spring. The eastern and western varieties make tents, while the forest caterpillars make silken resting mats. The Sonoran caterpillar spins a small web when molting. They are about 1.5 inches with a few long hairs along the body, mostly on the sides. The eastern caterpillar has a solid white line down the center of its back; the western has white dashes down the middle of its back; the forest has a white keyhole or bootprint markings down the center of its back; and the Sonoran caterpillar has yellow dashes and blue spots on segments with the third from last segment mostly black on top. Usually seen in spring-summer.

Tussock: 1.7 inches. Fuzzy white with a black head, black spots down middle of back, and two tufts of longer black hairs at the front and rear. The hairs might cause an allergic reaction. Usually seen in summer. 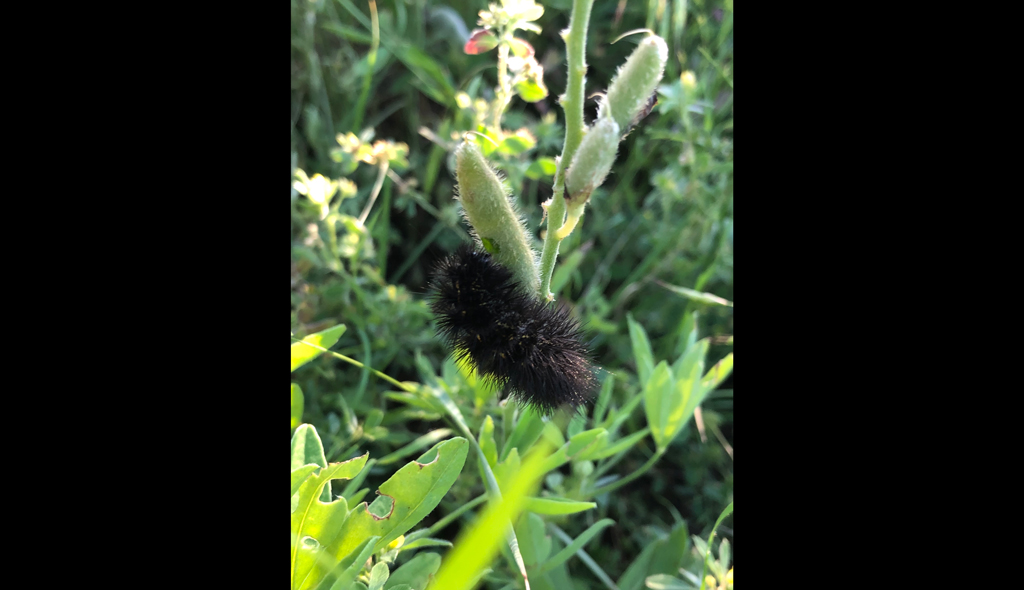 Great leopard: 2 inches. Fuzzy black with a red-orange body that might be difficult to see due to the mass of black hair.

Io: Mature larva are bright green with red/white stripes along their sides and clusters of bristle hairs on segments. Hairs are very irritating to humans. Spring/summer.

Buck: Can reach 2.5 inches. Brown/black body with tiny white dots and multi-branched dark spines lining each segment of the body. Found on grasses.

Saddleback: Bright green with brown ends and a brown “saddle” in the middle. White areas line the edges of brown. Each end of the body has two spiny tubercles. Slug-like body. 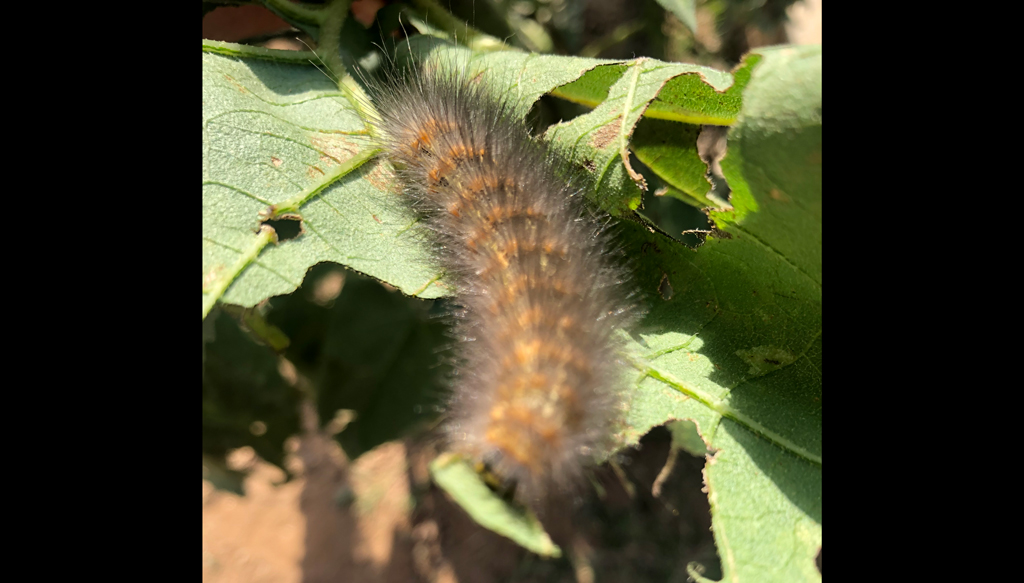 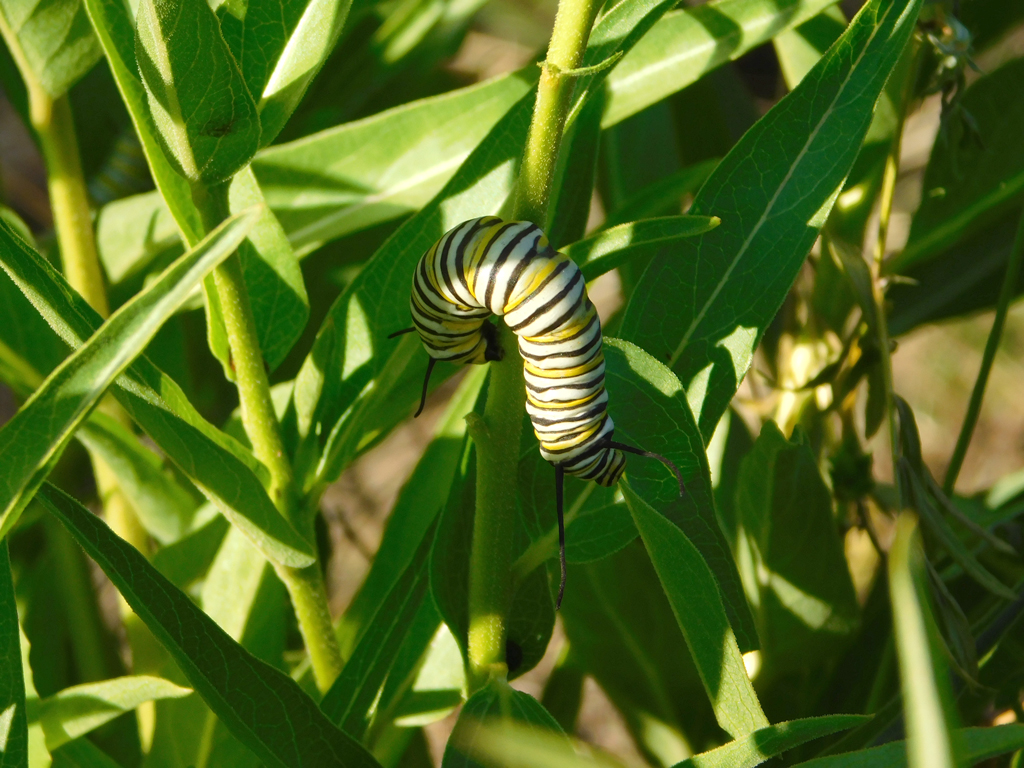 Queen: 2.4 inches. Same coloration as the monarch but does not have a uniform ringed/banded appearance. Has three pairs of black filaments along the body with red at the base.

Pipe vine swallowtail: 2 inches. Black velvety looking body with pairs of orange bumps on each segment along the back and three pairs of black filaments on the head and tail. Longest filament pair is at the head.

Tiger swallowtail: 2.5 inches. Green, slug-like body with light blue dots on the segments. Has a pair of false eyespots that are yellow with a black center and a small blue dot in middle.

Red banded hairstreak: Half inch. Brown with a stripe down the mid-back and covered in short hair. Has black dots along the edges.

The caterpillars that sting are not aggressive, will not pursue you, and do not become stinging moths. The sting comes from the urticating hairs that connect to a poison gland. When touched or brushed, venom is injected. If you touch one of these caterpillars — or it drops on you inadvertently — the pain and burning sensation begin immediately. Some stings cause a rash and red, raised spots.

The most common stinging caterpillars in Central Texas are:

Caterpillars are the larval stage in the complete metamorphosis of moths and butterflies. Complete metamorphosis begins when fertilized eggs hatch and produce a larva or caterpillar. This primary stage of metamorphosis can be thought of as the eating stage. The caterpillar eats (and eats, and eats!) and grows through several stages called instars — the insect version of baby, toddler, school age, and teen stages of life.

The next stage of the metamorphic cycle is pupa, which is spent in a self-spun silk cocoon. Butterflies spend the pupal stage in a chrysalis with a hard exoskeleton covering that protects it from harm. During the pupa stage, the insect is inactive — on the outside. All that eating during the larval stage fuels what goes on inside during the pupal stage so the insect can reach adulthood. Metamorphosis is complete when an adult moth or butterfly emerges from its protective covering.