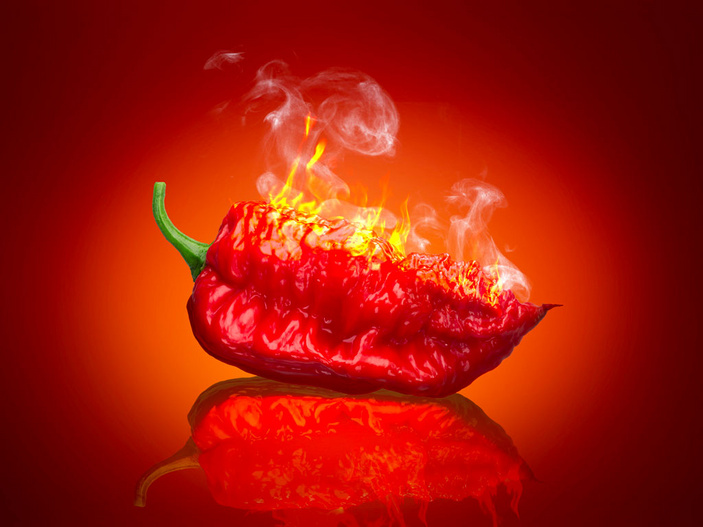 Bite into a fresh chile and life suddenly gets intensely more interesting — and sometimes painful. Packed with capsaicin (pronounced kap-SAY-sn), chiles can cause tongue-tingling, eye-watering, mouth-on-fire sensations along with sweat-beaded brows and flushed cheeks. 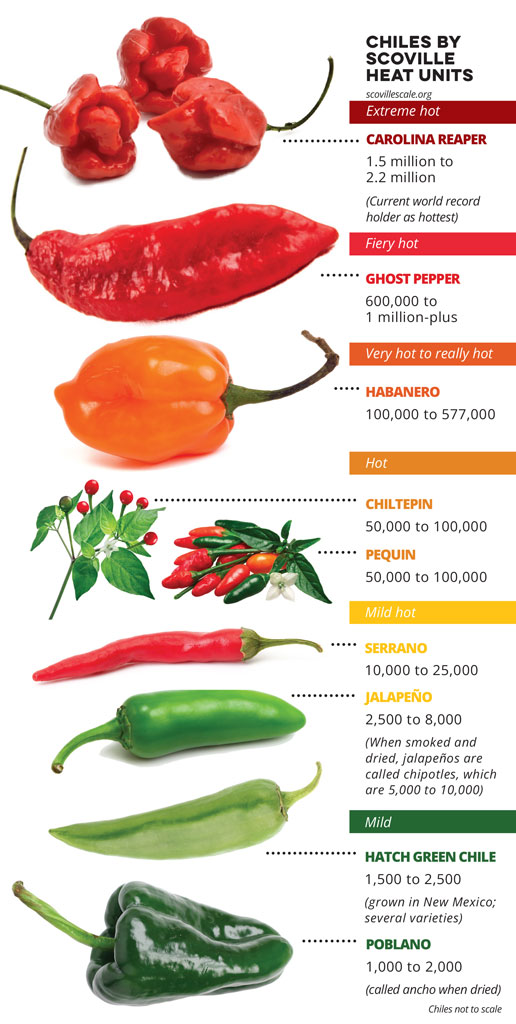 Chiles from mild to extreme on the Scoville scale.

Capsaicin is a natural compound that activates a heat-detecting protein in the body. All chiles have it — to some degree. Much like a smoke detector, the protein signals the brain that something is burning, causing a flood of hormones to be released. This flood, oddly enough, gives the chile eater a rush that often stirs a desire to rinse and repeat. Depending on the chile consumed, the partaker might feel its effects for many more hours. While the whole hurts-so-good experience is not for everyone, it is entirely possible to enjoy chiles without the drama.

Yes. Geographically speaking, all are correct. Mexico and those of us in the American Southwest use chile. The rest of America more often spells it chili, while Europeans add another "L." The basic American premise is that chili is used when referring to the meat dish, while chile refers to the actual fruit.

While many use the terms pepper and chile interchangeably, they are not the same. Chiles are in the genus capsicum, a perennial shrub, and get their heat from the chemical capsaicin.

Peppers are in the genus piper, a woody vine. A pepper’s warmth comes from the chemical piperine. Peppers add flavor; chiles add flavor and heat.

Chiles are ranked on the Scoville scale by pungency, the effect they have on taste or smell. In 1912, when the scale was invented, people were used as test subjects to measure pungency. This process involved grinding up chiles and diluting the solution with sugar water until no heat could be detected by the taster. Today, this measurement is done by high-performance liquid chromatography and no longer involves human tasters.

The chile currently considered the hottest in the world is the Carolina Reaper at upwards of 2.2 million Scoville heat units. At the very lowest point on the scale, meaning no heat, is the bell pepper. In between these two extremes are thousands of varieties of chiles, including many happy mediums, so pick your peppers wisely.

The most popular chile in Texas, the jalapeño, is also the official state pepper. However, the chiltepin is the only chile native to Texas and is the official native pepper of Texas. The chile pequin, a cultivated chile variety, is often mistaken for its wild cousin the chiltepin.

Chiltepins really pack a punch, registering at 50,000 to 100,000 Scoville heat units — that’s about 20 times hotter than the jalapeño, which falls at 2,500 to 8,000 SHUs. Chiltepins are small and globe-shaped and turn a fiery red when ripe. Birds love them, which is why they are nicknamed "bird peppers." Incidentally, they share this nickname with other chile varieties.

It’s good to go after a day. Does not need refrigeration.