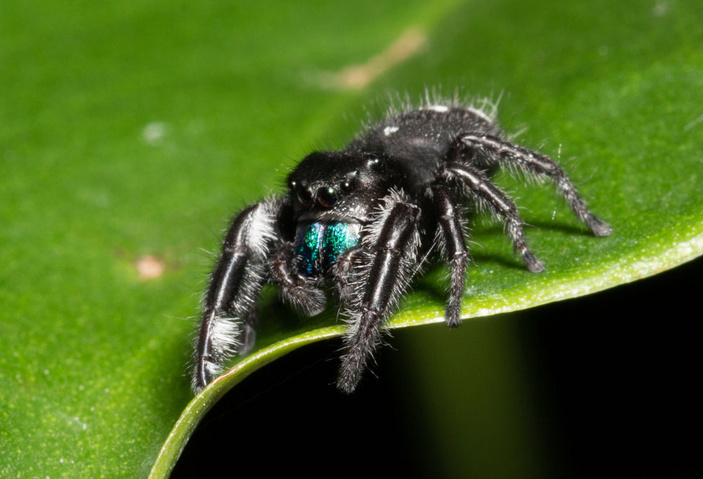 The jumping spider is just one of many common spiders found in the Highland Lakes.

While enjoying time outside in the Highland Lakes, pause for a moment and look around closely. You are likely to find a spider nearby.

Spiders come in a wide variety of colors, patterns, and sizes. Some have thick hair; others have none. Some have excellent vision; others can barely see. Some jump right at you; while others quickly flee.

Spiders do have a lot in common, though. To qualify as an official spider, rather than an insect, it must have eight legs, six or eight eyes, two arm-like pedipalps in front, two fangs, venom-producing glands, and the ability to spin silk. Spiders, which can ingest only liquified meals, belong to the order Araneae, which is the largest order of arachnids and includes at least 48,200 species.

To ease your mind before your next spider encounter — and it most likely will be soon — here are some fun facts about eight of the most common spiders found in the Highland Lakes.

SPIDERS OF THE HIGHLAND LAKES 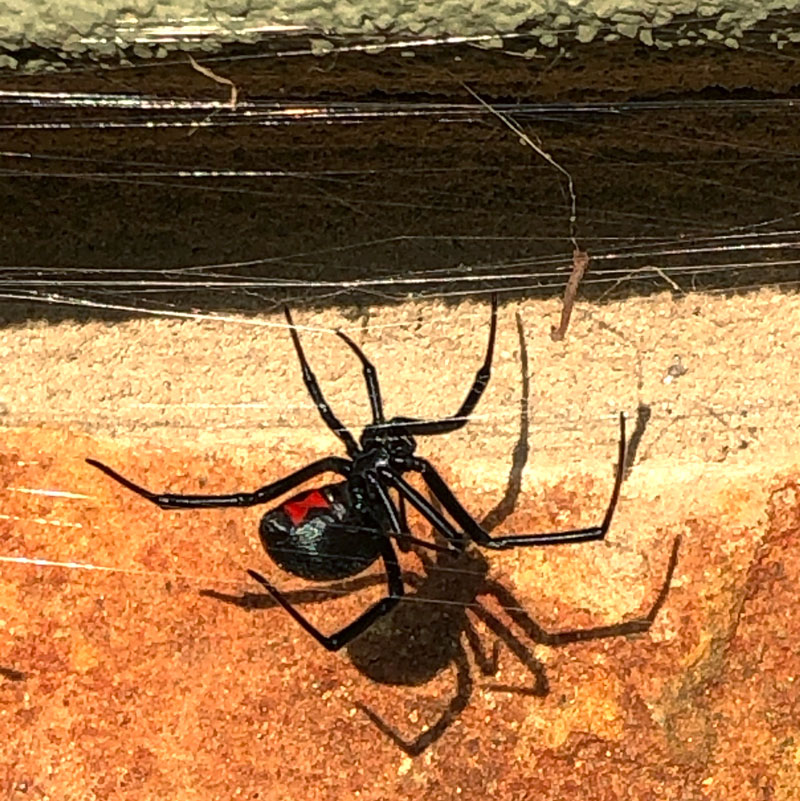 Female black widow spiders have a bright red mark on their abdomens. They are dangerous to humans. Staff photo by Jennifer Greenwell

Widow spiders (genus Latrodectus), both black and brown, vary in appearance from male to female. An adult female is typically about 1¼ inches long, black and shiny with a red marking on its large, round abdomen. An adult male is generally smaller and brown.

Widows prefer to make their homes in dark, undisturbed areas but can be found anywhere. This group of spiders spin thick, sticky, unorganized webs to capture prey, which often includes fire ants, June bugs, and scorpions.

Widow venom packs a punch, affecting the nervous system. They are not aggressive but will bite when threatened or disturbed — even accidentally. Bites warrant medical treatment and can be harmful to humans. The spider is one of two in this list considered dangerous. 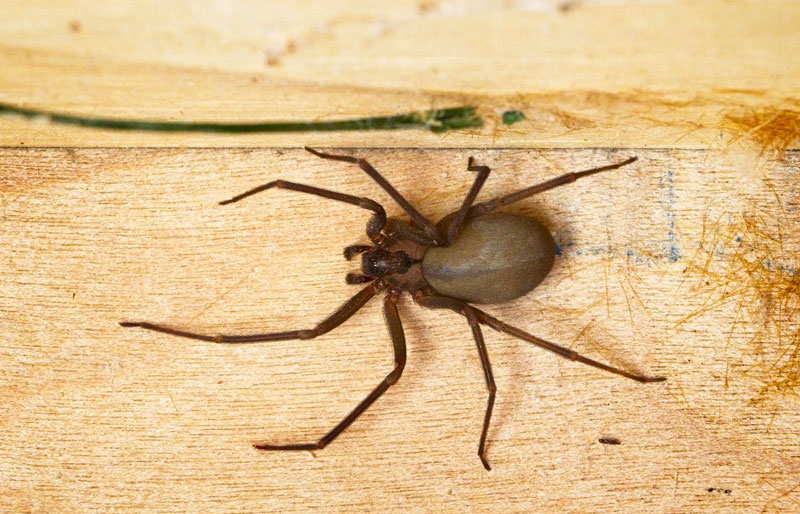 Recluse spiders hunt for their meals rather than capture them in webs. Seek medical attention if bitten by one.

Recluse spiders (genus Loxosceles) are the second in the threat-to-humans category. They generally measure about three-eighths of an inch and are tan-light brown with a dark brown fiddle shape on the head (cephalothorax) and a fiddle neck that points toward the abdomen. They are nocturnal but can be seen in the daytime hunting prey, which includes silverfish, cockroaches, and crickets.

While they do make webs, the spun silk is only used as a place to hang out rather than capture prey. Recluse spiders go on the hunt for their meals. Their six eyes have excellent vision.

Recluse spiders are often found in stacked wood, under rocks or tree bark, and in garages, attics, and other places within a home. As the name implies, they are shy and not typically aggressive but will bite if disturbed. Recluse venom has necrotizing properties and causes tissue and muscle to break down. A recluse bite warrants medical treatment. 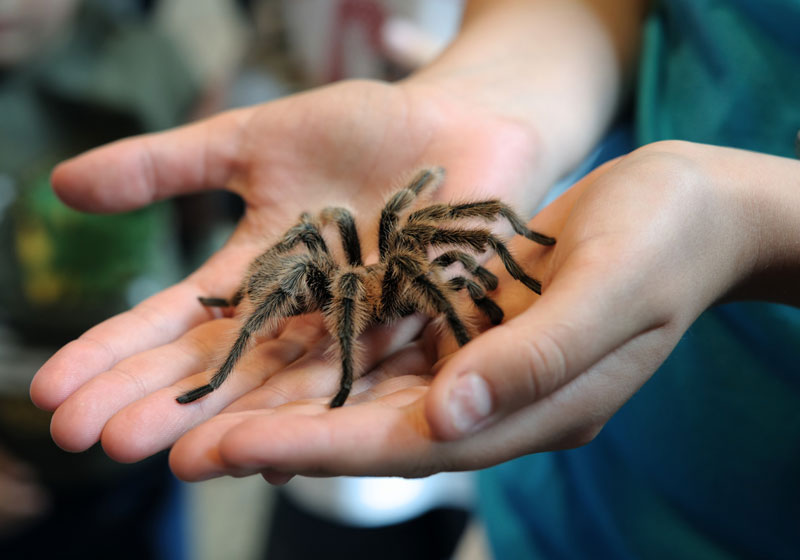 Tarantulas are popular pets. When not behind glass, they live in burrows and only come out to hunt prey or mate.

Tarantulas (Theraphosidae family) are the largest and heaviest spiders in Texas and the United States. They have hairy, dark brown legs and a hairy, brown-black abdomen. Tarantulas can have up to a 6-inch leg span and weigh 1-3 ounces. These non-aggressive, shy spiders are very sensitive to vibrations. They live in burrows, under logs or rocks, and even beneath loose tree bark.

Tarantulas are nocturnal and do not have great vision. They don’t spin webs but will lay down a silk thread near their burrows that serves as a trip wire, notifying them of approaching prey. They eat insects and rarely leave the burrow, unless foraging or during mating season. 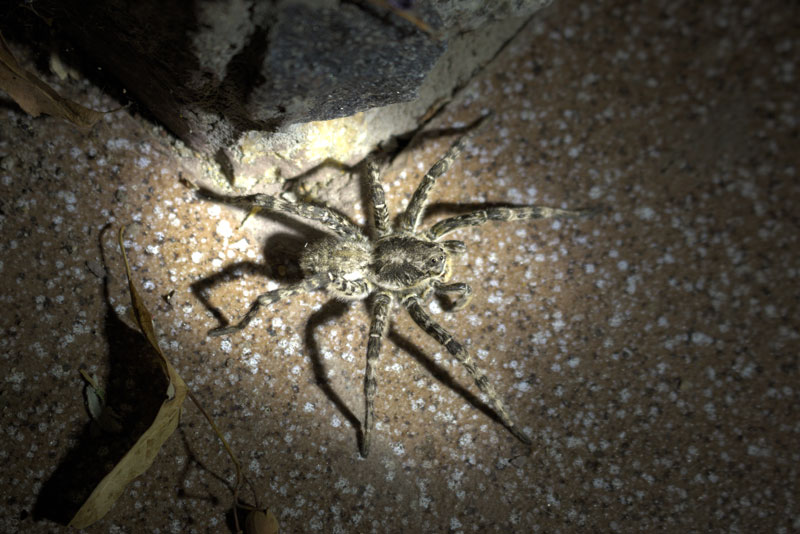 With their excellent vision, wolf spiders often hunt at night.

Wolf spiders (Lycosidae family) are hairy, dull-colored creatures with brown, gray, black, yellow, or off-white markings. They often have two dark thick stripes running from front to back and can be fairly large at about 3 inches. They are most common in fields and yards.

Wolf spiders are nocturnal and have good night vision. They are often seen on roads at night when light reflects from their two large eyes. Wolf spiders are generally not aggressive and usually hide from people, but they can bite. Their venom is not harmful to humans. A female can sometimes be seen carrying a silken egg case or spiderlings on her back until they are ready to hunt. 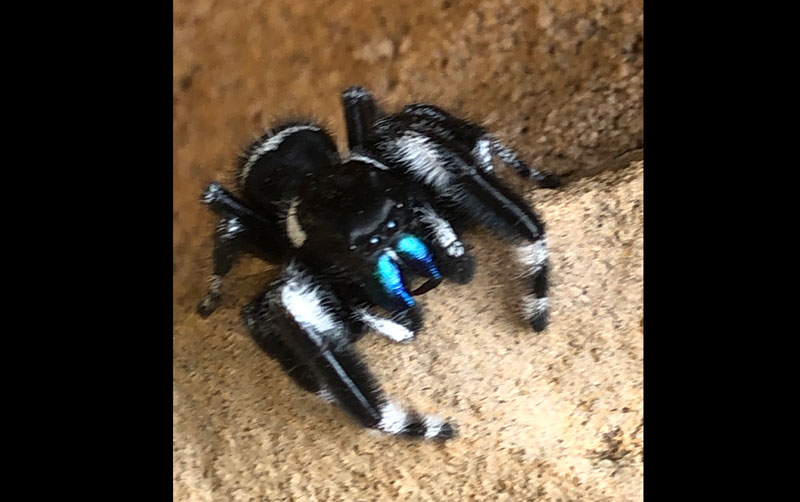 Jumping spiders (Salticidae family) have a stocky, hairy appearance and are brightly colored. They may have black and white bands on the body or legs but can also be brown, gray, black, red, yellow, metallic/iridescent green, blue, or copper. The males are more ornate to gain the attraction of females.

Jumping spiders have excellent vision. These spiders do their hunting during the day. They are territorial and certainly live up to their name, so watch out! Jumping spiders are unlikely to bite unless handled or cornered. 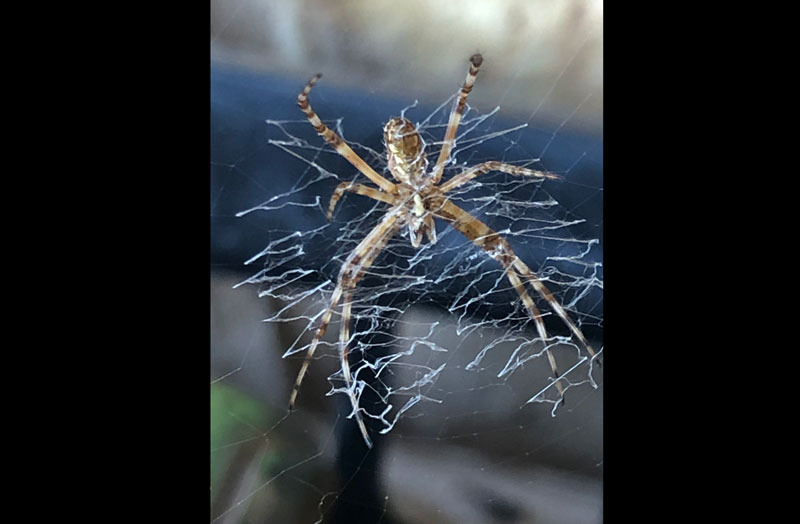 Orb weavers spin unique webs that they use to catch prey. Staff photo by Jennifer Greenwell

Orb-weaver spiders (Araneidae family) come in many shapes, colors, and sizes. They spin circular yet vertical webs that they use to catch prey. Orb-weavers spin different types of silk when building a web. They have poor vision and rely on vibrations to alert them to captured prey. They are most active in the daytime and prefer sunny, wind-free spots to build their silken traps. Orb-weavers are harmless to people but can bite.

Crab spiders (Thomisidae family) vary in color, often yellow or white, but can change color depending on the background. These tiny spiders, which range from 4-10 millimeters, do not spin webs but lay in wait on leaves, bark, or flowers to catch their prey. They have excellent vision.

Crab spiders have a crab-like appearance with two pairs of larger front legs and a sideways movement due to the location of those legs. They are not harmful to humans. 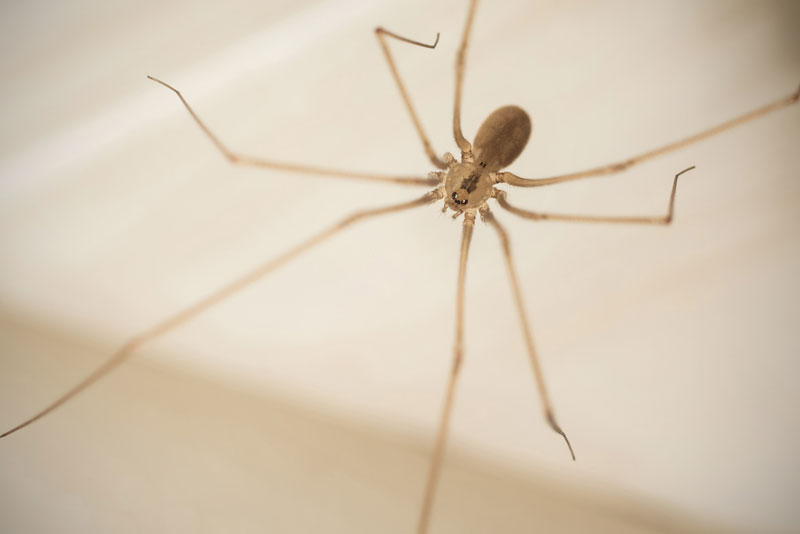 Cellar spiders are commonly referred to as 'daddy longlegs' or 'granddaddy longlegs.' They are not aggressive.

Cellar spiders (Pholcidae family) are commonly referred to as "daddy longlegs" or "granddaddy longlegs." They are typically gray or brown with delicate and extremely long legs in comparison to their tiny, peanut-shaped bodies. These spiders are often found in attics and cellars, under rocks, and in other undisturbed places. They are not aggressive.

If cellar spiders perceive a threat, they vibrate rapidly, producing a shaky, wobbly appearance. If the threat persists, they will retreat. Cellar spiders spin irregular non-sticky webs used to alert the spider to incoming prey. Being a spider, they have venom, but pose no threat to humans.

Relatives but NOT spiders… 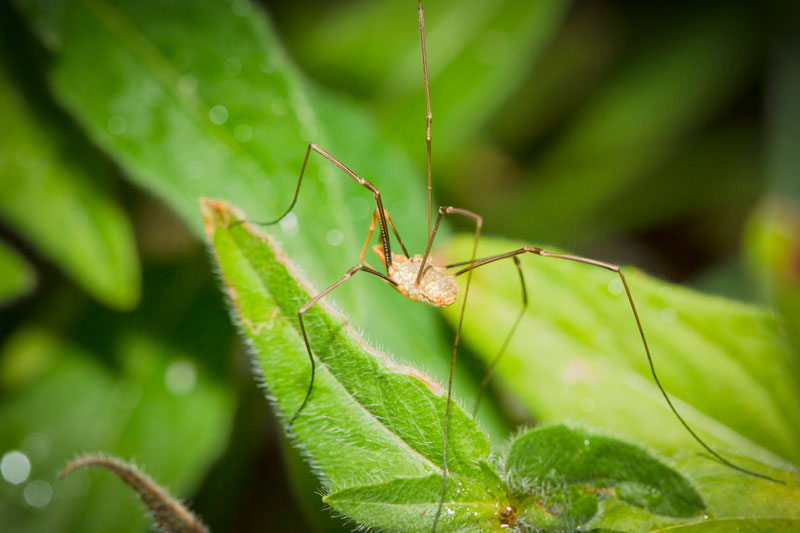 Harvestmen are not technically spiders, but they are related to 'daddy longlegs.' However, they are more closely related to scorpions.

Harvestmen are arachnids that are also known as "daddy longlegs," but they are not spiders. They are from the order of Opiliones, more closely related to scorpions, which also have eight legs. The eight legs on harvestmen are long and thin. They only have two eyes and cannot produce silk or make webs. They do not have venom glands.

These arachnids have an oval-shaped body that appears as one segment. As the name implies, they are harvesters — scavengers — and feed on mostly alive, but also dead, insects, fungi, fecal matter, or plant material. Interestingly, after eating, they clean their legs with their mouth part. Sometimes, they are found in large clusters. Harvestmen bob up and down and even release a foul scent when threatened. They pose no threat to humans.

Widow venom affects the nervous system. The initial bite has been likened to a pinprick. Within 1-3 hours of a bite, however, a person will experience moderate to intense pain through their whole body that can last 2-3 days. Symptoms include tremors, nausea, loss of muscle tone, cramps, sweating, and elevated blood pressure. Medical attention is necessary for a widow spider bite.

Recluse venom contains necrotising enzymes and causes tissue and muscle to break down. Bites are said to be initially painless but become progressively more painful within 2-8 hours. The venom causes skin and muscle tissue to die. Reactions vary from person to person. Medical attention is necessary for a recluse spider bite.

Tips for hiking in the Texas summer heat

No boat, no problem: Fish from the banks
More Outdoors
Advertisement