Browse Highland Lakes History Guide for more articles like this.

Down in Dead Man’s Hole 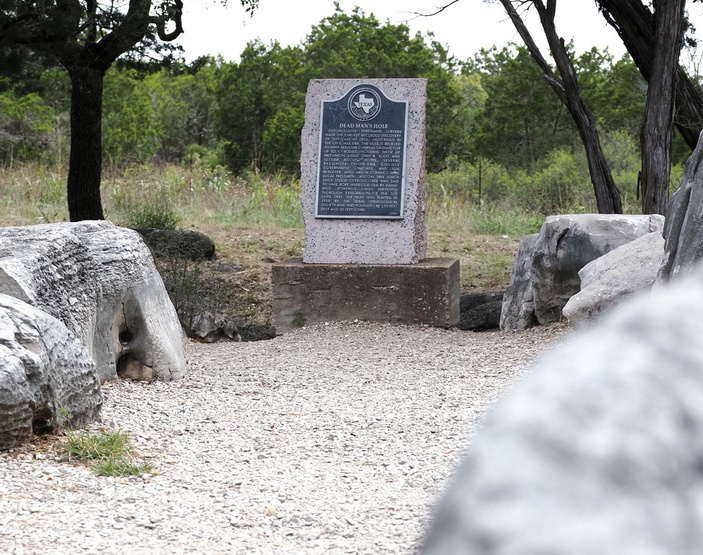 Dead Man’s Hole earned its nefarious name more than 100 years ago, when pro-Confederacy men hunted down Union loyalists and reportedly disposed of their bodies in the hole located in southwest Burnet County. Staff photo by Daniel Clifton

Down in Dead Man’s Hole

The bones of the first Burnet County judge, John R. Scott, once rested on the bottom of Dead Man’s Hole southwest of Marble Falls. He was just one of at least 17 men whose bodies were dumped in the now-covered crevice.

The haunting stories of bodies hanged, killed, and/or disposed of near and in the hole just off of County Road 401 earned it a Texas state historical marker and a place in local legend. The marker was put up after the late state Senator Walter Richter researched and wrote a narrative of the hole’s history for the Texas Historical Commission. His report contained information he obtained from interviews with his grandfather, who was one of the people who descended into the hole to retrieve bones and items of clothing found there. Richter has a close connection to one of the victims as well.

“My direct ancestor was one of the ones murdered and put into Dead’s Man Hole,” said Walter’s daughter, Robyn Richter, who lives on the Richter ranch in Marble Falls. “Adolph Hoppe was my direct great-great-grandfather, an immigrant from Germany.”

Quite a few Germans settled in Burnet County before the Civil War, and many of them were pro-Union.

“The Germans left a country that was deeply divided,” Richter said. “They wanted the unity of the United States. Some joined the Union, but a lot kept their mouths shut and tried to stay out of trouble.”

Trouble found them, however, as Confederate supporters known as bushwhackers, or fire-eaters, sought out and killed Union stalwarts in the county — and there were a lot of them. Burnet County residents voted 248-149 against secession, bucking the Texas trend toward the Confederacy.

Judge Scott was one of those accused of siding with the Union, even though his four sons all served in the Confederate army. A founding resident of Oatmeal, Scott tried to flee to Mexico when he heard the fire-eaters were coming for him. He was joined by another Unionist, James McMasters. They were captured in Smithwick. Scott was shot and robbed of $2,000 he had hidden around his waist. McMasters was hanged. Both of their bodies were dumped in Dead Man’s Hole. As for Richter’s ancestor Adolph Hoppe, he and fellow rancher Henry Flaugher (spelled "Flower" in some records) were in a cedar brake cutting posts when the fire-eaters and a Texas Ranger found them. The unnamed ranger later told his version of events to Walter’s grandfather, Herman Richter, who passed it along to Walter.

The bushwhackers asked the ranger to come with them to arrest Hoppe on charges of holding illegal secret meetings against the Confederacy. Hoppe put up a vehement — and, at first, successful — defense. Flaugher was arrested. The bushwhackers told the ranger they would take Flaugher to Fort Sam Houston in San Antonio for trial.

Hoppe headed home, and the ranger left for Burnet. The bushwhackers are believed to have hanged Flaugher and shot Hoppe because he saw them. Parts of their clothing and Hoppe’s harness were found on a ledge just below the lip of the entrance.

The Civil War deaths were just the beginning of the hole’s macabre history.

One of the last people associated with a tragedy there was Benjamin McKeever.

Sometime around 1871, McKeever came across a yipping dog while riding his horse through the Double Horn Creek area, where several Black families had settled. The dog startled McKeever’s horse, so he fired his revolver at it several times, missing it each time. The dog’s owner, believed to be a Black man named Ben Shelby, confronted McKeever, who turned his pistol from dog to man.

Some reports say McKeever fired at Shelby but missed or the gun misfired. Either way, Shelby lived but harbored a grudge and a need for revenge. He later learned that McKeever would be traveling through the area again on his way home from Captain Jesse Burnam’s house. Shelby gathered three other men — Arthur Shelby, Ball Woods, and William Smith — and the four ambushed McKeever, shooting him with a shotgun and cutting his throat.

They disposed of McKeever’s body in Dead Man’s Hole, though one report states the body was first dropped in a nearby well and later retrieved for a more secure disposal. McKeever’s friends found one of his shoes on the same ledge as Hoppe’s harness.

McKeever’s body was recovered by a local police officer named in one account as Nimrod Miller and in another as Dock Miller. The officer was declared a hero and later elected Burnet County sheriff. He took off one day on a manhunt to Oklahoma and was never seen again.

In a January 1873 trial, the four men were each convicted of McKeever’s murder. According to several reports, including Burnet County execution records, they were hanged on January 15, 1873. Another report states that three of the men were sentenced to prison and a fourth acquitted.

“It’s a tomb,” said the museum’s board chair Darlene Oostermeyer. “People were entombed there.”

Richter and Oostermeyer both agree that, most likely, no bones remain at the bottom. Several groups have investigated its depths in the past, including in 1951, when two staffers at the University of Texas at Austin went down into the hole. Their findings triggered the formation of the University Speleological Society at UT a few months later. That group mapped the hole in 1968.

According to their report, the hole is 7 feet in diameter at the surface. It splits into two areas at the base, one of which goes back about 15 feet. The other slopes down at a 45-degree angle for about 30 feet. The total depth is around 160 feet.

Amateur spelunkers from Marble Falls are known to have rappelled into the opening as late as the 1970s, only to be chased out by bats.

In 1999, Ona Lou Roper, who died in Marble Falls one year later, deeded Dead Man’s Hole and 6½ acres surrounding it to Burnet County. It remains a public park. Visitors can see the historical marker and the opening of the hole, but a metal covering prevents anyone from entering — or dropping anything else into its depths.

For more stories from the past, visit the Highland Lakes History Guide.

WRITTEN ON THE MARKER: Entomologist Ferdinand Lueders made the earliest recorded discovery of this cave in 1821. Notorious in the Civil War era, the hole is believed to have been the dumping ground for up to 17 bodies, including those of pro-Union Judge John R. Scott and settler Adolph Hoppe, several Reconstruction-era county government officials, and Ben McKeever, who had a conflict with local freedmen. An oak tree, which once stood over the cave, was said to have rope marks caused by hangings. Powerful gases prevented thorough exploration of the site until 1951. The hole was platted in 1968 by the Texas Speleological Society and was found to be 155 feet deep and 50 feet long. (1998)

Find more articles like this in Highland Lakes History Guide

My family owned this property and to my knowledge, i am the only person locally that has been to the bottom of Dead Mans Hole. Robbers disposed of bodies into this cave because no one would go down into it, because if was considered a bad air cave. I repelled down with a group of college spelunkers in the1960's. This cave is essentially straight down a narrow opening into a larger cavern at the bottom. The college spelunkers explain what in the 1800's they used torches for light. The torches used up all the oxygen and that is why the air was bad due to no or little oxygen. People in the 1800's would get dizzy or pass out due to the lack of oxygen. So when people disappeared no one would go into this cave due to their fear of the bad air.