Ode to the Odonata: Dragonflies and damselflies 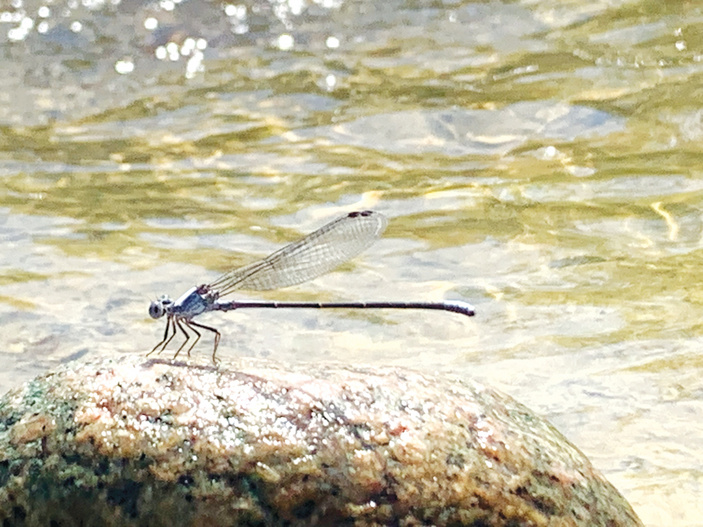 A powdered dancer damselfly pauses with wings folded on a rock in the Llano River. Dancers are found in areas with running water, such as rivers, or along shores of large lakes. Photo by Matt Greenwell

Ode to the Odonata: Dragonflies and damselflies

Late summer into early fall, dragons and damsels take wing and trek south in search of warmer weather. While this might sound like the beginning of an enchanting fairy tale, it’s actually the migration of the North American Odonata, dragonflies and damselflies.

As butterflies and birds migrate ahead of cooler temperatures, so do many Odonata. But fear not, fine reader, you do not have to mark the travel schedule for these insects on your calendar. The Highland Lakes is fortunate to have a variety of dragonflies and damselflies that call this area home year-round.And by the way, dragonflies and damselflies are two different suborders of Odanata, or Odes, with males and females of each kind.

Much like hummingbirds and Apache helicopters, dragonflies have an incredible flying ability. They can adjust the stroke pattern of their four wings independently as each is controlled by separate muscles. For this reason, they are strong fliers and master maneuverers who put on an entertaining air show. Watching these flying works of art is a popular pastime around the world and in the Highland Lakes.

Damselflies are smaller than bulkier dragonflies with their slim, almost toothpick-like bodies or abdomens. They have two pairs of equal-size wings, while the dragonfly has slightly smaller and more tapered forewings. At rest, damselflies usually fold their wings closed and up over their back. Dragonflies cannot fold their wings together. Both have fantastic vision, but dragonflies have an edge. Dragonfly eyes are so big they make up most of the head, often meeting at the top. Damselfly eyes are set on each side of the head.

What distinguishes this group from other insects is a strong and highly efficient set of choppers — not pearly whites like mammals but sharply pointed serrations on a set of large, strong mandibles. With a reported 96 percent kill rate, adult dragonflies are lethal weapons in the insect world. The bulk of their prey are pests, and, for that reason, they are considered beneficial insects. Odes typically snag (and eat) prey, all while flying.

As is often the case in the natural world, dragonflies and damselflies are also prey, both as larvae and adults. Fish and birds are partial to the larvae, while adults are frequently consumed by birds, bats, and a variety of other scaly or furry critters.

It might come as a surprise that dragonflies and damselflies spend the majority of their lives underwater. Odes have incomplete metamorphosis — they lack a pupal stage and go from “child” to adult with no teen time in between. Eggs are laid in the water or on aquatic plants. Once hatched, the larvae (naiads), which look nothing like the adults, remain in this stage for one to four years. During this time, the naiads molt, shedding the exoskeleton six to 15 times, depending on a variety of factors. When nature deems it time, a larva leaves the water, typically in the spring, sheds its skin one last time and becomes a full-grown adult.

Migratory Odes make the trek south from late summer to early fall. As mentioned earlier, not all migrate, but the North American Odonata that do migrate head for Mexico or the West Indies. Central Texas is right in the flight path.

The study of these creatures is still an emerging field, so a lot is left to discover about their behavior. You can be part of that discovery by becoming a citizen-scientist. Take your binoculars to any local body of water, get comfy, and scan the water’s edge. When patience pays off, report or record what you find using the iNaturalist app and/or Odolympics 2021 at odonatacentral.org/odolympics. You are now a citizen Odanatologist and can live happily ever after.

The United States has about 450 known species of Odonata; Texas has at least 250. Here are some of the Odonata families native to the Lone Star State. 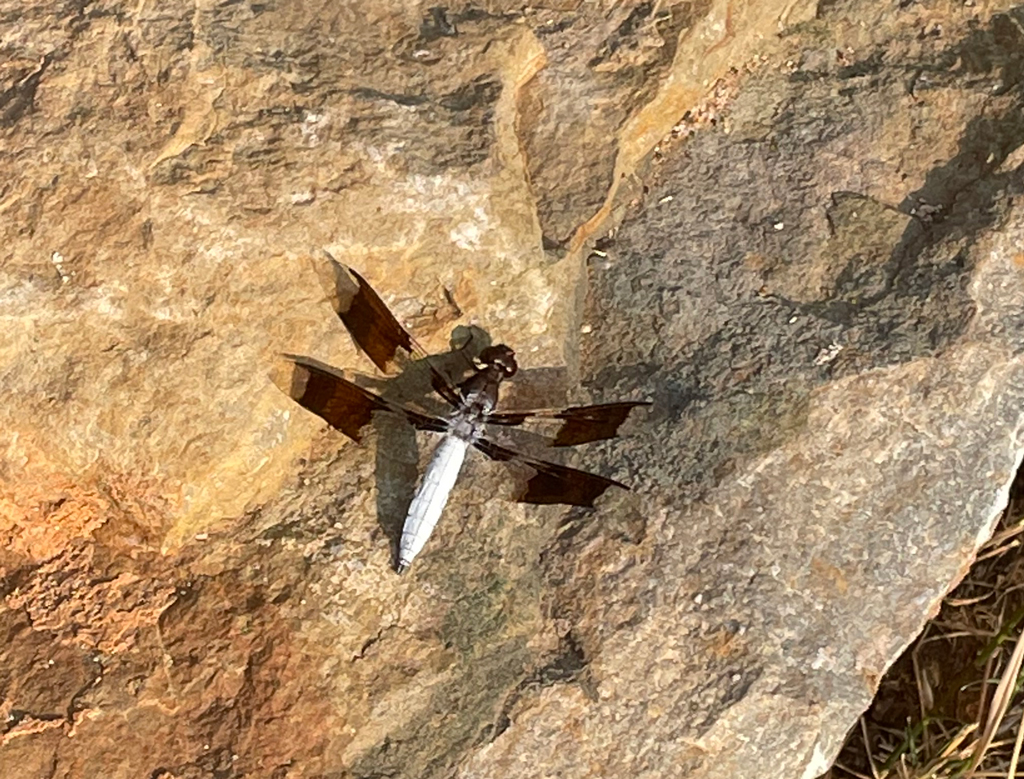 A common whitetail skimmer takes a timeout on a rock. Skimmers are known to land on one perch many times for a short rest while on patrol. Staff photo by Jennifer Greenwell

Skimmers have eye-catching wing patterns and colorful bodies. They perch often and return to the same perch for periods of time, making them easier to observe.

Darners are the biggest dragonflies. Colorfully patterned with green, blue, or yellow, they are usually what comes to mind when one thinks of a dragonfly. Darners fly for long periods of time without perching.

Spiketails have patterns of black/brown and yellow on their abdomens. The females have a long ovipositor, which resembles a spike.

Clubtails have club-shaped abdomen/tails with clear wings. Interestingly, some other families also have club-like tails, making identification a bit tough. A true clubtail stays closer to the ground when flying and spends a lot of time resting.

Emeralds are so named for their lovely green eyes. The wings are clear, but some have an amber tint.

Cruisers have a habit of cruising up and down patrolling rivers and roads. The black/brown abdomens are usually marked by a single yellowish spot with the last being the largest. They have somewhat of a club-like abdomen.

Broad-wingeds often have a metallic green, blue, or bronze abdomen and are known to flutter like butterflies.

Pond damsels are the most numerous and common. They have narrow wings and colorful eyes with spots just behind the eyes.

Spreadwings are known for more subdued body colors and typically perch with wings slightly spread. They are usually larger than other damselflies.

Threadtails are fairly small and have the most slender bodies of all Odonata, hence the name. They often have dark abdomens and colorful heads of red, orange, yellow, or blue.