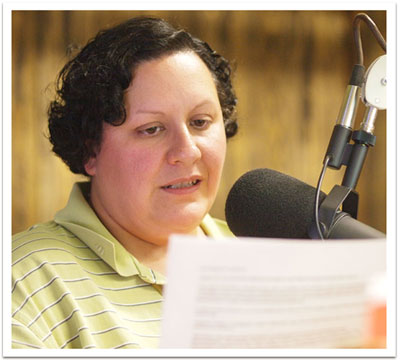 Fierro has been a journalist with Victory Publishing for almost a decade and is privileged to be part of several award-winning staffs.

“Just like the teams I cover,” she says with a smile, “there’s no greater feeling on a professional level than winning the top team awards and sharing it with those who are there every step of the way.”

“After spending years as a print reporter, adding radio just fit,” she says.

Perhaps one of Fierro’s strengths might be her knowledge of the history of Highland Lakes sports, which she began gathering decades ago thanks to being a graduate of Marble Falls High School.

She graduated from Abilene Christine University in 1997 with a degree in broadcast journalism. After her stint at ACU, she worked as a sports reporter in New Mexico and was named managing editor at papers in Arizona and Boerne. She returned to the Highland Lakes in 2005 and saw that Victory Publishing was looking for a reporter.

“The Picayune sets the bar for community newspapers,” she said. “So it was a no-brainer to apply.”

Turns out, it was a good time to return to reporting. The Highland Lakes sports scene was exploding thanks to two starting college football players (Stephen McGee and Jordan Shipley), an NCAA middle-distance running champion (Leonel Manzano) and high school athletes who were making annual treks to state tournaments and meets year in and year out.

In many ways, Fierro has fulfilled much of her aspirations of covering the Olympics, national championships and the NBA thanks to the draw of the Highland Lakes. And she counts it a blessing to document the local high school sports teams each year. She can proudly say she remembers when many of those athletes got their start in elementary school.

“I don’t take for granted the opportunity of being a sports reporter right here in Burnet and Llano counties,” she said. “Growing up, I always knew this area boasted of some of the best athletes in the state. I’m happy these players are finally getting the credit they deserve.”

“I always wanted to do everything, and this place gives me the chance,” Fierro says.

You can contact jennifer through email at jfierro@thepicayune.com
ARTICLES BY Jennifer Fierro

The rodeo comes to Marble Falls the third weekend in July. The dirt-kicking action returns in 2021 after a year off due to the pandemic. The...

Boogie at the Bay in Horseshoe Bay in June

Boogie at the Bay in Horseshoe Bay is giving people five good reasons to groove on Wednesdays in June — for free. The summer conc...

Burnet County Rodeo back and bucking

The Highland Lakes rodeo season gets bucking in 2021 with the return of the Burnet County Rodeo on Thursday-Saturday, May 13-15, at the Burn...

Chili culinarians and grill masters converge at Johnson Park, 230 Avenue J South in Marble Falls, on Saturday-Sunday, May 1-2, for the Howdy...

No one has to go hungry when on the road in the Highland Lakes. Food trailers dot the landscape, mixed in with the wildflowers, granite outc...

Get your tickets now for the chicken-fried steak luncheon at the 17th annual Llano River Chuck Wagon Cook-off, which is returning to Badu Pa...