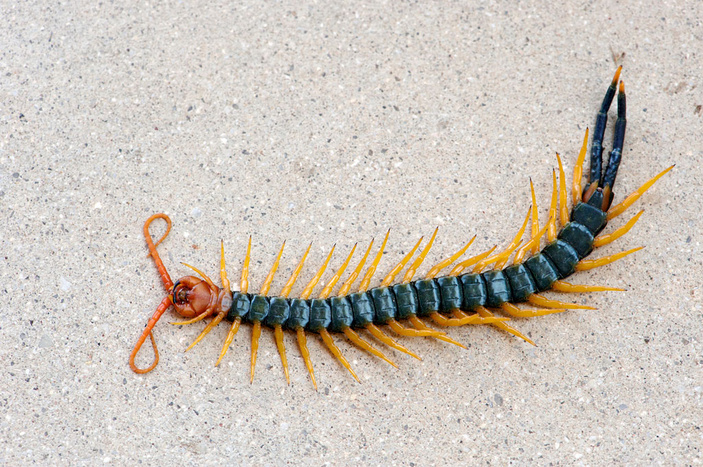 Common across Texas, the giant red-headed centipede (Scolopendra heros) reaches up to 8 inches in length — the largest centipede species in North America.

This native Texan is, to some, what nightmares are made of: a large, dark, squirmy body fitted with 40-something writhing, scratching, venomous legs fronted with a glaring red head and a mean set of vicious-looking fangs, also supplied with venom. What’s not to love?

Common across Texas, the giant red-headed centipede (Scolopendra heros) reaches up to 8 inches in length — the largest centipede species in North America. True to its nickname, it typically sports a red or rust-colored head on a dark black to black-green body with yellow legs and a mean-looking pair of yellow-tipped black legs at the end. Its aposematic coloration of black, yellow, and red serves as a visual warning to predators that this creepy crawler packs a punch.

The red head has two antennae, a pair of hardly noticeable eyes, “fangs,” and a powerful jaw. The fangs, called poison claws, gnathostomes, or forcipules, are not actually fangs at all. Used in hunting and defense, these specialized legs pinch and inject venom.

This species of centipede has 21 or 23 body segments, each with a pair of legs, which, of course, does not add up to 100. Despite its name, the “centipede” only sports 42 or 46 legs depending on the number of segments.

Known as maxillipeds, the legs on the first section of a centipede’s body can puncture. A centipede walking across human skin can cause small wounds and blisters.

The two dark, antenna-looking things on the rear end are caudal legs. Longer than walking legs, caudal legs can grasp and pinch. To predators, they look like antennae, drawing attackers mistakenly to the tail-end, while the centipede’s poison claws on its actual head deliver adefensive dose of venom.

Commonly found under rocks, debris, logs, or anything it can hide under in the daytime, S. heros is primarily active and on the hunt at night. However, it’s not unusual to spot one scurrying about in search of cover during the day. Centipedes do not hibernate and remain active even in winter months. They seek out a warm, moist habitat when the temperature drops.

The red-headed centipede has an indirect fertilization process. The male creates a small web on which it deposits a packet of sperm called a spermatophore. Sometime later, the female collects the packet, inserts it into her special lady parts, and, when she is ready, she allows the eggs to become fertilized. The expecting female makes a nest, lays about 50 or so jelly-like eggs, then curls around the clump to protect it. For about two months, she stays with the eggs to keep them safe and free of mold and bacteria. If the female is disturbed during this time, she might eat the eggs.

Upon hatching, the young are a much smaller, almost colorless version of the adults. The young are on their own once hatched. In the wild, they can live for about six years.

The centipede’s legs — any of them! — grasp prey while the poison claws pierce and inject venom to paralyze or kill. Once the prey is subdued, the strong jaws take over and the centipede dines.

Predators of the redheaded centipede include owls, coyotes, ringtails, bobcats, badgers, cars, and a few shoes. When threatened, the centipede will usually flee but might lift its caudal legs as a warning. If it perceives a threat, or is handled and has the opportunity, it will bite.

Centipedes actually don’t bite. They pierce their prey and inject venom, which can feel like a bee sting. Pain and swelling at the bite site lasts several hours. Centipedes are not aggressive to humans and will only attack when threatened. While fatal to small bugs, centipede bites have never been known to kill a human.

Skin that is punctured by a centipede should be washed with soap and water. Wrap an ice pack in a towel and place it over the bite for 10 minutes, then take it off for 10 minutes. Repeat until the pain and itching decrease.

While they look scary and can certainly hurt, centipedes are actually useful to have around for pest control. Although they only eat every five to seven days, centipedes can help keep down the population of cockroaches, silverfish, and ants without the use of chemicals. Still …

Another bug native to this state, the Texas millipede is generally much smaller than a centipede. At 1 to 1½ inches long, most species of millipedes have fewer than 100 legs, which do not carry venom like some of the legs on a centipede. Here are some other differences between they two scary looking bugs.