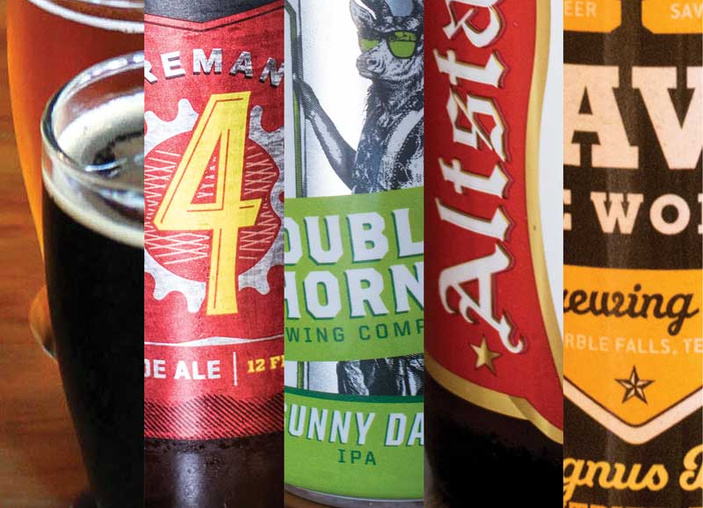 A sampling of craft breweries in the Highland Lakes. Staff photos

The greater Highland Lakes beer trail is growing in both popularity and breweries.

“We all loosely came together to develop that map so people would realize there is such a thing,” she said. “It draws people to the area.”

Along with Pecan Street Brewing in Johnson City and Real Ale Brewing Co. in Blanco, these brew masters share a quest for quality, craft, and experience.

“People interested in craft beers are people who love to explore — they’re adventurous,” said Jackie Bresie of Pecan Street Brewing. “This is a way for them to explore and try new things.”

The growth of microbreweries — especially in Texas, which ranks third in the nation in output — proves the point.

“People are starting to say, ‘I want more from my beer,’” Bresie said. “Part of it is the growing loyalty to local consumerism.”

“People want to know that the person making this beer loves the job and the hops and the grains and the process,” said Double Horn’s Alexander. “Effectively, it’s the magic of taking some water and grain and, a few weeks later, turning them into something completely delicious.”

Alexander equates the process toward palatability to magic, which translates to the community where the potions are brewed. He talks of hops with character, crisp blends that refresh, and a final product that reflects and projects the beauty of its environment.

“We want to share the gift of Marble Falls throughout Central Texas and the rest of the world,” Alexander said. “Marble Falls is such a special place. People everywhere need to know how great it is.”

Attracting both locals and tourists to the adventure of craft beer has become a crusade for these local brewers. Each has a singular approach, offering a unique experience — all the more reason to visit each one.

Perhaps the oldest of the breweries, Real Ale in Blanco, opened in 1996. Real Ale beers are unfiltered and unpasteurized and use water from the nearby Blanco River.

“We’re proud to make our beer with as little processing as possible,” reads its website. “We believe doing less to the beer actually creates more complexity, aroma, and flavor.”

The Blanco brewery has a sister distillery, Real Spirits Distilling Co., which makes gin and single-barrel whiskey. Both are only available in the Real Ale tap room.

Save the World Brewing Co. creates Belgium-style beers known for their elegance and complexity.

“Our favorite aspect of running a brewery is welcoming guests to the tasting room,” Rathkamp said. “We love getting to know our guests and building up a community of people who love to come here. Our focus is on expanding what the tasting room has to offer.”

Save the World recently began selling growlers and six-packs for people to take home. She and husband David continually update their facility, recently adding more seating and a playscape for children. Future plans include a fenced-off area for dogs. All of these additions are aimed at customer comfort and easy enjoyment of their small-batch beer.

“We love coming out with new styles to introduce to our guests,” Rathkamp continued. “We offer tasting-room only, small-batch beers. We get to see immediately the reception each new flavor gets from our guests.”

At Pecan Street, it’s all about the small brew and the local experience.

“We only sell on site,” Bresie said. “We keep seven to ten beers on tap that are really good, high-quality beers. We don’t want to mass produce or distribute to a larger area.”

She was quick to add that she was not dissing mass production. There’s a place for it in the industry as well, she said, echoing the feeling of friendly fellowship espoused by her brother brewers.

“We are not an industry that says ‘stay out,’” Bresie said. “We are united together. We realize the benefit of that synergy.”

For those who have yet to experience the growing craft beer culture in the Highland Lakes, now is the time to raise a mug to the innovative artisans who are making it happen.

Tea time in the Highland Lakes