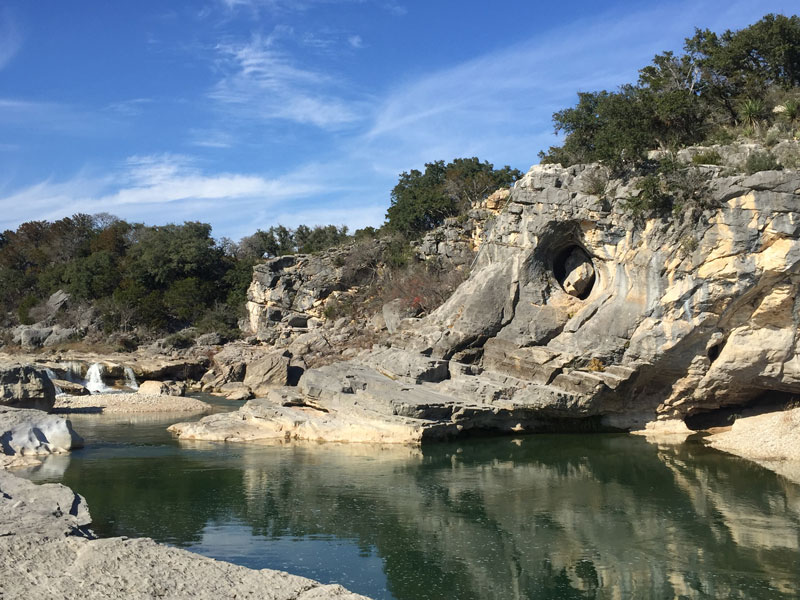 Pedernales Falls is beautiful, there’s no debate about that. The question is, how do you pronounce it? Photo by JoAnna Kopp.

Don’t stick out like a sore thumb when you visit the Highland Lakes. Mispronouncing the name of a city or a landmark is an immediate sign you’re not a local. No need to worry, though, because we put together this handy guide to pronunciation in the Highland Lakes.

How locals say it: Burn-it

Known for being the Bluebonnet Capital of Texas and for hosting the Bluebonnet Festival each year, Burnet County spreads across the Highland Lakes with the city of Burnet at its center. Remember the pronunciation with this simple rhyme: “It’s Burnet, durnit. Can’t you learn it?”

How locals say it: Perd-in-alice

Pedernales Falls State Park is a beautiful piece of the Hill Country just outside of Johnson City, and the Pedernales River flows for about 100 miles through Central Texas. However, only visitors pronounce it the way it is spelled. President Lyndon B. Johnson, whose childhood home is in in Johnson City, pronounced it “Perd-in-alice,” and that’s what stuck.

How locals say it: Lanno

This small rural town is the place to go for deer hunting and true Texas barbecue. Llano is named for the Spanish word for “flat,” based off its wide-open terrain. The double “L” is not pronounced as a “Y” as it would be in correct Spanish. So use a hard “L” when you’re talking about the city or the river.

How (most) locals say it: Kingslind. But if you’re from Kingsland, you’d say “King’s Land.”

Kingsland is another small town that sits at the intersection of the Llano and Colorado rivers on Lake LBJ. The pronunciation is influenced by the locals’ Southern accents and is pronounced with a thick drawl. Don’t worry, though: The difference is so slight, you won’t get called out if you put emphasis on the “A.” For true locals — those who have lived there for generations — it is pronounced “King’s Land” after the man who settled the community. His last name was King, and well, it was his land.

How locals say it: Buh-canan

Lake Buchanan is the first and largest of the Highland Lakes — which, some would argue, makes it the best. It’s named after James P. Buchanan, who was a Texas representative for 24 years in the early 1900s. The spelling alone makes the pronunciation difficult to guess, so locals go for a simple “Buh-canan” instead of the more common “Byoo-canan.”

How locals say it: Blank-o

Blanco is Spanish for “white," and just like with Llano, we threw the proper Spanish pronunciation out the window. Locals pronounce it like “Blank-o” and will surely give you a blank stare if you pronounce it any other way.

How locals say it: They pronounce the “o” like in the word “cow”

If you ever break down in Tow and need a tow (long ‘o’ here), make sure you know you’re pronouncing everything right. The city of Tow is located off the west banks of Lake Buchanan. Locals pronounce Tow like “cow” and tow like “toe.” It’s confusing, but they're OK with it.

Located in Spicewood, Krause Springs is a Hill Country oasis. The park is perfect for camping and the swimming hole is among the best in Texas. Krause is a distinctly German family name that locals make their own by adding an unnecessary syllable.

How locals say it: Oak Alley

The community of Oakalla, located in the northeast tip of Burnet County, was actually named Oak Alley by early settlers of the region because of its unique landscape. When it came time for settlers to have their own post office, it was unfortunately given the name Oakalla, changing the name of the whole city. Locals still call it Oak Alley in homage to the early settlers (or to spite confused travelers).

Keep these tips in mind when visiting the Highland Lakes, and you’ll fit right in with the locals.

You can always tell when a news reporter on TV is new to the area by the way they pronounce these words! You would think that the station would give them a little crash course like this one to help them not sound so "transplanted"! You forgot one tho--Balcones! One of those reporters blew this one the other day! Thanks for this article! It was great!

Great article! You should re-publish it at least once a year to help newcomers assimilate into the local culture!

The eagles have landed in the Highland Lakes

Eagle Eye Observatory near Burnet opens up skies to stargazers