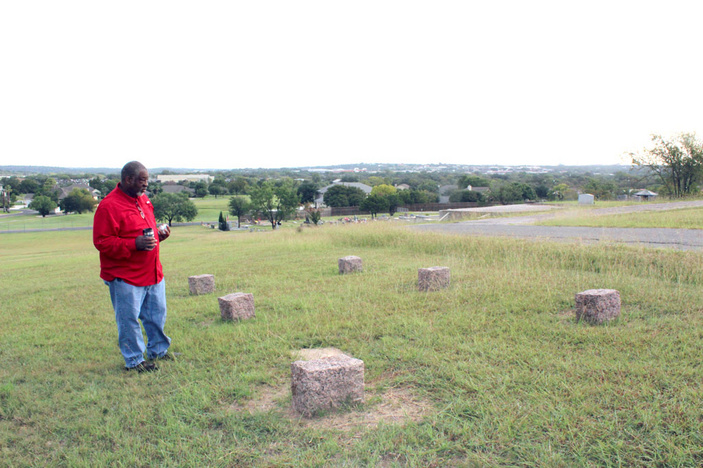 The Rev. George Perry of St. Frederick's Baptist Church of Marble Falls is on a mission to learn the identifies of those buried in unmarked graves in the city's cemetery, many of whom were enslaved people and prisoners. Staff photo

Peek into Burnet County's past — respectfully — at one of its old cemeteries. You'll find Texas Historical Commission markers at several of them. Some of the burial sites are still in use; others have faded into distant memory. All share their silent stories in one way or another.

Here are some of those tales in brief:

Perhaps one of the most well-known inhabitants of this cemetery is trailblazing Marble Falls Mayor Birdie Harwood, the first female mayor in Texas and the first in the United States to be seated by an all-male electorate. She later became the first woman to serve as a municipal court judge.

The cemetery is also the final resting place of many unknown souls, namely the enslaved people who worked local cotton fields and the prisoners who chipped away at Granite Mountain in the late 19th century. These unmarked graves 150 yards from the cemetery's entrance on Avenue N are a mystery that St. Frederick’s Baptist Church has been working for years to solve. The Rev. George Perry of the Marble Falls church is on a quest to learn the identities of each person buried in that section.

This site is the resting place of freed slaves and the only all-Black cemetery in Burnet County. It holds about 70 graves, most of them unmarked. The earliest dates to 1877, the most recent 1930.

The Stringtown community was founded at the end of the of the Civil War by former enslaved people, who soon built a church that doubled as a school. Residents established close relationships with many of the German settlers in nearby Oatmeal.

The cemetery had become largely forgotten until a Burnet County sheriff's deputy happened upon it in 2019 while inspecting a suspicious vehicle parked at the site.

Although the cemetery is on privately owned land, you can view it from CR 326A — but please respect the rights of the property owner.

Veterans of the Civil War through World War II are buried in Oatmeal Cemetery, but the earliest gravesites date to 1854: Mary Smith and her 1-year-old daughter. The Oatmeal name — for the cemetery and the community — came from a Mr. Othneil. German families named the 1840s settlement after the gristmill owner. A cemetery association formed in 1945 and expanded the 2-acre burial site to 3 acres in 1983. The community, however, shrank, but it's well-known in the area for the annual Oatmeal Festival that is co-hosted with nearby Bertram.

More people are buried in the cemetery than reside in the tiny community of Smithwick near Marble Falls. Today's living population is an estimated 50 people; Smithwick Cemetery holds 12 times as many. The cemetery was incorporated in 1857, predating the three settlements that formed Smithwick and three years after the first person was buried there: Rebecca Chambers, 18, who was traveling through the area with her family when she became sick and died. Many of the graves are marked only by rocks.

Surrounded by a rock wall near the Burnet Municipal Airport on busy U.S. 281, the small cemetery was once part of the William H. Magill homestead. The Kentucky native and Battle of San Jacinto veteran moved to the area in 1850 to supply beef and grain to Fort Croghan. It only has five graves, starting with Magill's son, John, who died at 15 in 1863, and ending with Magill's second wife, Elizabeth, who died in 1914.

On FM 1980 about 6 miles northwest of Marble Falls

Brothers Avery and Samuel Tobey bought the land on which this cemetery sits in 1868. The first burial was for Martha and Samuel Tobey's son, N.W., who died in 1872. More than 200 others were laid to rest there. A church and a school were built on the site, but neither remain. The cemetery is the lone landmark for the community.