X
This action is taking longer than it should, you may close this shade or continue waiting

Some annual events have been canceled or shortened due to COVID-19. Check back closer to the date for more details.
Also check the local weather forecast for July 4 before heading out to prepare for the possibility of scattered showers whether you're on the lake or under a shade tree.

The city of Marble Falls on June 29 made the decision to postpone its Fourth of July fireworks show over Lake Marble Falls.

The fireworks show and music festival have been postponed until Labor Day weekend. Some events remain scheduled for the Fourth of July weekend, including the boat parade and golf tournament on July 3 and the poker run on July 4. Visit the AquaBoom Facebook page for details.

The annual Llano Rock'N Riverfest scheduled for July 3-5 has been postponed until Labor Day weekend. Check the website for updates.

The annual fireworks show at this natural springs campground and park in Spicewood has been canceled.

The fireworks show hosted by the Bertram Volunteer Fire Department has been canceled.

The Highland Lakes will have a Fourth of July fireworks show after all, courtesy of Kathy and Fred Cramm of Burnet.  “I always d...

AquaBoom fireworks and music festival postponed, but some events will happen July 4 weekend

History has a way of repeating itself.  A new bridge over the Llano River in Kingsland connects the small community to thousands of vi...

On June 14, Americans celebrate Flag Day in honor of the Stars and Stripes. With its 13 alternating red and white stripes and 50 white stars...

Four Treats for the Fourth of July

This Fourth of July, party like it’s 1776. The sun will be high in the sky as temperatures are expected to hover near triple-digits.&n... 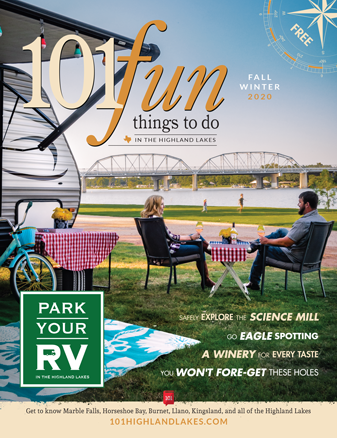