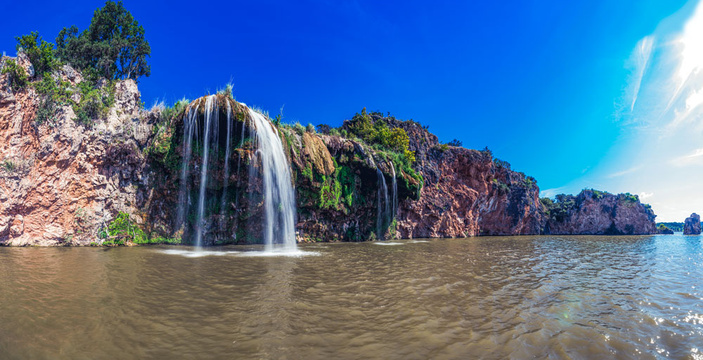 A Highland Lakes oasis, Fall Creek Falls on Lake Buchanan is about an hour-long boat ride from the free boat ramp in Llano County Park next door to the LCRA's Black Rock Park. Photo by Ronnie Madrid/Divine Radiance Photography

On most days, southwest winds blow 15-20 miles per hour across the expanse of Lake Buchanan. The biggest body of water in the Highland Lakes chain, it measures nearly 5 miles across at its widest point and is 30 miles long. Boaters familiar with the manmade reservoir are used to the choppy waters — just one of the many intriguing aspects of the lake.

On one particularly lazy summer day, explorers upon a pontoon boat experienced a blissfully smooth surface and an unusually cool July breeze. They were on a leisurely trip from the Llano County Park boat ramp in the southwest corner of the lake to Colorado Bend State Park in the north. With multiple stops along the way, the expedition took about five hours.

Stocked with sandwiches, drinks, and cookies, a quest to see four falls along the Colorado River began with a quick side trip south of the boat ramp past a red and white lighthouse and lusciously landscaped lawn to Buchanan Dam. The expanse of concrete was intimidating at 2 miles long and 145 feet tall. Completed in 1938, the dam has 37 floodgates and a rich political history — but that’s a story for another day. 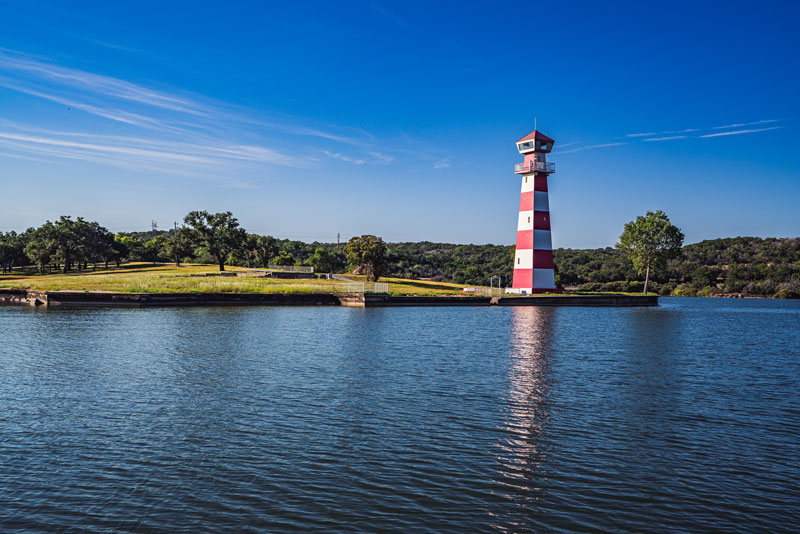 A lighthouse juts out into a calm Lake Buchanan. Photo by Ronnie Madrid/Divine Radiance Photography

The lighthouse and shoreline leading up to the dam are part of Citizens Academy, a well-appointed meeting and training facility owned by Citizens Inc., an insurance holding company headquartered in Austin.

In front of the dam, buoys keep boaters back from the structure. Due to the terrorist attacks on U.S. soil on September 11, 2001, boaters are no longer allowed to nose up to the concrete walls. From the legal side of the buoys, the boat’s depth-finder measured 101 feet. The lake reaches 132 feet at its deepest point, according to the Lower Colorado River Authority, the entity in charge of the dams along the Highland Lakes chain.

Next, the Sun Tracker pontoon boat headed up the middle of the lake toward Shaw Island, which juts out from the west side almost halfway across to the eastern shore. The “island” is actually a peninsula and home to part of the community of Bluffton. The original town, known as Old Bluffton, rests underwater and can only be seen when the lake is down at least 30 feet. Shaw Island is a favorite hangout for boaters and swimmers on summer weekends.

The boat slowed as it passed the peninsula, carefully making its way around a sandbar just off the eastern shore. The red gravel sandbar is a favorite place to abandon ship. The shallows are safe for kids to splash around in, and its gradual slope into deeper water allows for leisurely swimming and floating.

The shoreline of Garrett Island, just a bit farther north, is another good place to stop and play. Chips of gold and black mica mix with pink and crystal granite sand that sparkles in the sun along the island’s coral-colored beach. Sun-kissed skin dusted with natural glitter was an added bonus of the trip.

The journey past Garrett Island slowed as the boat followed a path of buoys through a submerged forest of dead trees and brush. The foliage took root in the dry lakebed during the last major drought from 2010-15. 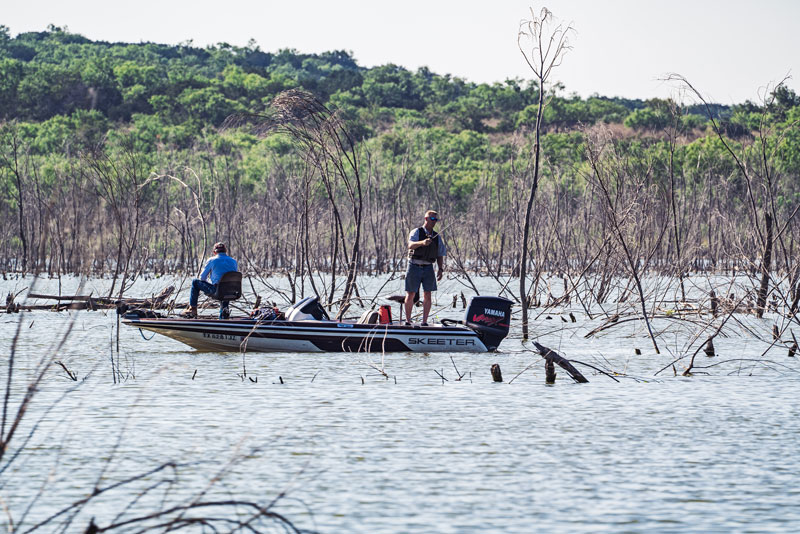 Lake Buchanan is popular with anglers casting for catfish and white and striped bass. Photo by Ronnie Madrid/Divine Radiance Photography

Occasionally, the crew aboard the Sun Tracker spotted anglers in fishing boats casting among the gray branches. They also spotted two damaged boat docks dislodged from the shoreline in the October 2018 flood trapped among the tree trunks.

The dead trees and damaged docks lent a mythic feel to the odyssey for the falls, especially as the boat left the lake behind and wound through chalky white, orange, and black rock canyons spotted with oak, cactus, yucca, and cedar. Perched along the steep slopes of the canyon walls, wild sheep nibbled on tenacious grasses. The water was a deep olive green; trills of birdsong and an engine’s soft hum the only sounds.

Approximately an hour after launching, the Sun Tracker arrived at the first of the falls. The aptly named Fall Creek pours over a rocky canyon edge into the river, creating a cooling mist and sprays of sparkling water among ferns, ivy, and soft green moss. To the right, as the boat approached, a massive column of white and orange rock loomed: Scylla and Charybdis without the monster. 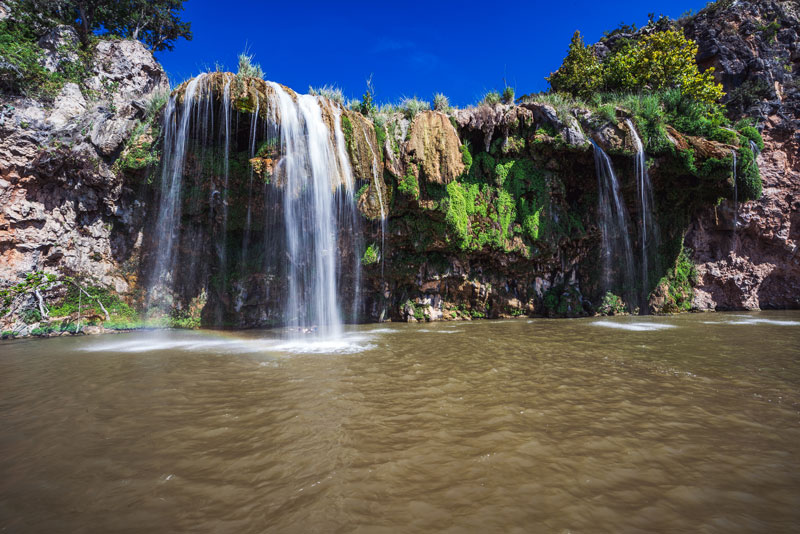 Fall Creek Falls inspires and relaxes. The crew grabbed pool noodles and life vests, splashed overboard, and made their way behind the curtain of water. Looking up through the spray, speckled sunlight turned an array of droplets into a rainbow of moving color. No one wanted to leave.

On to the next falls, which some call False Falls. Not much water, but plenty of evidence that, at one time, a torrent wore jagged rock into smooth, solid mounds that look like melting wax. Again, ferns and moss flourish among the yucca and prickly pear. Water seeps in small rivulets through cracks in the rock steadily feeding the river.

Around a corner, farther upriver, another falls runs along a slope from an opening in the rock — like a ramp leading out of a cave. Only small boats can make it into this cove, where swimmers appear to walk on water as they balance on boulders just below the surface.

Back into the main part of the river, upstream where Colorado Bend State Park begins starboard, port-side falls generated thoughts of King Kongs’ Skull Island. The wide face of the falls form an oversized jaw, nasal passage, and eye sockets, making even the gargantuan gorilla seem small. It was an apt place to turn around and head back to open water for lunch and a few stops to swim among the sparkling granite and gold sandbars and beaches.

The adventurers returned with glowing skin, pink noses, and renewed spirits along with lots of photos, the best of which can be found at 101HighlandLakes.com/lakebuchanan. Enjoy the journey. We sure did.

5 reasons to stay on Lake LBJ

One of the better ways to experience Lake Buchanan is with Vanishing Texas River Cruises, which has a variety of year-round cruise options, dependent on weather and lake levels. Even in the drought years, however, Vanishing Texas puts together a tour that includes scenic views, wildlife, and even an underwater ghost town.
Check the schedule and purchase tickets online at vtrc.com or call 512-756-6986. Board a ship at 443 Waterway Lane in Burnet.