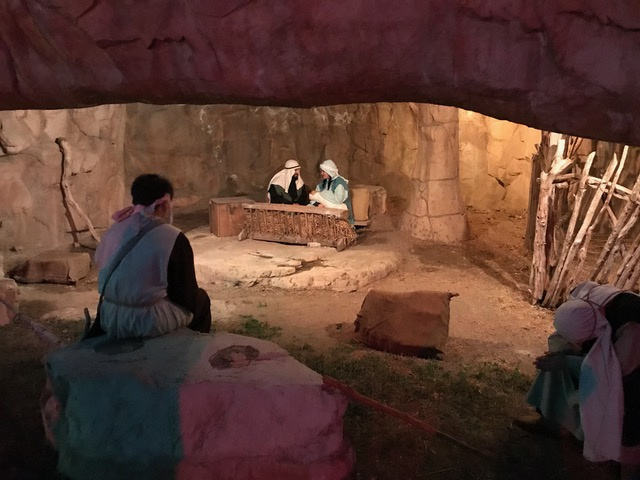 Away in a manger, no crib for his bed, the little Lord Jesus lay down his sweet head, this time in downtown Burnet, where First Baptist Church brings the entire town of Bethlehem to life in a re-creation of life during Biblical times. Photo by Suzanne Freeman. Photos below by Jennifer Greenwell

I only had to travel to the heart of Burnet to be whisked back in time and thousands of miles away to a tiny hamlet near Jerusalem on a chilly winter’s night. While the shepherds and wise men followed a star, I followed the directions in my copy of the 101 Highland Lakes Christmas Lights Guide to Main Street Bethlehem, a realistic re-creation of the town and time of Jesus’s birth. 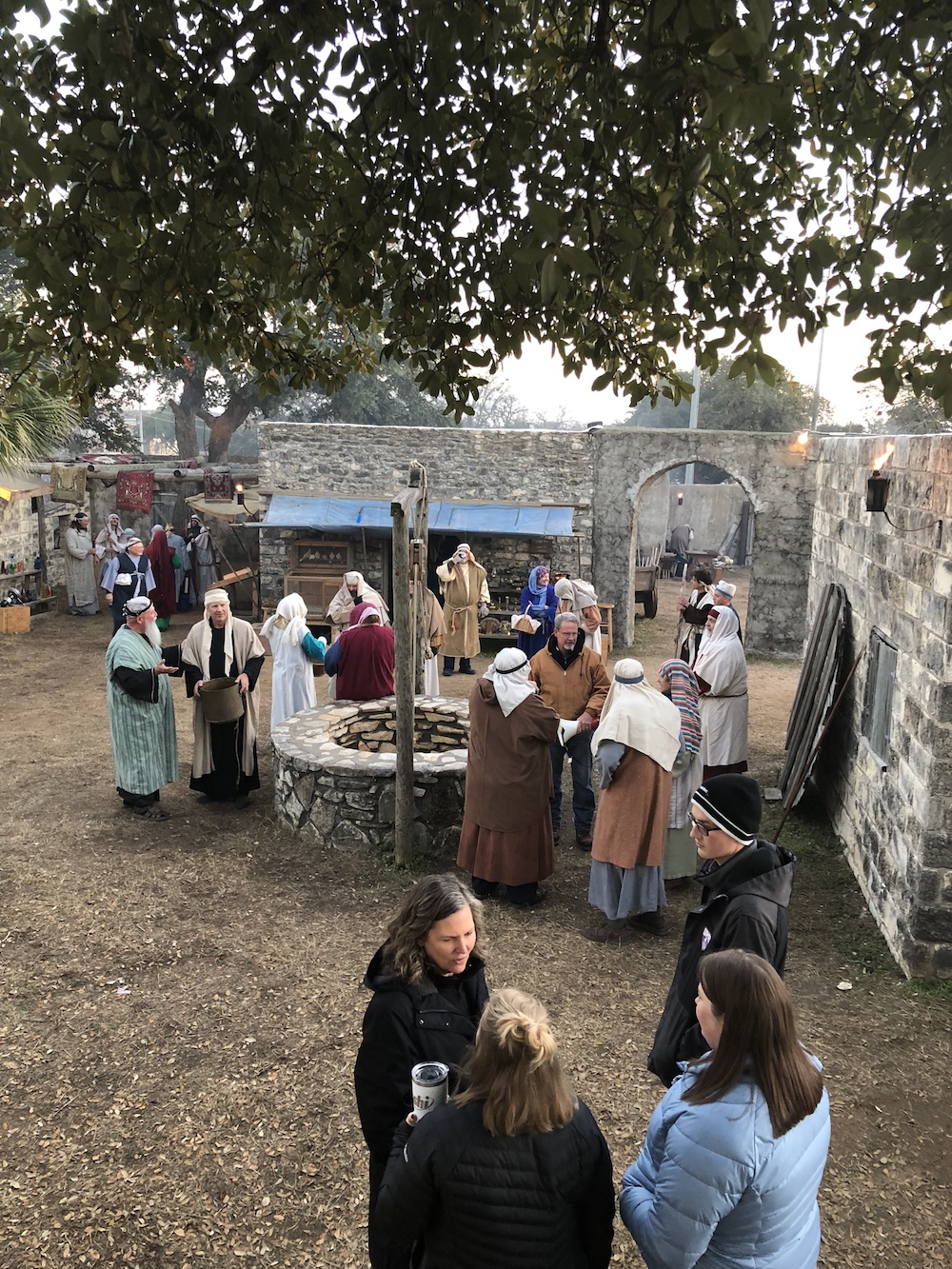 Once I stepped inside the gates at the corner of South Boundary and East Washington, just a block off the town square, I was captivated by the sights, sounds, scents, and tastes of an ancient city alive and in action on a very special night. I could sense the anticipation as I heard the word traveling along the streets, in the shops, and through the open windows of stone houses that a savior had been born. Some were skeptical, others excited. The thrill of anticipation was contagious. As the people in the city went about their daily lives, they happily stopped to converse with visitors wanting to know what the buzz was all about. 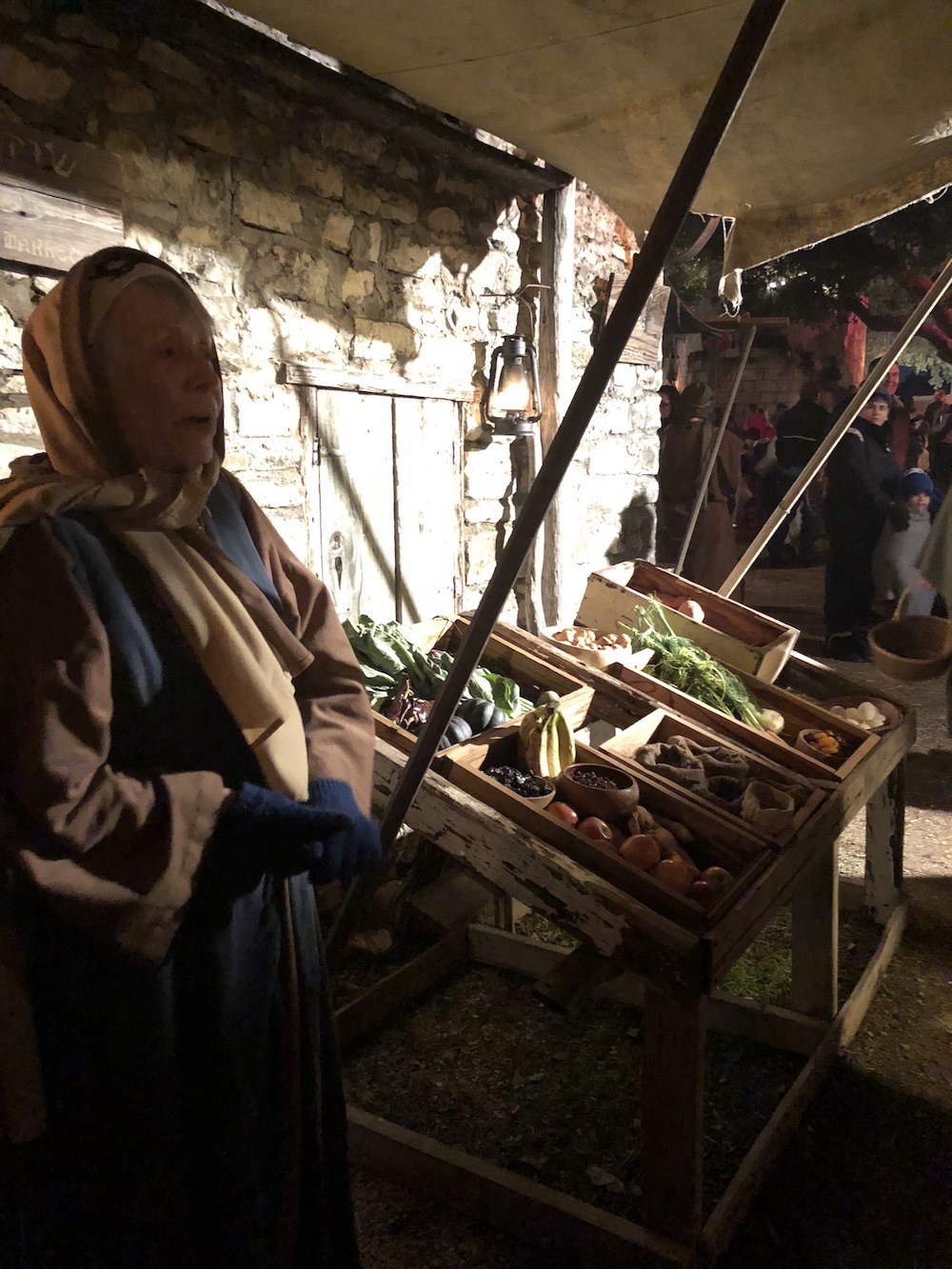 I found woodworkers, basket weavers, candlemakers, potters, bakers, and other craftspeople busily preparing for the influx of people arriving to pay their taxes. In one corner, a Roman guard stood sentry over a tax collector consulting with a spy as a sheep herder tried to explain that all the creatures on the hill beyond were not actually his.

“Yes, there are forty sheep there,” he said after the spy whispered in the collector’s ear. “But I have sold fifteen of them, and the new owner has yet to pick up ten of them.” 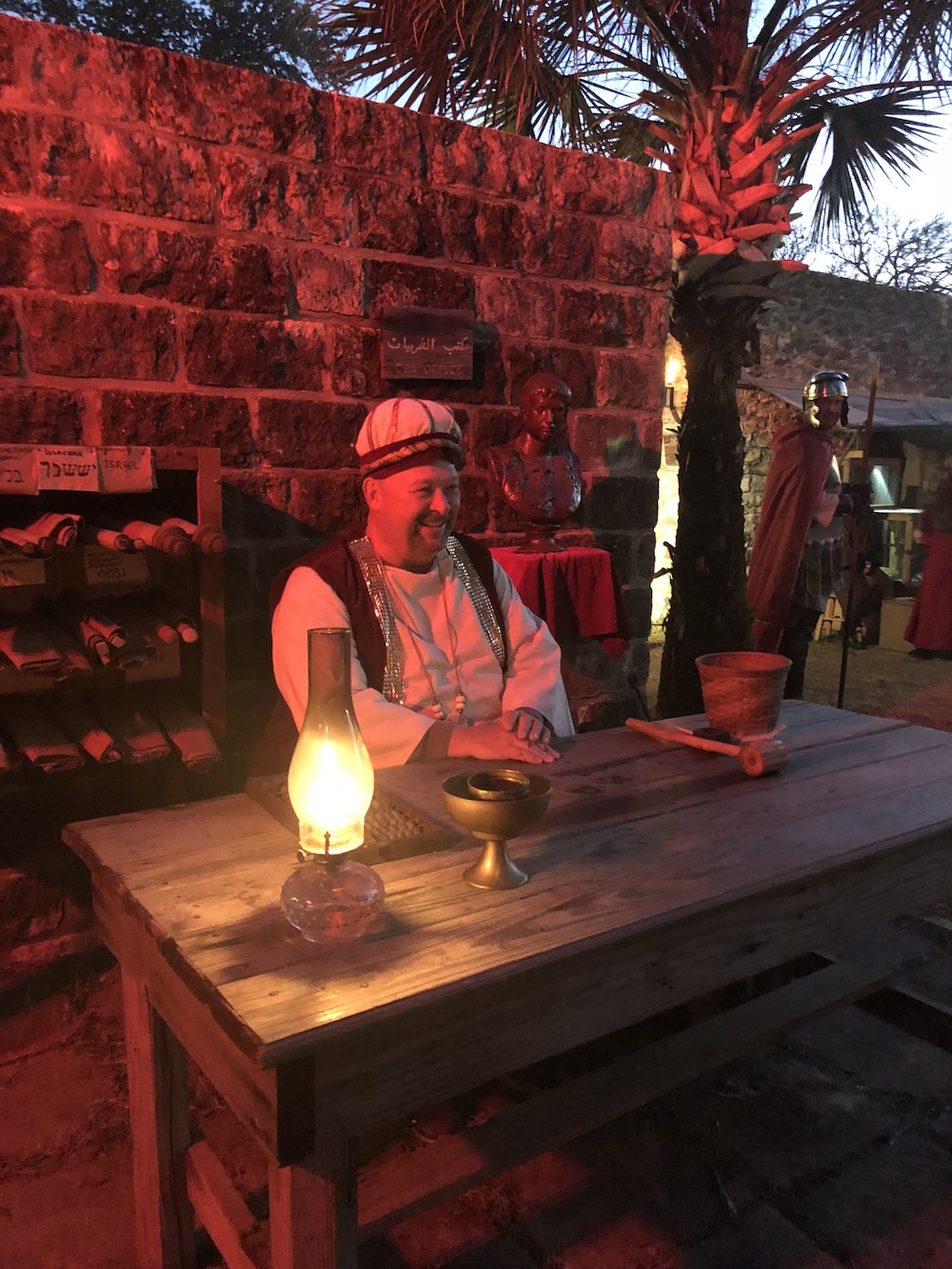 “Three shekels,” said the collector as the land owner protested. “Two for the emperor, one for the temple.”

Lamps, candles, torches, and campfires cast a warm glow over the town. I caught a hint of incense in the air. A baker handed out samples of delicious, freshly baked bread, while two young girls ground corn with stones for the meal. I never wanted to leave this tiny hamlet of cozy rooms, weavers, merchants, and travelers camped around their cooking fires. 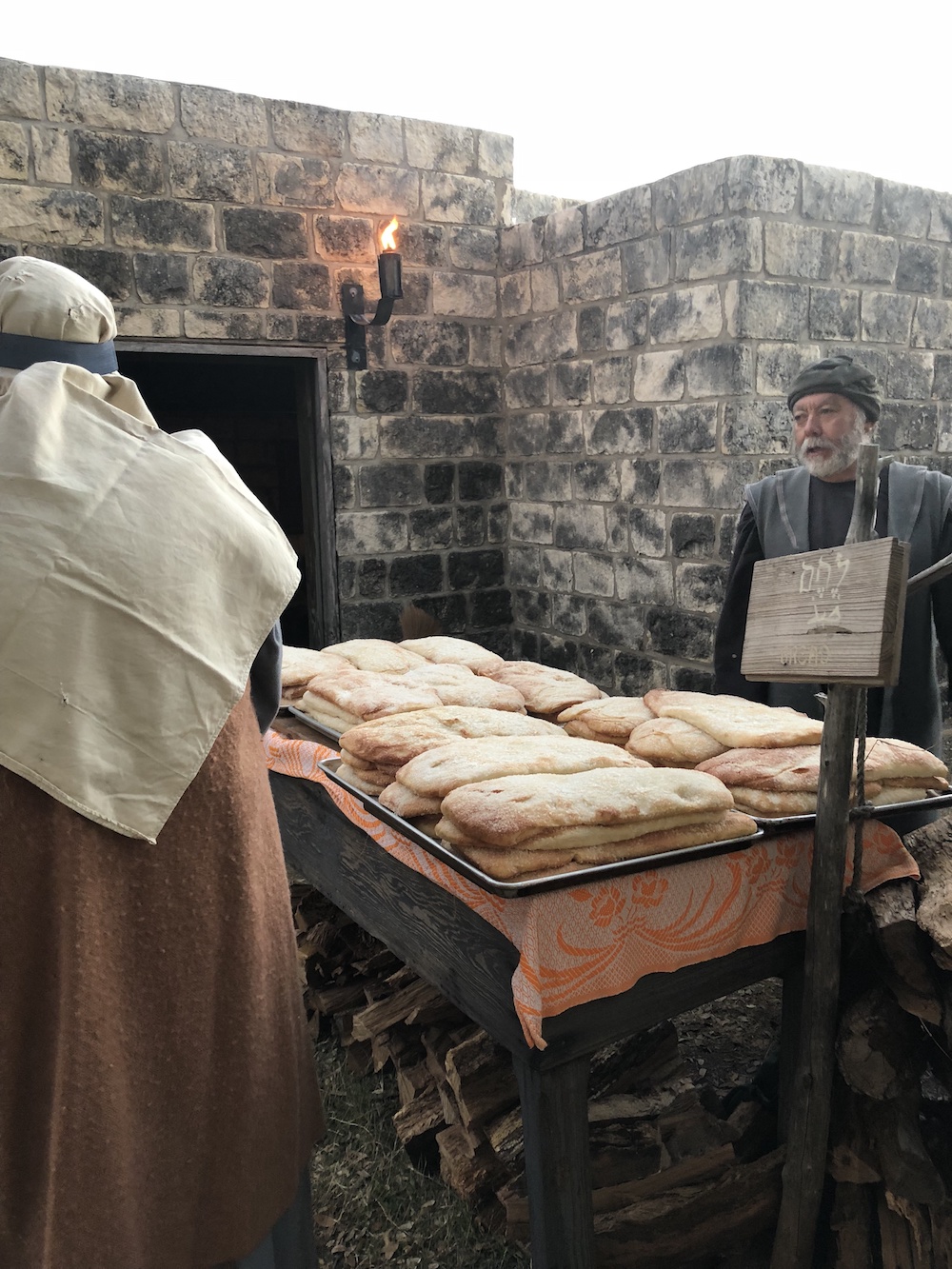 Once I had visited each shop and home, the inn, jail, synagogue, and tax collector, I finally decided to follow a large, distinctive star that hung over us all. The star danced high above a simple stable nestled in a shallow cave. Inside, a young couple talked quietly, beaming over their babe wrapped in swaddling clothes. Townspeople came and went at the entrance of the stable, pausing for awhile in admiration of the newborn. This is what all the talk was about, it seems, an infant lying in a manger. 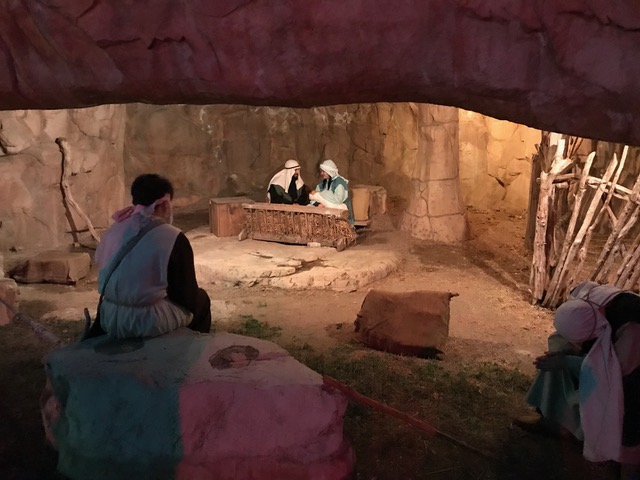 Visitors to the city also stood for a time, taking in the scene and perhaps wondering about the actual night being portrayed as shepherds knelt in prayer before the babe.

As I left the little town of Bethlehem, I felt a sense of wonder. Passing by Bible verses posted along a winding corridor, I had time to take in the amazing scenes left behind.

Re-entry into modern times included a free cup of hot chocolate, cookies, and a chance to share my experience with others.

Main Street Bethlehem, 300 E. Washington St., is sponsored by First Baptist Church of Burnet and runs two consecutive weekends each December. Admission is free, but donations are greatly appreciated. The final weekend for this spectacular event is Dec. 14-16. The gates open at 6 p.m., but the line begins early, so try to get there no later than 5:30 p.m. Gates close at 9 p.m.