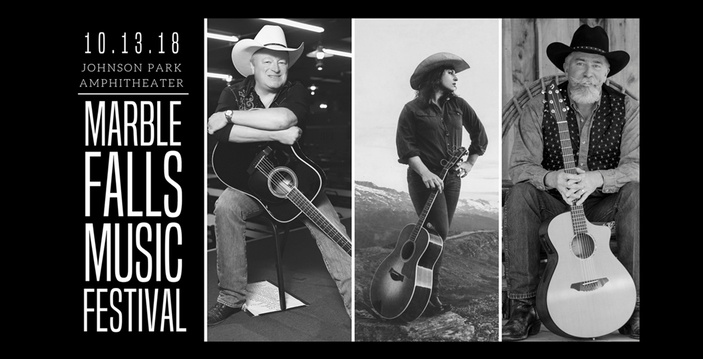 The Marble Falls Music Festival is Saturday, Oct. 13, at the Johnson Park amphitheater. Mark Chesnutt headlines the show. A variety of other performers, including Sarah Peacock and Mike Blakely, will entertain the crowds throughout the day. Local breweries and wineries will be on hand as well as food trucks and vendors.

One of the toughest challenges in creating a music festival is pulling together a lineup that covers a range of tastes yet hangs close to a particular genre.

In that respect, the Marble Falls Music Festival nails it.

“They all have a country music flair, but they each bring their own style to the music and their show,” said Patti Zinsmeyer of the Marble Falls/Lake LBJ Chamber of Commerce. “We’ve put together a great show that people are going to enjoy, whether they love the more traditional style of country music or enjoy the singer-songwriter performer.”

The Marble Falls Music Festival is Saturday, Oct. 13, at the Johnson Park amphitheater, 230 Avenue J in Marble Falls. Tickets are $25 in advance and $35 the day of the event. Go to MarbleFalls.org/MFMF to purchase them online. Gates open at noon, and the event rolls on through the day and into the night, capped off by country music superstar Mark Chesnutt at 9 p.m.

Chesnutt is definitely reason enough to make the trip to the Marble Falls Music Festival. He earned his country music chops, one might say, while performing in the honky-tonks around Beaumont, but with his ability to bring a song to life and solid vocals, Southeast Texas couldn’t contain him for long.

He burst onto the scene, and fans discovered someone who exemplifies the more traditional country sound. Since releasing “Too Cold at Home” in 1990, Chesnutt has earned 14 No. 1 hits, 23 top 10 singles, four platinum albums, and five gold records.

He’s done it without the need for highly choreographed stage shows and over-the-top productions. He relied on his solid country sound and a knack for connecting with the crowd.

“You could almost stop with Mark Chesnutt, and maybe one act before him, and you’d have a pretty good concert,” Zinsmeyer said. “But we wanted to make this into a festival where you can spend the day experiencing a lot of great music here in Marble Falls.”Zinsmeyer and the Marble Falls/Lake LBJ Chamber of Commerce built on the framework of the former FiestaJAM, started by musician John Arthur Martinez and producer Robert Linder. After organizing FiestaJAM for several years, the two approached the city of Marble Falls and the chamber to consider taking it over. They and a cadre of volunteers had formed the foundation of the festival, but with the chamber’s staff and expertise in developing, coordinating, and hosting events, everyone saw an opportunity to take the festival to the next level.

“For the chamber, we see this as a chance to make this into one of our signature events,” Zinsmeyer said. “We’re going to take the Marble Falls Music Festival and continue to grow it into a great event that people will look forward to every year.”

Based on the inaugural festival, they are off to a great start.

With Chesnutt anchoring the Marble Falls Music Festival, organizers have built a great lineup of performers, including rockabilly band Two Tons of Steel, which takes the stage at 7 p.m.

Known for combining punk rock with country, Two Tons of Steel separated itself from the Nashville sound — in a big, but great, way. Since hitting the San Antonio scene in the 1990s, Two Tons of Steel has matured as members become stronger musicians and performers, but don’t mistake “mature” with “mellowed.” This group could get a devout Lutheran congregation out of their seats and dancing in the aisles.

Peacock takes the stage at 5 p.m.

She definitely has a storytelling element in her songs, which transforms her performances into a musical experience. As the staff began putting together the festival, they wanted to maintain a Highland Lakes connection. They could have gone all over Texas and the country to assemble the lineup, but Zinsmeyer said part of the theme includes “keeping it local.”

Three of the Highland Lakes’s best and most celebrated musicians take the stage at 2 p.m.: John Arthur Martinez, Mike Blakely, and Pauline Reese.

Let’s face it: Any one of these three can command a performance, but put all three on the stage at the same time or within a few sets of each other, and the Marble Falls Music Festival has created a festival within itself.

Martinez crafts songs that, when you listen to them, make you feel like you’re having a conversation with an old friend. He might have traveled the world, but Martinez, or JAM as he is called, reminds us that our hometown and families are among the best things about us.

As for Blakely, he serves up cowboy music but in a way that you don’t have to know a remuda from a night hawk. An award-winning Western novelist as well, Blakely weaves a sense of story into his songs making you feel like your right there in the scene.

When it comes to Reese, she’s one of those performers you have to see to “get.” Reese has carved a loyal following in the Highland Lakes and surrounding area, but she’s no stranger to the rest of the world, recording with the likes of Willie Nelson and helping out Miranda Lambert.

Reese brings amazing vocals to each of her songs, and leaves audiences wishing each song lasted for hours, not a few minutes.

Local singer Kale Stephens gets it all rolling at noon.

The Marble Falls Music Festival celebrates what makes the Highland Lakes and Central Texas such a musical stronghold.

And the local connection doesn’t end there. Zinsmeyer pointed out they’ll have a number of local wineries and breweries on hand giving everyone a taste of the Highland Lakes and Hill Country. The wineries include Torr Na Lochs, Flat Creek, Spicewood Vineyards, and Fall Creek. On the beer front, Save the World Brewing Co. and Double Horn Brewing Co. will have several of their locally crafted beer.

There will be tastings available from noon-5 p.m. with representatives on hand to discuss their beers or wines. But wine and beer sales will be available during the entire music festival.

There will also be many food vendors at the festival.

Along with building on FiestaJAM roots, the Marble Falls Music Festival is also dedicating proceeds from a silent auction, bottled water sales, and parking to area youth music programs. One of the reasons Linder and Martinez started FiestaJAM was to support youth music, and Zinsmeyer said the chamber is committed to staying that course.

“The Marble Falls Music Festival is only going to get bigger and better,” Zinsmeyer said. “And it’s starting out as a music festival you don’t want to miss. And what better place to enjoy a day of music than among the pecan trees of Johnson Park.”

Go to MarbleFalls.org/MFMF for more information.