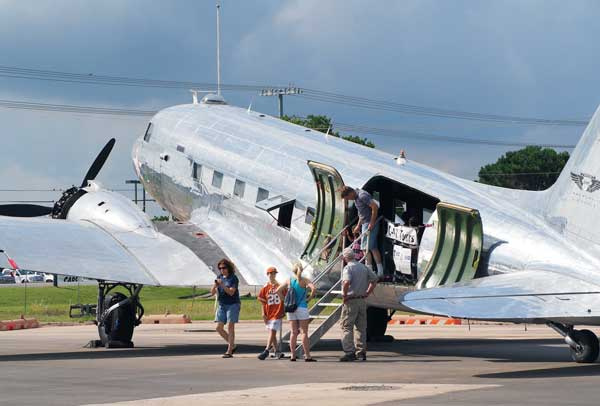 The 25th annual Bluebonnet Airsho is noon-4 p.m. Sept. 10 at the Burnet Municipal Airport. Gates open at 10 a.m. Admission is $15 for adults, $10 for seniors and military members, $5 for ages 6-17 and free for ages 5 and younger. Staff photo by Daniel Clifton

BURNET — As the month of April edged closer, the Highland Lakes Squadron of the Commemorative Air Force members realized they faced a major issue. With the city of Burnet in the midst of renovating and upgrading the municipal airport, the squadron would have to postpone the annual Bluebonnet Airsho.

This was even tougher since 2016 marked the 25th anniversary of the popular spring event.

“It’s always a challenge to do something different, but we had planned and prepped for doing our event in the fall,” said Mark McCary, a squadron member and air show coordinator. “But all things considered, all the acts down to a ’T’ rebooked with us. We’ve actually added some static displays and aircrafts.

“It should be a pretty good show,” he continued.

The 25th annual CAF Bluebonnet Airsho is Saturday, Sept. 10, at the Burnet Municipal Airport, located on U.S. 281 on the south side of the city. The gates open at 10 a.m. with the actual show from noon-4 p.m. Tickets are available online at bluebonnetairshow.com. Admission is $15 for adults, $10 for seniors and military members, $5 for students 6-17 and free for children 5 and younger.

The Highland Lakes squadron is excited to get the show back in the air, but the members understand the change in time might throw the folks who always have it penciled in for April. But when organizers looked at the calendar for potential dates, Sept. 10 popped to the top of the list because it didn’t conflict with any other major air shows across Texas or the country.

Plus, September would be a bit cooler than the main summer months.

The heart of the event, however, is the aircraft.

McCary said this year’s air show includes the regular mix of aircraft from modern to classic warbirds. And there’s a reason for that.

“The classic warbirds, they’re a demonstration of our aviation history, while the (current) military aircraft show what it takes to defend our nation,” McCary said. “And the gymnasts of the air, what we call our aerobatic planes, they show what aircraft can do. And they’re fun to watch.”

This year’s event includes quite a selection of aircraft. The U.S. Army is flying three helicopters down from Fort Hood: a Chinook, a Blackhawk and an Apache. Though those aircraft won’t participate in the show, McCary said it’s an honor to have them on display.

Of course, the Highland Lakes squadron’s complement of aircraft, including the C-47 Douglas Skytrain “Bluebonnet Belle,” will be participating. Other notables include the B-25 (PBJ-1J) Devil Dog, the B-25 Mitchell “Yellow Rose,” the P-51D Mustang “Pecos Bill,” a P-39 Lightning, and Falcon Flight, a Texas-based formation flying team.

But that’s just a few of the confirmed aircraft and teams.

While the event definitely showcases what aircraft can do and how they’ve contributed to the history of the world, McCary said there’s another reason for the event: connecting people with aviation.

McCary’s own father told Mark how, as a child, his first connection with aircraft was with pilots landing in the nearby community. His father went on to pilot P-51s during World War II. And for McCary, his love of aviation developed while seeing the warbirds and other aircraft at shows such as the major one in Oshkosh, Wisconsin.

McCary said many of the Highland Lakes squadron members, such as former squadron leader and Air Force veteran Vernon Rooze, found their way into aviation through air shows and the Commemorative Air Force.

“Without flight demonstrations like this, the only way people would probably experience or interact with aviation is at large airports,” McCary said.

He added that the programs like the Commemorative Air Force also open up opportunities for people — particularly younger ones — to interact with veterans, learn about aviation and even help maintain these incredible aircraft.

“I don’t know of any other nonprofit that offers the support to work with machinery, these types of aircraft and work with the veteran pilots of that era,” he said.

Go to bluebonnetairshow.com for more information.