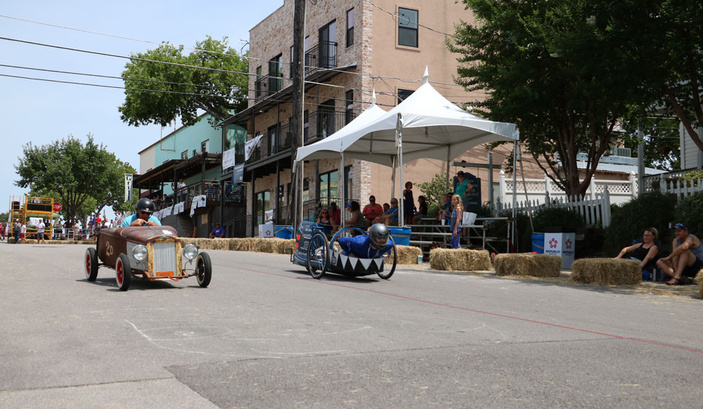 The Marble Falls Soapbox Classic is April 26-28 in historic downtown. The event begins at 6 p.m. that Friday with a Show-and-Shine and parade followed by opening ceremonies at 7 p.m. and racing under the lights until midnight. Staff photo by Jared Fields

The path to glory at the Marble Falls Soapbox Classic starts atop the Third Street hill as drivers prepare to barrel down 1,200 feet to the bottom at 30 mph.

One of those drivers is Taylor Smith of Marble Falls.

Smith is driving one of 35 cars competing at the 10th annual adult soapbox derby. The event is Friday-Sunday, April 26-28, in downtown Marble Falls on Third and Main streets. Racing registration for the event is closed, but there’s plenty of room to watch the action.

The Marble Falls Soapbox Classic begins Friday with a Show-and-Shine and parade at 6 p.m. followed by opening ceremonies at 7 p.m. and racing under the lights until midnight.

At about lunchtime that day, you can help make an 8-foot pizza, which will sell for $3 a slice. The pizza will be cooked on site in a pit. Vendors will have other food as well.

Also on Saturday, RockPile Church is hosting a kids’ tent where children can make their own handheld derby cars.

On Sunday, the racing finals are noon-4 p.m. with an awards ceremony following.

There is no admission to watch the races. Spectators can bring lawn chairs and small shade tents but no coolers.

“We’re one of the few free things you can bring your family to,” Smith said.

The Marble Falls Soapbox Classic was traditionally held on Father’s Day weekend in June, but organizers moved it to April this year to take advantage of cooler temperatures.

Smith drives a car he calls Land Shark. He built it to where he has to lie on his stomach, flying down the hill “face first in an open canopy.”

“I’m hugging the ground as close as possible,” he said. “It’s really exhilarating.”

Smith started as a pusher, literally pushing cars to the starting line, and had a great time doing so. He started driving in 2012 after he and fellow Highland Lakes resident Grant Dean spent a year building Land Shark.

“That first race was nerve-wracking,” Smith said. However, “It hooked me right in.”

Last year, he was second in the Giant Slalom division.

He credits many people for the derby’s success, noting the friendly rivalries that have developed on social media while promoting and tweaking the event.

“People from all walks of life meet up and race down a hill,” he said. “We hope we have an awesome crowd this year.”

Go to adultsoapboxderby.com for more information.