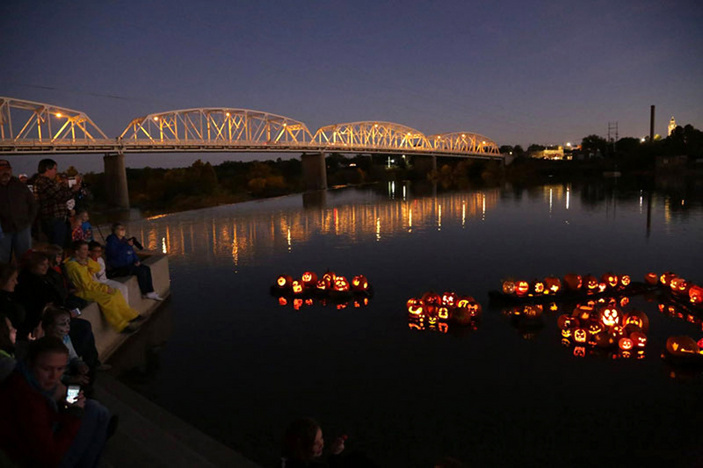 The Llano River Pumpkin Float is 5-8 p.m. Saturday, Oct. 30, at Badu Park in Llano. Anyone can bring a carved pumpkin to participate in the annual tradition. Photo by Lou Quallenburg

Halloween pumpkins float down the river in style during the annual Llano River Pumpkin Float from 5-8 p.m. Saturday, Oct. 30, at Badu Park, 300 Legion Drive in Llano.

The event is free to the public, and anyone can bring a carved pumpkin to float. Drop off pumpkins from 5-6 p.m. at the park. Volunteers gather them up, take them out into the river on boats, light them, and turn them loose in the river’s flow.

Candlelight through Jack-o-lantern eyes reflects off of the surface of the river, setting up a stunning spectacle with the Texas 16 bridge in the background. Last year, the float had 77 pumpkins.

The Wildflower Dance Studio joins the fun this year with two performances at 5:30 and 6:30 p.m.

The float began in 2006 when several Llano-area residents wanted to create a fun activity that drew the community together. A family-friendly activity, it also celebrates the arts. Initially, it was a pumpkin carving contest, but in 2016, it became the Llano River Pumpkin Float.

The mission remains the same: celebrate the arts, families, and community.

Visit the Llano River Pumpkin Float’s Facebook page or call the Llano Chamber of Commerce at 325-247-5354 for more information.