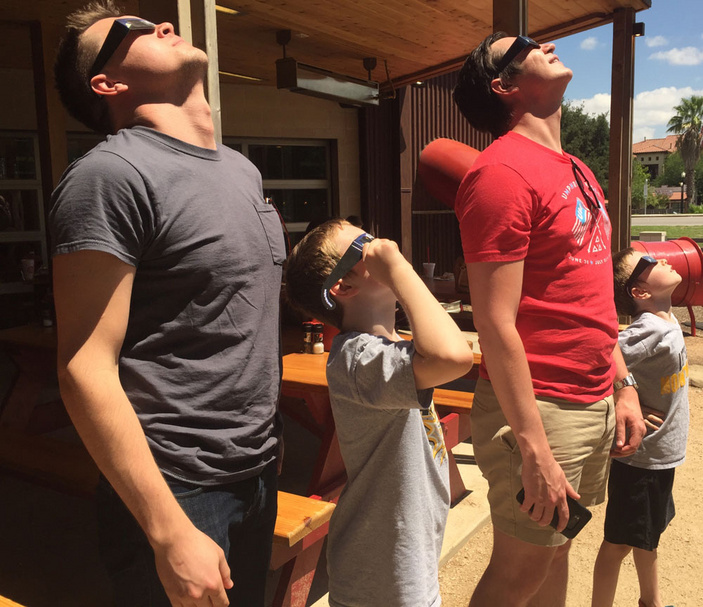 As the Highland Lakes prepares for prime viewing of the April 8, 2024, total solar eclipse traveling from Mexico to Maine, local businesses and entities may find it an economic boon as communities and even states reported big benefits from the Aug. 21, 2017, event, which crossed from Oregon to South Carolina. Staff photo by Daniel Clifton

Enchanted Rock State Natural Area will be the best place to watch the next total eclipse of the sun — a phenomenon that happens only every 100 years or so. The next one will begin at approximately 1:33:22 p.m. April 8, 2024, and last for 4 minutes and 26 seconds.

Yes, that’s four years away, but it never hurts to get an early start planning, especially when Enchanted Rock is your destination. Reservations are always necessary at the popular park, which often fills up to capacity with campers and day trippers.

For this next eclipse, Texas in general will be the best state to catch it. The peak will occur near Nazas, Durango, in Mexico.

The solar eclipse will enter Texas near Del Rio and cross northeast.

Other communities across the Highland Lakes due for great views are Lake Buchanan, Marble Falls, Llano, and Burnet. Lake Buchanan’s prime viewing begins at approximately 1:34:39 p.m. Marble Falls, Llano, and Burnet will begin experiencing totality at about the same time, though the duration will be about 7 seconds longer for Burnet and Llano: about 4 minutes and 21 seconds, due to their locations nearer the centerline.

The total eclipse won’t be just a celestial phenomenon; it could be an economic one as well.

During the Aug. 21, 2017, eclipse, states and cities along the path recorded big bumps in their economies.

The state of Wyoming reported the total solar eclipse brought about 192,000 people into the state and 69,000 residents traveling for a better view of it. This pumped in roughly $63.5 million into the Wyoming economy.

That sounds like a lot but pales in comparison to the effect it had on South Carolina’s economy. The state reported the 2017 total solar eclipse poured $269 million into the economy, with more than 1.6 million people traveling to or around South Carolina to get a view.

Ravenna, Nebraska, a town of 1,300 residents, welcomed about 40,000 visitors for the 2017 eclipse. All this meant big business for the local economies.

The Highland Lakes, with its proximity to Austin, San Antonio, and even Houston, could also reap economic benefits from the coming eclipse. The 2024 eclipse could have people and economies looking up.

Wouldn't it be wonderful if all the localities would release restrictions and allow us to have rvs on our lots for at least one night?

Happy STEM-Giving at the Science Mill