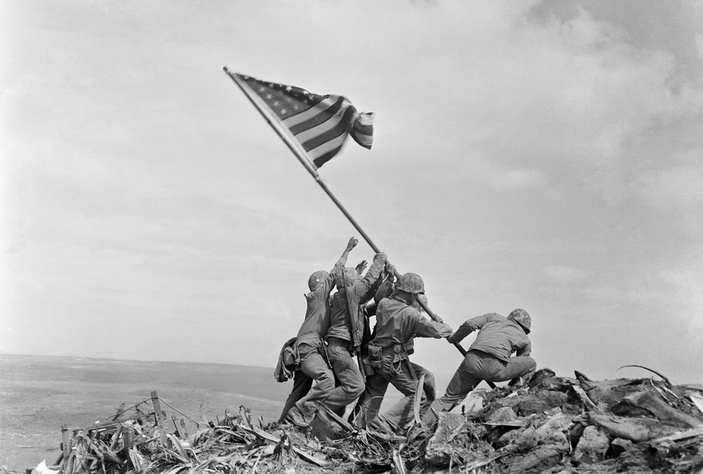 Five US Marines and a Navy corpsman raise the flag atop Mount Suribachi on February 23, 1945, during the Battle of Iwo Jima. Photo by Joe Rosenthal

With its 13 alternating red and white stripes and 50 white stars set against a dark blue field, America's Old Glory is perhaps the most recognizable flag in the world. For many, it is a symbol of freedom and independence. But what do you really know about America’s red, white, and blue? Here are some facts and other interesting tidbits about the U.S. flag that you can share with your friends on Flag Day in June or the Fourth of July, the flag-wavingest days of the year.

• The Second Continental Congress passed the Flag Resolution on June 14, 1777, stating, “… that the flag of the United States be thirteen stripes, alternate red and white; that the union be thirteen stars, white in a blue field, representing a new constellation.”

• The resolution did not specify a particular arrangement of the stars.

• Upon seeing the flag flying over Fort McHenry in Baltimore during the War of 1812, Francis Scott Key wrote “The Star-Spangled Banner” in September 1814.

• William Driver, a Massachusetts sea captain, gave his 10-foot-by-17-foot American flag the nickname, “Old Glory.” The flag, which was handmade by his mother and some female admirers in Salem, hung from the mast of his ship, the Charles Doggett, in 1824. After retiring from the sea and moving to Nashville, Tennessee, he continued to fly the flag — stars were added for additional states — even during the Civil War, which caused quite a stir among Southern Confederates.

• Then-Colonel Theodore Roosevelt and his Rough Riders raised the American flag atop San Juan Hill on July 1, 1898, following the famous battle there during the Spanish-American War.

• Robert Peary placed an American flag sewn by his wife at the North Pole in 1909.

• Five US Marines and a US Navy corpsman raised the flag atop Mount Suribachi on February 23, 1945, during the Battle of Iwo Jima. Photographer Joe Rosenthal captured the moment on film, creating one of the most iconic photos in history.

• In July 1960, the United States adopted the current 50-star flag. It’s the longest-running design so far. A 16-year-old Lancaster (Ohio) High School student named Robert G. Heft came up with the design in 1958 as part of a class project after Alaska and Hawaii were made states.

His design earned him a B-minus but was selected by then-President Dwight D. Eisenhower as the new American flag. The teacher upgraded Heft’s grade to an A upon the president’s selection.

• Mountaineer Barry Bishop placed the American flag on the peak of Mountain Everest in 1963.

• In 1969, the American flag became a fixture on the moon after Neil Armstrong placed one there July 20. Five additional flags were put there by astronauts in subsequent Apollo moon landings.