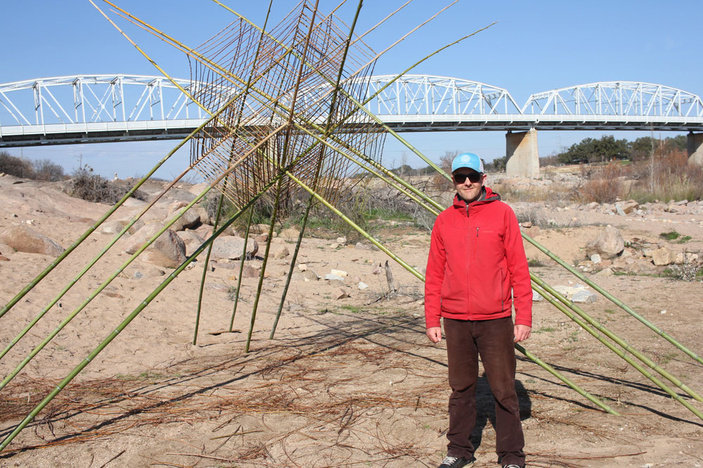 Richard Shilling of England joins foraged twigs to one of several large structures he lashed together in Grenwelge Park in Llano. Shilling came more than a month early to prepare for annual Llano Earth Art Fest, which is March 13-16. Staff photo by Alex Copeland

More than a month before the annual Llano Earth Art Fest begins March 13, earth artist Richard Shilling of England shoveled a large mound of soil near the entrance to Grenwelge Park, where the festival has been held for the past four years.

A recognized name in the tight-knit earth arts community, Shilling came early to gather the raw materials for this year’s entrance piece, which will be created by local earth artist Joaquin Cortez. Built from nearby elements of nature, the piece will greet visitors to the four-day event, which runs through March 16.

“We’re really itching to get on and start making some bigger stuff,” Shilling said of his pre-festival visit.

Now in its fifth year, the Llano Earth Art Fest draws an international audience and competitors to the world rock stacking and rock skipping championships. Visitors can watch or participate in any of several family-friendly activities, including a climbing wall and face painting. Live music and unique performance artists entertain.

While evidence of past festivals can be seen throughout Grenwelge Park, nothing remains unaltered. Rain washes away sand and stone. Fruitless trees from years past are bearing this year. Reeds tower in places they were once absent.

Land art by its very nature is ephemeral, he said. Projects evolve as they’re exposed to the elements over time. Some last, while others wash away completely. Made from natural earth elements, they are meant to be fleeting.

Shilling’s art is especially transitory. He uses leaves woven or stitched together into delicate geometric shapes. Twigs bound with cords made from strips of willow bark help create abstract but human shapes from the organic chaos of nature.

Shilling started creating earth art as a hobby. He was a computer programmer for 20 years. He posted his art on Flickr and social media, which led him to other earth artists.

“You’d say, ‘Oh, there’s someone on the other side of the world stacking rocks. I want to have a go at that,’” he said.

He began attending festivals, finally meeting face to face the people he had become friends with online.

“Suddenly, it’s like, you’re all here together,” he said. “There are a number of land art festivals around the world. It’s very much not a traditional thing. It’s that collection of people. It’s a spontaneous movement.”

Shilling values the freedom that LEAF gives him. It feeds into the creative process of entering an environment and letting what he finds inspire his work.

“The purest form of it is exactly that,” he said. “You come somewhere, and you just let what you find and how you feel inspire what you do.”

The rocky southern bank of the Llano River, with its stones, sand, and wild greenery, provides plenty of nature to inspire his freeform experimentation with the environment.

“We go to other festivals, and, it’s like, you’re given a legal document like that,” Shilling said. “They work you to the bone. It’s like more of an organized festival thing but much less nice for the artists. You come here, and, it’s like, ‘What is it you need?’ They set it all up so you can go and play, and it comes out in what you create because it’s such a nurturing atmosphere.”

As part of its more open philosophy, LEAF welcomes amateurs and professionals alike to stack stones, play in the mud, and get dirty.

“It’s a growing thing, and I think it’s possibly a needed thing, even whatever little impact we have with climate change, or what have you,” Schilling said. “We’re getting people out in nature.”