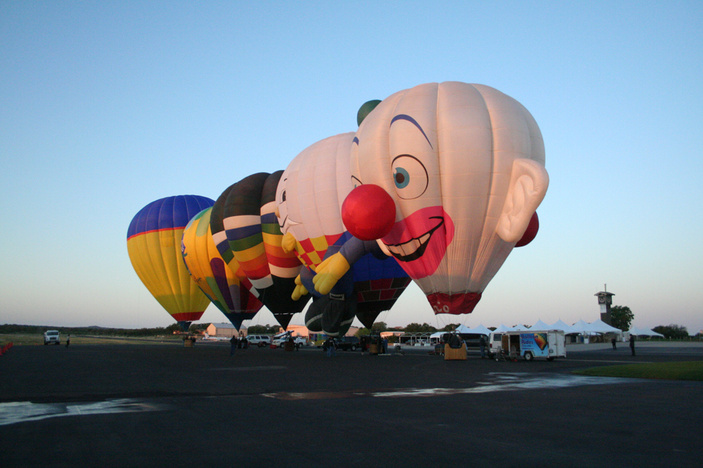 HORSESHOE BAY — Hot-air ballooning appears simple. Just fill up the balloon, climb in the basket, and lift off. Simple it may be, but one thing you’ll never hear balloon pilot John Cavin say about his favorite activity is that it’s boring. Cavin has almost 40 years’ experience to prove that one day is never like another in the air.

“No two flights are the same,” he said from his home base in Florida. “Each flight is different. Unlike in an airplane, where you get in, take off, head to the next airport, and land, when you take off in a balloon, the winds are different each time, the speed is different, and the landing sites are different.

“It all keeps it interesting,” Cavin added.

Cavin is returning to the Highland Lakes for Balloons Over Horseshoe Bay Resort on Saturday, March 31, at 26801 Texas 71. The festival features a morning session from 6:30-10:30 a.m. with a balloon ascension at daylight (about 7:30 a.m.). Once the balloons take off, the activities begin, including a rock-climbing wall, a bungee trampoline, the Safari Greg Animal Show, an Easter egg drop, and helicopter rides (additional fee). The festival grounds close at 10 a.m. and reopen at 4 p.m. for the evening session.

While the multi-colored hot-air balloons are the main attraction, Horseshoe Bay Resort packs in quite of bit of other fun, food, and live music as well. There’s a craft fair, games and activities, food trucks, and more. There’s even a magic and comedy show featuring Gus Davis at 4:15 p.m.

A big draw for the evening session is the 2018 Balloon Glow Finale at 8 p.m. Crews fill their balloons, which are tethered to the ground, and at 8 p.m. “light” them up with a flame that heats the air and makes it fly. The balloons glow against a backdrop of the setting sun, offering one of the most spectacular photo ops around.

Cavin, who flies in 23 or 24 balloon festivals a year, especially looks forward to the Horseshoe Bay event for a number of reasons. One is that the weather is so good — and predictable — the balloonists almost always get to fly their craft. Other festivals with less predictable weather can force crews and pilots to hunker down in their hotel rooms with no hope of air time.

“I think every year at Horseshoe Bay, we’ve been able to take off,” Cavin said. “Plus, I just like the people. Bryan (Woodward) at the resort, he takes really good care of us and treats us like family. The crowd there shows up and is really appreciative.

Cavin has amassed a veritable air force of eight hot-air balloons shaped like different characters. The two he’s bringing to Horseshoe Bay includes one of his originals, The Purple People Eater. His Rocket the Flying Squirrel balloon will have its world debut.

This hot-air enthusiast didn’t grow up dreaming of being a balloon pilot. In fact, it was a driver who picked up Cavin, then a college student, as he was hitchhiking 55 years ago that eventually landed him in a balloon basket. Over the years, he and that driver, Charlie Edwards, became close friends. When Cavin raced cars for 10 years, Edwards served as Cavin’s mechanic and crew chief.

At some point, Edwards left Atlanta for Florida and invited Cavin to join him. Edwards had already picked up ballooning and introduced Cavin to it.

“It happened slowly,” Cavin said of becoming a balloon pilot.

At first, Cavin flew because he enjoyed the sport of balloon racing and hanging out with the other pilots. Then, he played golf with a man from G.H. Bass Shoes. Cavin quipped on the third hole that what the shoe company needed was a balloon.

Several months later, Cavin found himself piloting a balloon with the company’s logo. He began taking the balloon across the country, including to balloon festivals.

“It kind of grew from there,” he said.

In 1996, Cavin bought his first specially shaped balloon, which he named The Flying Purple People Eater. Over the years, he’s added several more, including Spunky the Skunk, Yellow Bird, and Puddy Cat.

Ballooning takes him across the United States and to Canada for festivals and events with a possible stop in Taiwan this year. Many of the festivals, such as Albuquerque International Balloon Fiesta, are regular stops for Cavin.

Over the years, he’s made quite a few friends through ballooning. In 1985, he participated in the International Balloon Festival of Saint-Jean-Sur-Richelieu in Quebec, Canada. It was, and is, an incredible festival with huge hayfields some 2 miles wide and 2 miles long, making it perfect for balloon festivals. But it wasn’t just the great setup and flying that made the event memorable — and one he returns to whenever he can — it was the people.

“I still have friends that I see when I go back there,” Cavin said. “I do love my life.”

Ballooning creates those types of lasting bonds. Festivals such as Balloons Over Horseshoe Bay Resort not only create friendships for the participants but memories as well for the families and people who attend. It’s that simple.

You can also schedule balloon rides and helicopter rides at additional costs.

There is a $10 parking fee, which is good for morning and evening sessions.

Go to balloonsoverhsbresort.com for more information or to purchase tickets. Go to cartoonhotairballoons.com to learn more about Cavin.