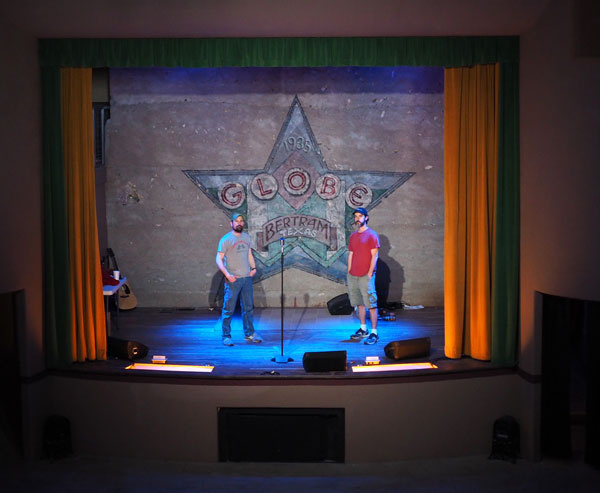 Zach Hamilton (left) first saw Bertram’s Globe Theatre in 1999 and wondered about its potential. In 2006, he showed it to his friend Lance Regier and mentioned, ‘Wouldn’t it be great to fix that up?’ It would take a little longer for Regier to agree, but now the duo have renovated the historic theater and are celebrating its grand opening Feb. 27 with a concert featuring Dale Watson. Go to globetheatretx.com for more information. Staff photo by Daniel Clifton

BERTRAM — When they bought the Globe Theatre in 2009, Zach Hamilton and Lance Reiger figured they could put a little more than a year’s work into the venue and then open the doors.

“Yeah, that was 6½ years ago,” Hamilton said with a laugh. “I think if we had known it would take this long, I don’t think we would have done it. But now, I’m glad we did.”

On Feb. 27, Hamilton and Regier will throw open the doors and celebrate the grand opening of the newly renovated Globe Theatre. And they’ll do it in style as Texas musician Dale Watson takes the stage. It’s an exciting time, the two admitted. They have ideas and plans — more concerts, classic and independent films, community events and a platinum singer-songwriter series — just to get things rolling.

Getting it to this point, however, has been a longer journey than either predicted. The theater had been a mainstay of Bertram since it originally opened in 1935. At the time, Bertam was a bustling little community with cotton driving the economy. The Globe was a single-screen theater that offered entertainment as well as a place in later years at which parents dropped off their kids while they went shopping. People from the area shared a number of stories about the theater. (The balcony was for blacks and Hispanics during the height of segregation but eventually became the “make-out” area.)

But the two friends, who went to school in Liberty Hill and Florence, didn’t know anything about the Globe. And since it shut down several decades ago, it wasn’t really known off Bertram’s Vaughan Street.

“I remember getting my driver’s license and coming out this way, but we never got off (Texas) 29,” Hamilton said. “I didn’t know this was even here.”

In 1999, Hamilton happened to get off the main road and onto Vaughan. That’s when he first saw the dilapidated Globe. He thought, “Wouldn’t that be great to fix up?” But it was just an idea, nothing concrete. Still, the old building and the idea lived somewhere in his brain, and in 2006 while passing through Bertram, this time with Regier, Hamilton again pulled off onto Vaughan. He showed the Globe to Regier and said, “We should buy that and fix it up.”

“I was like, ‘Yeah, that’s a great idea,’” he added, noting his response was tinged with a bit of sarcasm.

A year or so later, however, while the two were skiing in Ruidoso, New Mexico, with some other friends, the Globe came up again. This time, it was Regier, who admitted maybe the beer had something to do with it, who looked at Hamilton and said they should buy the old theater, fix it up and open it for business..

“We had two big things going for us at the time,” Hamilton said. “We were single, and we didn’t have kids.”

The building was in disrepair, but it would take almost a year or more of talks with the then-owner before they could purchase it. There had been offers from people who wanted to tear it down, and the city was also putting pressure on the previous owner in its bid to condemn the structure. But when the man learned Hamilton and Regier planned to renovate and re-open it as a theater, he had one more question, “Can I run the projector?”

The two men quickly discovered that the more they got into the process of fixing up the theater, the more work it required. Regier, who is an engineer, said all they really had to work with was the original four walls.

Some would have walked away from the overwhelming project, but Regier and Hamilton saw this as an opportunity to restore a bit of history. They didn’t want to create a modern building from the old one but bring back the magic and heart of the Globe Theatre.

So they began the restoration process. With most, if not all, of the original Globe Theatre’s furnishings and fixtures destroyed or in terrible shape (rain had run down through the collapsed roof and flooded a large portion of the theater on and off for years), Regier and Hamilton began looking for period pieces to return it to its glory days.

They rebuilt the stage to original specifications with an old wooden floor from a Sears store built in the 1930s in San Angelo. Whenever they heard of an old building, theater or structure being torn down — whether in San Angelo or as far away as Chicago — Regier and Hamilton checked on it for anything that would work in the Globe.

They even repainted the walls in the same graphics and colors decorating the Globe when it opened in 1935.

“The hardest thing was probably the seats,” Hamilton said. “We wanted seats that were from that era.”

They found them in Jackson, Tennessee, at a company that reclaims and revitalizes old theater and similar seating.

Along with pouring their own effort and money (they did raise funds for the seating through a Kickstarter campaign), the city of Bertram’s Economic Development Corp. helped with a grant to clean up the facade facing Vaughan Street.

“The city has been great to work with,” Hamilton said. “They helped with the front and with getting us hooked up with three-phase electric.”

But something was missing.

“The (previous) owner told us he knew where it was,” Regier said. “It turns out it was in a relative’s goat barn. That was an interesting find. We had it cleaned up and had the neon fixed and hung it.”

As true as they stayed to the original look of the Globe, Hamilton and Regier admitted they did take a few liberties during renovations — such as adding air conditioning, heat and indoor bathrooms. They also added an extension to the back of the structure for dressing rooms and the such.

Though the grand opening is Feb. 27, the two held a couple of events in the fall and winter of last year. The first was right after Thanksgiving. They had just knocked out the roof before replacing it and hosted a “night under the stars” with Lucas Hudgins.

“It was pretty cool,” Hamilton said. “People just pulled up, and we had a concert under the stars.”

Things have changed in Hamilton’s and Regier’s lives. Both are married; Regier has two children and Hamilton is expecting his first. So they felt they really had to push through and get the Globe Theatre done and open.

Along with music (they have three other performances booked), Hamilton and Regier want to show classic and independent films, hold a platinum singer-songwriter series (with performers who have sold a million songs), and put on community events and other activities.

Go to globetheatretx.com for tickets, upcoming events or more information.

SO eager to visit... very impressed with the all the work and sacrifice that's been put into this endeavor!