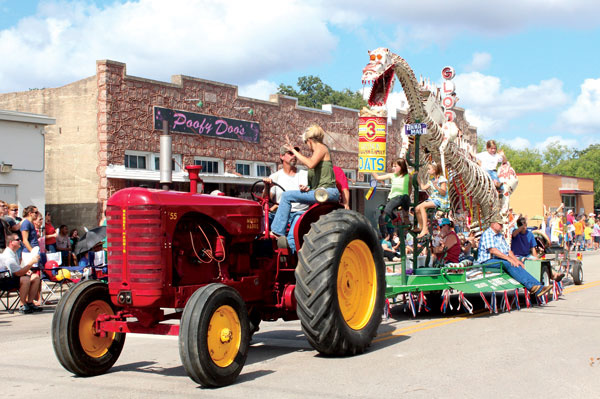 You never know what you’re going to see rolling down the grand parade at the annual Oatmeal Festival in Bertram and the community of Oatmeal. This year’s event is Sept. 4-5 with the parade at 10:33 a.m. Saturday. See a schedule of events below. File photo

BERTRAM — When the annual Oatmeal Festival rolls around Sept. 4-5 in Bertram and Oatmeal, you might think, “Oh, just another festival. And one that celebrates oatmeal, a breakfast food.”

But before you scoff at the idea, reconsider the celebration of this humble meal because this little grain and its offshoots have changed the world.

Oats and oatmeal helped break the Roman Empire and gave us the Tour de France. And you thought it was something you just heated up for breakfast.

Oats date to around the time of the first century, though the wild plants that formed the basis of the crop date back even further. But it’s about 1 AD that we see oats planted on purpose as a food source for both humans and livestock.

Now, that’s not earth-shattering by any means. After all, humans have cultivated plenty of grains and crops, even lima beans.

Oats offered advantages over other grains in that they could adapt and grow in cooler climates. Now, stick with me here because this is how oats played a role in toppling the Roman Empire. The Romans, if you didn’t know, once built a massive empire that stretched across Europe and Central Asia. They enjoyed wine and good food, but they scoffed at oats and anybody who ate them. To Romans, oats were something that you fed to livestock.

Well, up in Northern Europe, the Germanic tribes and Celts not only grew oats but ate them. They particularly enjoyed a simple oat cake. The Celts would celebrate a day of raiding and rampaging with oat cakes.

Let the Romans scoff at them because the Germanic tribes (sometimes referred to as “barbarians” by the Romans) managed to do something many others couldn’t: Overthrow the Roman Empire, even raiding Rome. And along with their equipment and swords, it’s a good bet the Germanic tribes brought many bags of oats to feast on along the way.

Of course, at that time, there were no marketing agencies to help craft a new message for the humble oats — “Eat oats and conquer an empire,” or something along those lines. But as Northern Europeans began exploring and spreading out, they often took oats with them.

While oats, often in the form of oat cakes, remained a dietary staple, the term “oatmeal” didn’t come along until the 1400s to describe flour made from oats.

About 1600, Scottish settlers on the Elizabeth Islands off Massachusetts planted oats (along with other grains, of course.) It’s the earliest known time oats were cultivated in the new country. Eventually, other groups, including the Dutch, began cultivating oats.

Oats took off in the colonies and later the United States. Even George Washington planted about 580 acres of oats.

How’s that for a recommendation? “Oats, good enough for the president. Why not you?”

In April 1815, Mount Tambora in Indonesia erupted. It didn’t just burp; it blew it’s top. Before the explosion, the mountain stood an estimated 12,000 feet tall but lost about a third of that height. All that dirt, dust and smoke, along with everything spewing from the volcano, had to go somewhere.

So it went into the atmosphere.

By 1816, the dust and ash spread around the world, substantially reducing the amount of sunlight reaching the Earth. This triggered “The Year Without a Summer.” The cooler temperatures led to loss of crops, including oats. As economics dictate, less supply means higher costs. Oats, once a favorite food stuff for livestock, became too expensive for that use. Many horses starved to death if they weren’t slaughtered for food.

As the ash and dust eventually dispersed and the sunlight returned, things went back to normal — except there weren’t quite as many horses. This meant a loss of transportation.

A German man named Karl Drais took this lack of transportation as an opportunity to create a horse alternative called the velocipede, or draisine. Some people nicknamed the contraption the “dandy horse.” The two-wheel principle he used in the invention would eventually form the basis for the bicycle and the motorcycle.

All because of the humble oat and oatmeal.

Not only did this incredible grain give us the bicycle and Tour de France, one could argue it helped lead to the creation of the Harley-Davidson motorcycle as well.

Not bad for a little old breakfast cereal.

So let’s celebrate this industrious grain and all it has given us Sept. 4-5 during the annual Oatmeal Festival. And don’t forget: “Oatmeal, it’s not just for breakfast; it’s a world-changer.”

The fun begins Friday in the community of Oatmeal (hence the genesis of the festival’s name) with an arts-and-crafts show, a barbecue supper and the announcement of the Miss Oatmeal Pageant and Mr. Groaty Oats.

Now, a cautionary note: The men competing for Mr. Groaty Oats get a lot of help from the wardrobes of their wives — so you know it’s going to be a lot of fun and a bunch of laughs.

The schedule starts at 5:03 p.m. in the Oatmeal community, located at FM 243 and CR 326 south of Bertram, with arts and crafts and a barbecue dinner. If the :03 or :33 start times sound strange, it’s a tribute to the 3-Minute Brand Oats, which was the company that stepped up in the early years to lend its support and name to the festival.

On Friday, you can round out the night with a little dancing to the tunes of Eddie Shell and the Not Guilties. The festival picks up again Saturday in downtown Bertram (with the exception of the trail ride, which starts in Oatmeal at 8:03 a.m. and makes its way to Bertram.)

Go to oatmealfestival.org for more information.