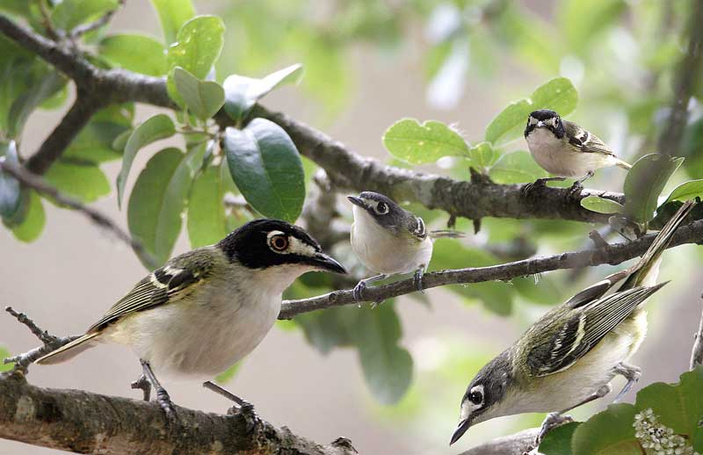 MARBLE FALLS — Protectors of the black-capped vireo, which nests in the Balcones Canyonlands National Wildlife Refuge, are singing a happy tune as conservation efforts have led to a recovery of the once-dwindling bird and a proposal to remove it from the Endangered Species List.

In the 1980s, the future was bleak for the black-capped vireo, a songbird that only breeds in Texas, Oklahoma, and northernmost Mexico. Only about 350 birds were known to survive in a few locations. The bird was listed under the Endangered Species Act (ESA) in 1987.

Following that listing, the U.S. Fish and Wildlife Service began working with officials in Texas and Oklahoma, the U.S. Army, private landowners, and non-governmental organizations to protect and recover the vireo. Because of those efforts, there are now more than 5,200 known birds and more than 14,000 estimated across their breeding range.

And with this news, the service on Dec. 14 proposed to delist the black-capped vireo from the ESA.

“The commitment and follow-through from Fort Hood, Fort Sill, Texas Parks and Wildlife Department, Oklahoma Department of Wildlife Conservation, private landowners, and others over the last 30 years have been critical in bringing the vireo back from the brink of extinction,” said Dr. Benjamin N. Tuggle, the service’s southwest regional director. “(Wednesday’s) announcement illustrates exactly how the ESA works to protect species on the brink of extinction and to successfully recover them.”

The decline of the black-capped vireo was primarily because of the impacts of habitat loss and nest parasitism by brown-headed cowbirds, which dupe the vireos into raising cowbird chicks at the cost of the survival of the vireos’ own young. Across the species’ range in the United States, the U.S. Fish and Wildlife Service is addressing and reducing the threats to the vireo through the use of prescribed fire, conservation easements, and management of brown-headed cowbirds. The U.S. Army manages significant populations of the species in Texas and Oklahoma, where it has protected important vireo habitat and breeding grounds and managed primary threats.

Texas and Oklahoma have provided funding for research and recovery and successfully managed vireo populations on state lands. Private landowners are participating in state cowbird control programs and managing lands to promote native habitats. The U.S. Department of Agriculture’s Natural Resources Conservation Service and conservation groups such as The Nature Conservancy and the Environmental Defense Fund have also contributed to the recovery of the vireo by promoting private land management, reducing threats on private lands, and protecting habitat through easements and acquisition.

The black-capped vireo is the smallest member of the vireo family occurring regularly in the United States. It sports the namesake black cap and a white face mask. The bird winters exclusively in Mexico along the Pacific Coast but mates and nests in Texas and Oklahoma. Black-capped vireos build intricate hanging-cup nests two to four feet above the ground that are fastened to the branches of shrubs with strands from spider webs. The birds return to the same breeding site year after year.

In June 2007, the U.S. Fish and Wildlife Service completed a five-year status review of the species, which recommended it be downlisted on the ESA. The service received a petition in 2012 to downlist the bird, and in September 2013, it published a 90-day finding that the petition presented substantial information that downlisting might be warranted.

According to the service, analysis of its findings and research showed that the primary known threats to the black-capped vireo — habitat loss and brown-headed cowbird parasitism — have been reduced or adequately managed, and populations of the bird are expected to be viable in the future, which would mean the vireo no longer meets the definition of a threatened or endangered species under the ESA.

If the vireo is delisted, the service would continue to monitor its status for a minimum of five years after delisting. A post-delisting monitoring plan will describe monitoring methods, reporting procedures, and agency responsibilities, and be published in draft form for public comment prior to the final delisting rule.

The service is requesting comments or information from the public, other concerned governmental agencies, the scientific community, industry, or any other interested parties concerning the delisting proposal. Comments must be received within 60 days, on or before Feb. 13, 2017.

Submit comments by one of the following methods:

• Go to the Federal eRulemaking Porta at regulations.gov. In the search box, enter “FWS-R2-ES-2016-0110,” which is the docket number for this rulemaking. Then, in the search panel on the left side of the screen, under the Document Type heading, click on the Proposed Rules link to locate this document. You may submit a comment by clicking on “Comment Now!”

For more information about the U.S. Fish and Wildlife Service, the black-capped vireo, or the Balcones Canyonlands National Wildlife Refuge, go to fws.gov.

From the U.S. Fish and Wildlife Service