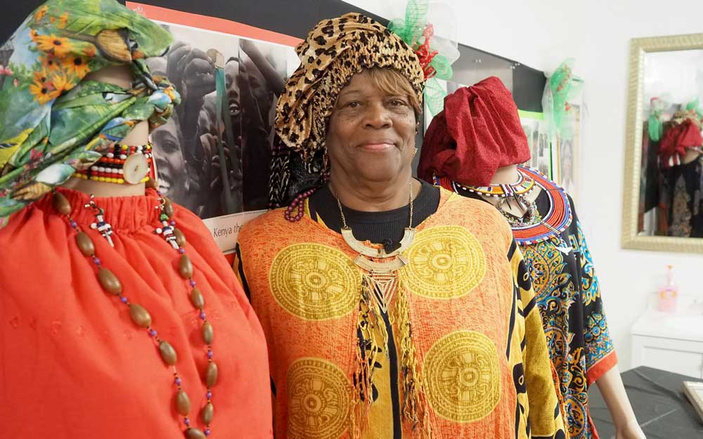 Bessie Jackson, a member of St. Frederick Baptist Church in Marble Falls, manages a Black History Month display at the church. Jackson wants to create a permanent local Black History museum at the church and is always on the lookout for more materials, information, and stories regarding African-Americans in Burnet County and the Highland Lakes. The display is open to the public during regular church hours. St. Frederick's, 301 Avenue N in Marble Falls, is also holding a Black History Month program from 11 a.m.-2 p.m. Saturday, Feb. 24. The public is invited. Staff photo by Daniel Clifton

MARBLE FALLS — Piecing together black history in the Highland Lakes is like trying to put together a 2,500-piece jigsaw puzzle with 2,234 pieces missing.

“When I left Dallas, history wasn’t something I was interested in, but after everything ... it’s become so important to me,” said Bessie Jackson, a member of St. Frederick Baptist Church. “There’s just a big piece of the Marble Falls history missing without (black history).”

Over the years, Jackson and others have pulled together as much about the African-American experience in the area as they could, but not much was ever written or kept regarding that history. Every little bit requires almost sleuth-like abilities. Following a trail or lead sometimes reveals part of the past, such as the photo someone shared with Jackson of Mary Bailey, a black woman who first started a small daycare for children in her home.

Bailey was met with a lot of opposition, Jackson said, for various reasons. However, what she started became part of Opportunities for Williamson and Burnet Counties, a private, nonprofit community action agency founded in 1965.

There isn’t much more than the photo and a scant amount of information about Bailey and her influence on the community.

Jackson has pulled together what she and others have collected for a black history display at St. Frederick Baptist Church, 301 Avenue N. It will be exhibited through the month of February, which is Black History Month. The public can view the display during church hours.

“One of the things I find with history is it doesn’t matter to you if it’s not a part of you,” Jackson said. “But history is a part of us all. It’s who we are and where we came from. We’re all one people, so we all have a shared history.”

On the walls of St. Frederick, Jackson has pinned up photos and stories of African-Americans living in Burnet County from the late 1800s up until recent days. There’s an old black-and-white photo of school children, circa early 1900s, dressed in nice clothes, the boys in suits and ties.

“We don’t know who they are,” Jackson lamented.

The school only offered classes through the seventh grade. Jackson said African-American students wanting to continue their education through high school had to go to Austin. The school district would pay for the students’ education at the Austin school, but the families were responsible for transportation or housing.

That’s how it remained until the Marble Falls school board voted in 1964 to end segregation.

There is little else known about George Washington Carver School.

It’s one of those many missing puzzle pieces.

Yet, that lack of knowledge about the past isn't stopping Jackson and others from writing an incredible story for the future. As part of the February celebration, St. Frederick is hosting a black history dinner from 11 a.m.-2 p.m. Saturday, Feb. 24, at the church. Admission is free, and the community is invited. Congregation members and volunteers will cook the community meal and celebrate both national and local African-American contributions to the Highland Lakes, the state of Texas, the United States, and the world.

Jackson has invited three Marble Falls High School graduates — Marquita Washington Pride, Bryan Smith, and Ann Foster Faulknor — to come back and share their experiences with the community. All three, Jackson said, faced several challenges growing up but overcame them and went on to attend college and craft amazing lives for themselves.

“I want Marble Falls to know that we’re not just ‘here,’” Jackson said, “but we’re accomplished people. We might not have a lot, but we do great things.

“Plus, our kids — all the kids at the high school and in the community — can do what they want to do if they’re willing to work at it,” she added. “You don’t always have someone standing there patting you on the back and encouraging you. Sometimes, you have to dig inside yourself, and you can do anything, and that’s what they can learn from these three.”

While tracking down those “missing pieces” isn’t easy, Jackson isn’t one to give up.