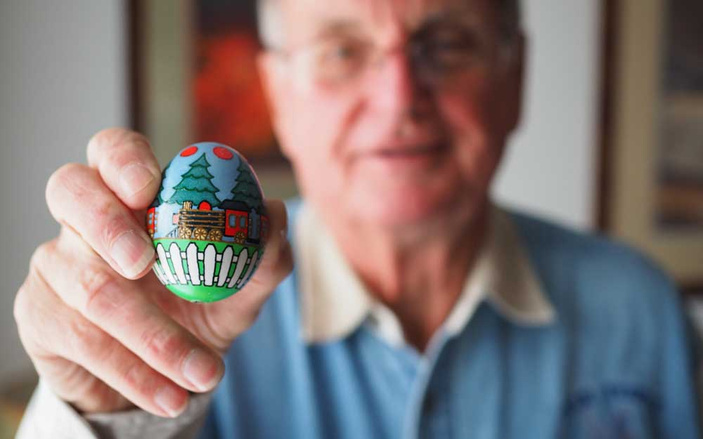 While it might look as if someone painted these intricate designs on this egg, it’s actually dye. Bob Dering, a Horseshoe Bay Winter Texan, creates batik-colored eggs, a process that consists of several steps of dyeing to transform simple, white eggs into works of art. Staff photos by Daniel Clifton

HORSESHOE BAY — The exchange wasn’t anything life-altering, but the store employee’s kindness and attention touched Bob Dering. So the next time Dering was in the shop, he gave the person an egg.

Yes, it was a store-bought egg out of a carton, but it was much more than that after Dering got his hands on it.

“I can do pretty much any color,” said Dering as he rolled another egg around in his fingers.

This egg danced in multi-colored splendor, looking more like a piece of stained-glass art than anything you’d ever want to scramble.

The process is called batik egg coloring, and Dering, a retired high school coach, is an expert at the artistic tradition.

“This craft started in Eastern Europe, maybe Russia or the Ukraine,” Dering said. “Originally, they would decorate eggs for … Easter with Christian symbols. It was called pysanky.”

Dering explained that some experts of the art would probably argue it’s only “pysanky” if the egg’s design features religious symbols.

“So I just call mine batik egg coloring,” he said with a grin.

No reason to get caught up in the debates.

“It looks like they’re painted, but it’s really dye,” Dering said of the colors and designs.

The design can be simple shapes laid out around the egg in various patterns, or buildings (he has a couple of First United Methodist Church of Marble Falls), or figures such as people and animals. Or, he can even combine them.

“It’s whatever’s in the craftperson’s head,” Dering said as he pointed to his noggin.

He started batik egg coloring about 15 years ago after Martha Stewart demonstrated it on her TV show. (Dering said it’s a bit embarrassing to admit he watched the show, but he pointed out he was retired and you never know from where you can learn something new.) The first few were terrible, but he continued, improving with each one.

For most of those years, he used a small, hand-turned lathe designed for batik egg coloring to pen on a design. It was a bit tedious. But recently, he came across a mechanical device called the EggBot, which does that step for him using a computer program. The program frees up Dering’s creativity. He simply scans a photo or a design into the computer program, which adapts it for the EggBot, which, in turn, draws it on an egg.

There ends the time-saving. Now it’s back to the dying, waxing, and washing.

Dering first dyes the entire egg one color. He picks the color from a detail of the design, even if it’s one petal on a tiny flower. Once the egg is out of the dye, he covers the part of the shell he wants to remain this particular color with wax to protect it.

Then, it’s off to the sink, where he washes the egg, removing dye from the rest of the shell.

Dering selects another color for a different aspect of the design and dunks it in that dye. Out it comes to dry a bit before he once again covers the part he wants to remain this color with wax.

And it’s off to the sink again.

The process continues until Dering has colored the egg how he wants it. It could be two or three times or a dozen; it just depends on the design.

After the egg is how he wants it, Dering removes the wax, revealing a shiny, colorful shell. He then uses a Dremel tool to cut a small hole in the base of the egg and removes the yolk and white. With a quick zap in the microwave and a coat of polyurethane, Dering has another egg to give away.

And that’s what he does with them.

“None of the eggs are for sale. I don’t sell them,” Dering said.

Instead, Dering gives them to people who might be quietly working behind the scenes, typically going unnoticed but doing a good job. He also presents them to people who are struggling with illness or a similar malady. Or, as in the case of the store employee, he gives one to a person who has just been nice to him or someone else.

“I don’t think we tell people enough that somebody knows they’re doing something nice or that someone knows they're going through tough times,” Dering said. “This is my way of doing that.”

It’s a simple gesture, even though the art is not. But most of the people receiving the eggs don’t know the effort that goes into each one.

That doesn’t matter to Dering.

“The response I get from someone I give an egg to for one of the reasons I mentioned, well, you should see them. It’s a response you can’t buy,” he said. “I have people who I gave an egg to a year or more ago — I can’t even tell you which egg — but they’ll come up to me and say, ‘I still have the egg, and it’s in this special spot.’

“It really is true that it’s better to give than to receive,” Dering added with a laugh.

Even if you’re just giving an “egg.”

Mr. Dering shouldn't be so modest, as this is an intricate and difficult process requiring planning, a strategy and much care. This is truly a case of mind over matter. Kudos!