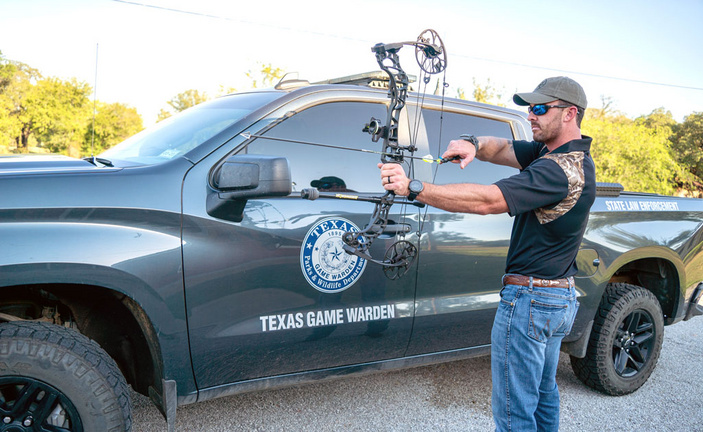 Llano County Game Warden Keegan Gould walked this reporter through the setup of his Mathews Vertix compound bow. Opening day of the white-tailed deer archery-only season is Saturday, Oct. 1, and Gould is gearing up to do his own hunting. Staff photo by Dakota Morrissiey

Saturday, Oct. 1 is marked on calendars across Texas as opening day of the 2022 archery-only season for white-tailed deer. Bowhunters will have 35 days — Oct. 1-Nov. 4 — to bag bucks and does before the woods are flooded with hunters during the general season.

The hills surrounding the Highland Lakes are home to the highest-density deer population in the Lone Star State, and hunters come from all over the country participate in the area's coveted hunting season.

I sat down with Llano County Game Warden Keegan Gould, a lifelong bowhunter and regular on the Animal Planet series "Lone Star Law."

Gould has been with the Texas Parks and Wildlife Department since 2016, worked as a hunting guide throughout high school and college, and was given his first bow in elementary school. He was raised in the Hill Country, around Wimberley, and I’ve heard stories of him riding around in a backpack at 2 months old during his father’s hunting trips.

The archery-only season not only offers an extra month of hunting, it puts you closer to an animal than a rifle, he said.

“It's hard to put into words, sometimes. You have a connection to nature and you get to be a part of it,” Gould told me. “Being close to an animal and the land will give you more satisfaction than shooting a 200-inch deer with a rifle any day.”

Knowing the country, your quarry, your gear, and the rules are all key components to having a successful hunt, according to Gould.

“One of the things that makes bowhunting in this area so unique is the abundance of opportunity,” Gould said.

Llano County is known as “The Deer Capital of Texas," and it has earned that title. There are on average 147 deer per 1,000 acres in the Hill Country, roughly three times more than any other region in the state. It's common to tell people to be careful on their way home because of the dozens of deer you're bound to pass on any given evening.

Gould noted that you could hunt for a week in other regions or states without coming across a single animal, let alone a deer.

Most of the land in Llano and Burnet counties is privately owned, meaning you’ll have to do a little research and find the right hunting lease or guide service for the best hunting opportunities. Gould recommended talking to locals and digging into the reputation of a hunting ranch or outfitter before spending your hard-earned money.

While this part of the state can be arid, it actually has an abundance of forage for deer, which is one reason for the immense population. Mesquite trees produce edible beans in the fall, oaks drop plenty of acorns, and autumn rains bring a new wave of shrubby growth, all of which are perfect forage for white-tailed deer. If you aren’t using a standard corn feeder, keep an eye out for oak groves, water sources, and game trails to put yourself in the right place for the coming archery season.

“People need to save their money on all the gimmick equipment out there,” Gould said.

While gear is important for a bowhunter, Gould said practice and honing your skills beat buying your way into being a better hunter.

Whether you’re shooting a traditional bow, compound bow, or crossbow, you’ll have to be pretty darn close to the animals you’re hunting, so you better be ready when presented with an opportunity. An ethical shot with a bow starts to max out around 50 yards, depending on your skill level, and it's even lower if you’re using a traditional bow. Rifle hunters routinely make shots at 200-400 yards, meaning they have a little more wiggle room when approaching game. Getting that close takes a lot of patience and practice, so invest your time in training rather than fancy equipment.

A bonus for Highland Lakes bowhunters is the abundance of deer. The more deer there are, the more opportunities you’ll have to harvest one.

Save your cash instead of buying the latest pattern of camo or a scent mask and hunt with the wind.

As a game warden, Gould is tasked with enforcing the hunting and fishing laws of the state of Texas. Knowing the rules and being safe in the field were at the top of his list for hunters.

Staying up to date on ever-changing TPWD game regulations is essential for a Texas hunter. The outdoor annual is the best source of information, and the Outdoor Annual App is a great way to have it on hand at any time.

Gould also recommended being aware of property lines, especially when bowhunting. An arrow might not kill an animal immediately, and they can easily run 100 yards, even with a well-placed shot. If a deer crosses onto property you don’t have permission to be on, you can’t retrieve it without the landowner’s permission. This becomes doubly important if you’re visiting an area you aren’t familiar with.

Bowhunting can be done a number of ways, but the most popular is out of a tree stand. Falling from a tree stand is one of the most common hunting injuries around, so be careful up there.

The Highland Lakes and surrounding Hill Country offer the best hunting opportunities in Texas, and archery-only season might be the top time to take advantage of them. Whether you’re a seasoned hunter, sharing archery with your family, or just starting out, there is something special about walking into the woods with a bow and arrow.

Gould seemed to hold bowhunting in high regard, and I tend to agree with him.

“A lot of bowhunters will tell you that the most important conversations they've had with God have been in a tree stand,” he said.

For more information on hunting regulations in Llano and Burnet counties, visit the Texas Parks and Wildlife Department website.

I love reading your articles Dakota. Keep it up. Miss you Buddy!