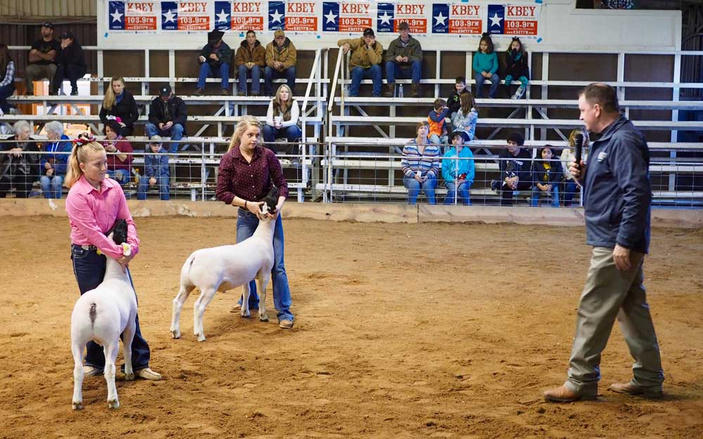 Burnet County youth show off their sheep during last year’s Burnet County Livestock Show. This year’s event is Jan. 5-7 at the Burnet County Fairgrounds, 1208 Houston Clinton Drive in Burnet. Go to burnetcountylivestockshow.com for more and a full schedule. Staff photo by Daniel Clifton

BURNET — When Brandon Evans' 9-year-old daughter, McKenzie, steps into the Burnet County Livestock Show arena this year, she’ll learn a lesson similar to the one he did as a fourth-grader in that same ring.

"Yeah, they're raising livestock, but shows like this are really about raising kids," said Evans, the chairman of the Burnet County Livestock Show.

Evans recalled the days he spent as a youth raising his animals, starting with chickens and working his way to rabbits, sheep and, eventually, cattle. He learned something new from each project, but the underlying lesson remained constant.

It’s the same thing his daughter as well hundreds of other youth will learn at this year’s Burnet County Livestock Show, which is Thursday-Saturday, Jan. 5-7, at the Burnet County Fairgrounds.

"They learn a tremendous work ethic and dedication," Evans said. "The kids have to take care of their animals, no matter the weather or anything else.

"There are days when they don't want to work with their animals or it's just too cold, but they do,” he added. “It's that type of dedication and work that they learn through livestock projects and the shows."

McKenzie is slated to show three calves, one sheep, and six goats this year. She does all the work, which goes beyond just feeding and watering the animals.

A youth must work with their projects daily to prevent the animals from showing fear and bolting inside the arena. Also, with animals such as rabbits, attention to detail is the key to success. Judges look for uniformity among the youth’s pen of show rabbits. They all must be similar in weight and measurements. Achieving this comes with proper feeding and regular weighings and then making adjustments along the way.

Even if a youth doesn't earn a top ribbon or Best of Show, Evans said that if they put in the effort and time, they can walk away knowing they did their best — an accomplishment in itself.

The Burnet County event kicks off the livestock show season for many of the area’s youth. During that season, several might head to the so-called “Texas Livestock Majors” — Houston, San Antonio, Fort Worth, and Austin — while others begin and end at the Burnet County show.

Either way, the local show is a big event for the county, drawing more than 200 kids and several hundred projects.

The show culminates at 1 p.m. Saturday with the premium sale. Unlike the majors, the Burnet County event isn't a terminal sale in which the animal goes to the highest bidder.

The kids get to keep their animals after the premium sale so they can take them to future shows — or even back home.

The premium sale, however, is a big boost to the kids.

"It gets expensive raising these animals," Evans said. "It costs about $200 a month to feed a steer or heifer, and even a bag of feed for pigs costs $20 or $30. And if you go through a bag every week or two, it adds up."

Often, buying committees of several people pool their money and then "purchase" animals as a group, offering much-needed funds to the youth.

"You can also show up and bid on and buy a project," Evans said.

Another way a person can help a youth is by adding on any dollar amount to a winning bid.

"Any kind of monetary donation, large or small, goes a long way in helping the kids," Evans said.

For those wanting to learn more about livestock shows, Evans said the best way is to come out and see one for themselves.

"Just come out and ask questions," he said. "Ask a kid, ask a parent, ask a volunteer. The kids and parents will tell you about their animal and what it means to them."

The Burnet County Fairgrounds are located at 1208 Houston Clinton Drive in Burnet behind the municipal airport. Go to burnetcountylivestockshow.com for more information and full schedule.