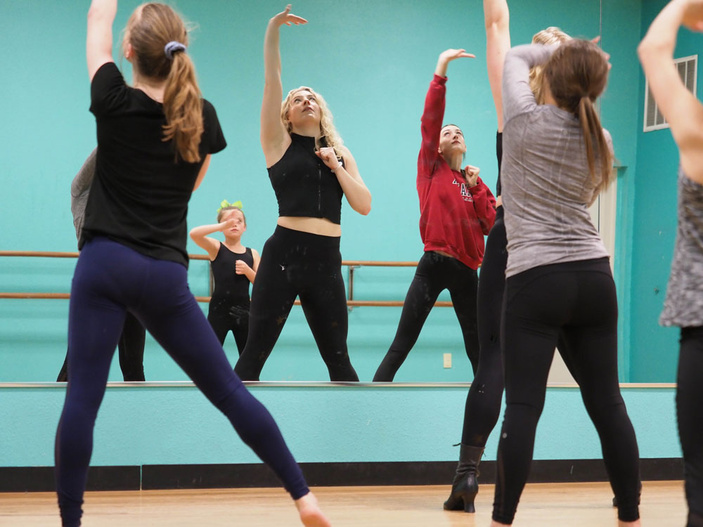 Ryan Winkler, a 2014 Burnet High School graduate, led a dance workshop Dec. 30 at Studio 29 Dance Centre in Burnet. Winkler graduated from Pace University’s commercial dance program in New York City in May 2018. The next leg of her professional dance career takes her to Hamburg, Germany, and a job with AIDA cruise lines. Staff photo by Daniel Clifton

Ryan Winkler stood in front of the group of dancers as living proof that being from a small town is not an obstacle to fulfilling big dreams — like studying dance in New York City.

“I think it was a manifestation,” Winkler said of her move from Burnet to the Big Apple four years ago to attend Pace University’s commercial dance program. “I have a mural of New York in my room, so I woke up to it every day. I saw it every day.”

Winkler returned to Studio 29 Dance Centre in Burnet where she began dancing in 2005, studying under Jenn Moore until she left for New York in 2014. She stopped by the studio to lead two dance workshops Dec. 30, but her greatest lesson might have been on how a person’s desire and hard work can lead to great opportunity, no matter where they start.

“Having Ryan come back to teach a class or do something like this, it does a lot,” said Moore, owner of Studio 29 Dance Centre. “It’s not just about what she shows them (on the dance floor). Ryan also shows them where they can go and what’s possible.”

Of course, it wasn’t easy.

“Ryan was not born with a dancer’s body, and she had real, everyday human struggles that got crazy hard,” Moore said. “She put in the work, a lot of hard work.”

But being from a small town was not going to be a roadblock for the young dancer.

“There’s this mystery, or mystique, about getting someplace bigger, like New York City. It’s like you can’t make it there if you’re from a small town,” Moore said. “That’s definitely self-imposed.”

The key, Moore said, is finding your passion and pursuing it.

“I always knew I wanted to be a dancer,” Winkler said. 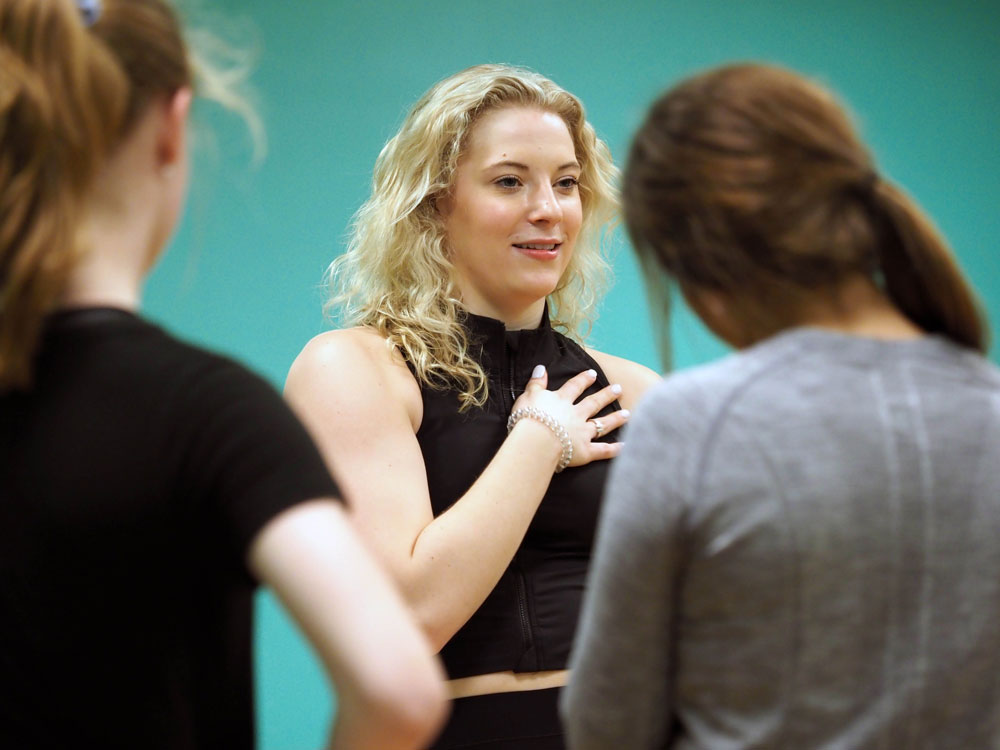 Ryan Winkler, a 2014 Burnet High School graduate, talks with younger dancers at Studio 29 Dance Centre in Burnet following a workshop. Winkler started dancing at the studio in 2005 under instructor and owner Jenn Moore. Winkler followed her professional dance path to Pace University in New York City and is now off to Hamburg, Germany. Staff photo by Daniel Clifton

She attended a dance workshop in New York when she was 15. After the workshop, she and her mother, Kim Winkler, spent a few more days in the city, which just cemented the idea that this was where she needed to go after high school. Between workshops in Texas and the trip to New York, Winkler learned about Pace University’s commercial dance program.

Learning to dance is one thing, but aspiring to be a professional dancer, attending school then establishing a career in New York is at a completely different level.

While Winkler’s friends moved on to other interests, she stuck with dance, even sacrificing other things she enjoyed.

Moving from Burnet to New York was a big change for Winkler, but she quickly fell in love with the city and the school. Pace University also demanded a lot from Winkler and the other dancers. While Winkler was one of the best dancers of her age from Central Texas, at Pace, she was among dancers who were the elite of their respective communities.

It was a bit humbling as the instructors didn’t always pick Winkler for a part.

Commercial dance students learn a wide variety of styles — ballet, jazz, anything to help them create a marketable skill set. The faculty also encouraged students to audition for parts in New York while attending school.

While she plans to build a career in New York, Winkler is in Hamburg, Germany, for the next few months, rehearsing eight hours just about every day in preparation for a four-month stint as a dancer for AIDA cruise lines.

“I knew if I wanted to do something like this, I had to do it now,” Winkler said about the cruise job. “I love to see new places, and, with AIDA, I’m going to be able see some incredible places.”

As for the stop in Burnet, Winkler loved sharing her experiences and knowledge with the younger dancers.

Moore sees the visit from Winkler as a chance for younger students to realize they can chase — and achieve — big dreams.

“Being from Burnet or a small town, it’s not something that can hold you back,” Moore said. “It’s about setting those goals and then working for them. One of the things that sets Ryan apart is she didn’t give up. Even when her friends gave up dancing, she didn’t. She knew this is what she wanted to do. I think that’s the key for dancing, or anything.”