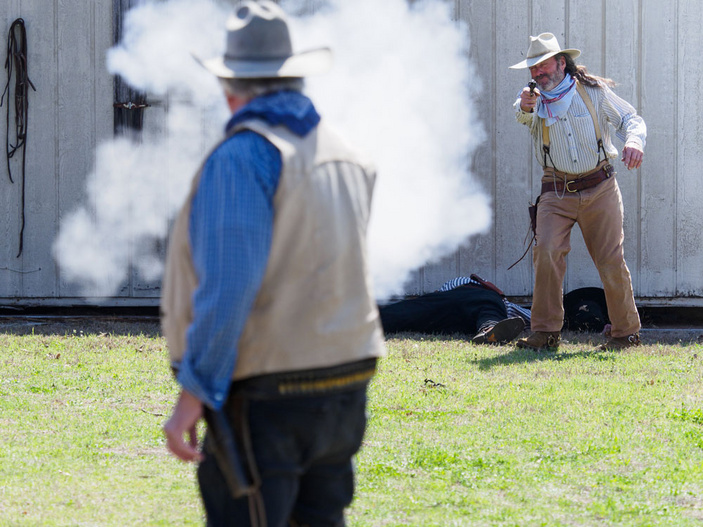 Sheriff 'Tex' Copsetta gets a shot off at Cactus Jack during a Burnet Gunfighters show Saturday, March 6. The gunfighters perform at about 12:30 p.m. Saturdays when the Hill Country Flyer train arrives, but everyone is welcome to attend. Staff photo by Daniel Clifton

When the Hill Country Flyer rumbles into Burnet on Saturdays, passengers will find the cagey outlaw Cactus Jack waiting for them. Fortunately, Sheriff “Tex” Copsetta is also nearby to round up that rascal before things get out of hand.

The two belong to the Burnet Gunfighters, a re-enactment group that holds Wild West shows at about 12:30 p.m Saturdays at the Old Town site, 408 E. League St. in Burnet. The site is located behind the Burnet Community Center and has an Old West bar, bank, and jail along with an area for spectators.

The Burnet Gunfighters have been around for almost 20 years, bringing a taste of the Western frontier to the modern Highland Lakes.

“Every gun we have is real,” Copsetta said. “We just load them with blanks, though we use blanks stronger than the ones you see in Hollywood movies.”

The Burnet Gunfighters put on a show, usually every time the Hill Country Flyer rolls into town from Cedar Park. But everyone is welcome to attend the Wild West shootouts filled with an entertaining cast of characters.

“We’re here to entertain the crowd and have fun," Copsetta said. "It’s a good, family-friendly show.” 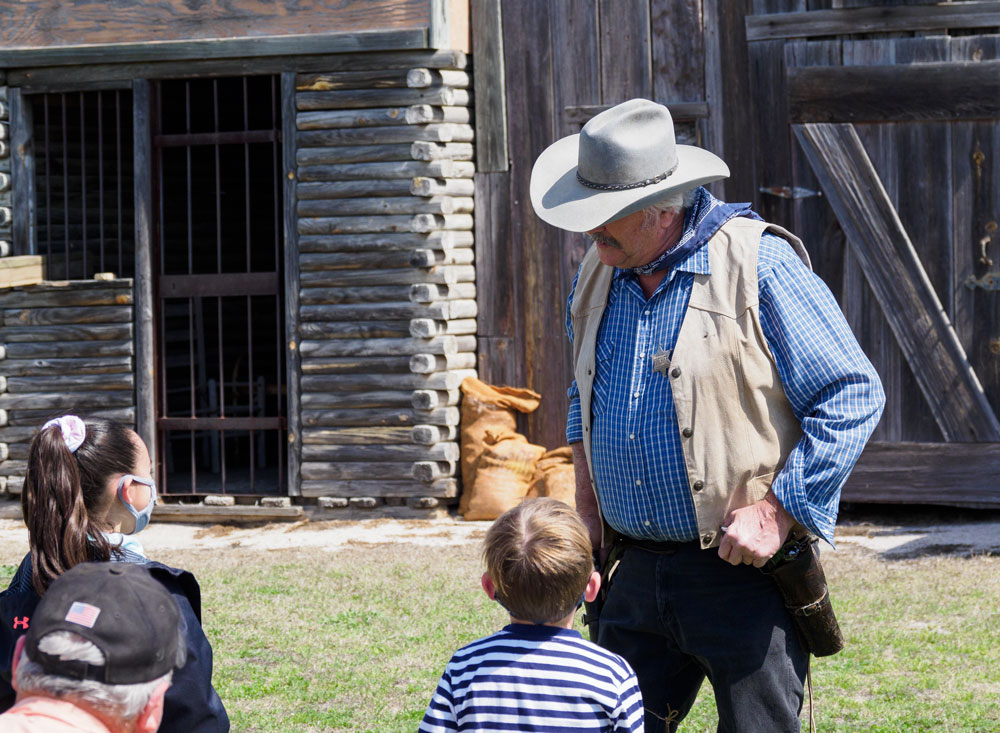 Sheriff 'Tex' Copsetta of the Burnet Gunfighters meets with some young deputies prior to a Wild West show at the group’s Old Town site, 408 E. League St. in Burnet. Staff photo by Daniel Clifton

Before the show begins, Copsetta seeks out a few “deputies,” gathering kids in the spectator area and going over gun safety. Copsetta explains to the kids that if they ever find a gun, they should report it to an adult and never pick it up.

He then asks the youngsters to raise their right hands and swears them in.

The Wild West shows might differ each Saturday, but you can almost always count on a bad guy going to jail and trying to escape, someone trying to rob the bank and the sheriff arriving just in time, and guns being drawn.

Shows are free, but donations are accepted. The Burnet Gunfighters donate any proceeds beyond their costs to a local charity.