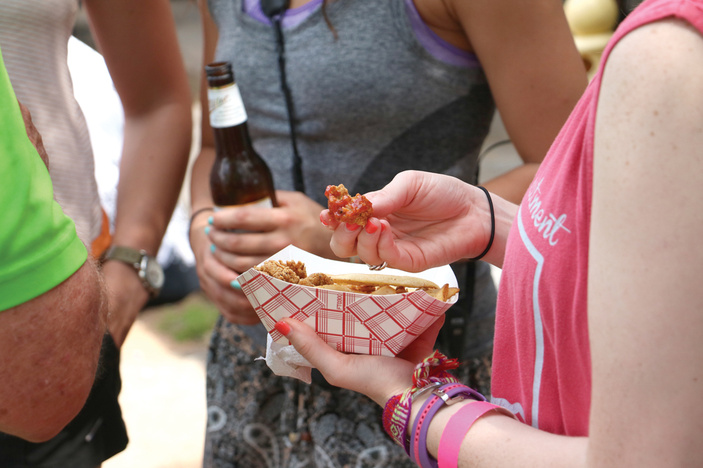 Castell General Store is throwing its annual Testicle Festival on May 19. Staff photo by Jared Fields

CASTELL — Tempt your culinary tastebuds on a delicacy you won’t find in many — if any — three- or four-star Michelin restaurants. It’s time for Castell General Store’s annual Testicle Festival.

The calf fries celebration is the brainchild of the general store’s Marc Leifeste. He held the inaugural festival several years ago, and the turnout even caught him by surprise.

Last year, he added some more fryers to keep up with the popularity of the event.

This year’s Testicle Festival is Saturday, May 19, at Castell General Store, 19522 RR 152. The music cranks up at 11 a.m. and rolls on until 8 p.m., so don’t fret if you’re looking for an excuse to check out Castell, but maybe not the calf fries.

Before the Castell crew starts serving calf fries at 2 p.m., you can enjoy some barbecue until then.

So, if you’ve read this far and are still scratching your head about a festival of testicles, let me pose this question to you: What do you think becomes of the “fries” after a rancher castrates young bulls to make them steers?

Those little huevos (also known as Rocky Mountain or prairie oysters) become the main dish at the Testicle Festival.

Well, not all end up in a fryer, but a bunch will Saturday.

It makes you wonder who was the first person to ask, “Why don’t we fry up some of these and eat them?” I imagine some of his friends raised their eyebrows at that. Adult beverages might have been involved.

As for the cooking, Leifeste and his crew have it down. Throw ’em in some seasoned flour, dunk them in the fryer, yank ’em out, and serve ‘em hot.

Along with the barbecue and calf fries, Tommy’s Mesquite Flamed Pizza Wagon will be there as will several other food vendors.

Plus, it’s Castell, where you can enjoy a beer and soak your toes in the Llano River. Give Castell General Store a call at (325) 247-4100 for more information.

And if you find yourself standing in a long line waiting on a helping of Rocky Mountain oysters, wondering if it’s worth it, ponder for a moment what those young bulls-turned-steers sacrificed.