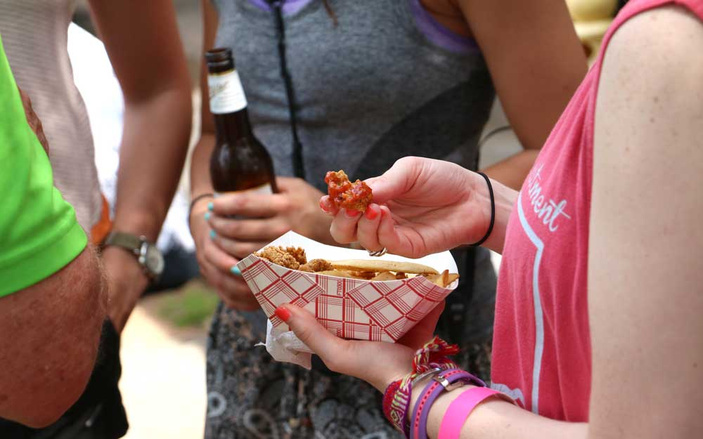 The annual Castell Testicle Festival is noon May 20 at the Castell General Store. Staff photo by Jared Fields

CASTELL — Marc Leifeste really didn’t know how the event would go when it started six years ago, but when about 300 people strolled though the Castell General Store last year for a helping of calf fries and turkey fries, he chalked it up to Castell itself.

“It’s like anything out here; it just grows,” he said.

This year, Leifeste and others are planning on as many as 400 people attending the Castell Testicle Festival on Saturday, May 20, from noon to whenever the fun ends. Leifeste has landed a few sponsors, which will help bring in three bands and add $1,000 to the winnings of the washer-pitching tournament.

Music and washers aside, the reason people are bullish about this festival is the main dishes they’re cooking up: calf fries and turkey fries as well as boudin balls, poppers, and french fries.

Just so everyone is on the same page, calf fries are the remnants of the animal husbandry practice of castrating young bulls. Are you still with us?

OK, so for those still scratching your heads, we’ll just be blunt: testicles. Livestock producers and ranchers typically castrate most, if not all, of their younger male cattle. There are a number of reasons for this: steers are typically easier to handle and not as aggressive as bulls; they can’t reproduce; and they often result in higher-quality and more consistent beef.

“Yeah, I don’t think anyone raises them just for (calf fries),” Leifeste said with a laugh.

As for the turkey fries, read the above passage regarding calf fries and put two and two together.

While the idea of eating calf or turkey fries might not rank high on your list of culinary delights, don’t turn your nose up just yet. In the 1903 sixth edition of “The Steward’s Handbook and Guide to Party Catering,” the author includes an entry on lamb fries. (Again, refer to above passage.) The writer states, “May be broiled, fricasseed, and stewed in wine sauce, but are generally fried.” Further down the paragraph, it states, “May be served on a bed of mashed potatoes, or with peas.”

There you have it: Calf and turkey fries are historically embedded in American gastronomy.

Now, during the Castell Testicle Festival, the calf fries most likely will go with a fine bottle (or can) of cold beer (though wine is still accepted) but probably not be stewed in wine sauce.

You can dig into a plate of calf fries and other delicacies for $5.

If you’re still uncertain about the dish, just go and enjoy the day in Castell on the Llano River.

Leifeste’s family settled in Castell in 1852. Marc and his family live on the family ranch just across the Llano River from downtown Castell. While he didn’t grow up on the ranch, he remembered coming out to the community as a kid and running into the Castell post office with his granddad.

The community thrived from the 1850s up until the Great Depression. Marc pointed out that the community once had a doctor and a number of businesses, and the Castell General Store was once a blacksmith shop before becoming a service station.

The Great Depression, however, shuttered most of the shops, and many of the residents headed to other places for work. While some folks hung on in the area, Castell itself tried to slip into the past.

About 12 years ago, his father, Randy Leifeste, moved back to Castell and opened the general store (but down the road a bit). The store was as much as something to do, but it helped rekindle Castell.

“When he moved to Castell, it was a ghost town,” Marc said.

Since then, most of the homes that had fallen into disrepair have been renovated, and many are now thriving bed-and-breakfasts (which are all booked for the Testicle Festival weekend). Though Castell proper has less than 10 full-time residents, Marc said it draws quite a few visitors on weekends. He sees this firsthand as people stroll through the Castell General Store’s front door for supplies or just something to eat.

A lot of times, it’s for something to eat. When he’s not cooking up calf fries and such one Saturday a year, Marc serves a great line of rotating dishes from steaks to brisket (with burgers, fried chicken, and ribs in between). One Sunday in late April, he ended up serving 75 ribeye steaks (a pretty high number for Castell) and last Saturday, a group of 40 San Angelo motorcyclists rolled in to the Llano River burg just for some Castell General Store barbecue.

“They came in for that, and then headed back. That’s it,” Marc said. “It was a great day for riding, but they came all the way from San Angelo to Castell.”

So even if you don’t want to try the calf fries, there are plenty of other reasons to make the trip to Castell, even if it’s to dip your toes or a line in the Llano River.

As for the Castell Testicle Festival (which started when Marc and friends were tossing around ideas for an event and a local rancher piped up that he had all these extra calf testicles), the music starts at noon, while the washer-pitching contest begins at 2 p.m. They start serving calf fries at 3 p.m.

“We were just trying to come up with something different,” Marc said about the festival’s origin.

They certainly did, and that’s no bull. (Sorry. We couldn’t resist.)

Future Picayune emails should have warnings in the header that they may contain photos of 'calf fries'. Reader beware!

Oh my gosh! Daniel, you are still making me laugh!! This was so funny, yet, I have to tell you, being raised on a farm in Northwest Missouri, I have had my share of calf fries, turkey fries and hog fries! They are DELICIOUS battered and deep fried! I'm sure these will be no exception! Keep those stories coming! You still "got it"! I love to read your articles!