Choccolatte's in Marble Falls: The Treat Shop That Treats You Like a Friend 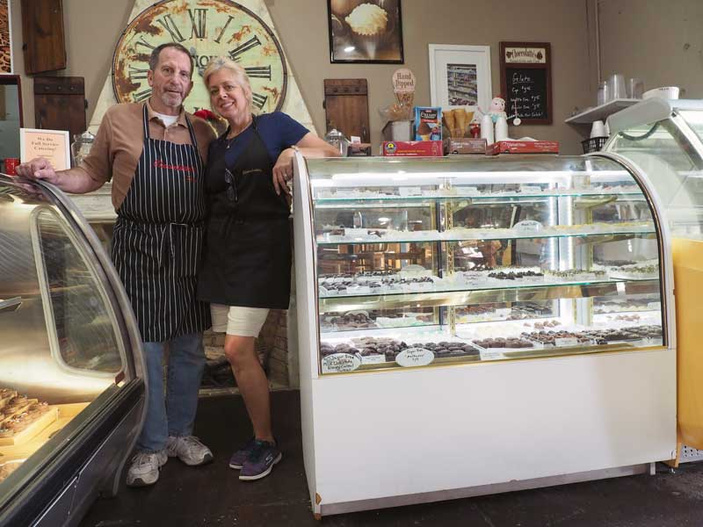 Steve and Michele Parsons treat everyone who walks through the door of Choccolatte’s as a friend. It’s one reason people keep coming back — that and the amazing chocolates, candies, coffees, and gelato. Plus, don’t forget the pecan English toffee. The shop is located at 807 Third St. in Marble Falls. Staff photo by Daniel Clifton

Choccolatte's in Marble Falls: The Treat Shop That Treats You Like a Friend

MARBLE FALLS — One could say it was a milk chocolate and caramel truffle that helped create the partnership and magic behind one of the Highland Lakes's “must-stop-in” places, Choccolatte's.

Steve and Michele Parsons leaned in a bit and held hands as she explained how it happened.

“He had the store upstairs,” she said, referring to Steve’s initial 100-square-foot chocolate shop on the second floor of GG Ganache, where she worked, which was then located at Main Street and Third Street in Marble Falls. “He made these incredible milk chocolate caramel truffles. And I’d go up there and get one, and we’d visit and I’d get to know him, and I’d go up and get another one, and we’d get to know each other better.”

“And we fell in love,” Steve added.

It’s a fairytale ending, but this is really about the fine chocolate, pecan English toffee, gelato, and other wonderful things you’ll find at Choccolatte’s, now located in a much more spacious spot at 807 Third St. — but still part of Old Oak Square.

If you’re looking for a delectable dessert garnish, try their pecan English toffee topping. You can also get it in full toffee style.

Steve started making his tasty creations in his home kitchen in 2009. He'd shuffle them over to the 100-square-foot spot he leased on the second floor of GG Ganache, which he opened the weekend after Thanksgiving that same year. Three years later, he moved downstairs to a 300-square-foot space before eventually building out the 4,000-square-foot spot from which he and Michele now work.

At Choccolatte’s, you’ll discover a world of chocolate and other indulgences. Steve makes everything from the pecan English toffee (which has a tremendous following) to the gelato from scratch and the best ingredients.

The Parsons focus on creating the highest-quality product, but, they pointed out, a good product can only get you so far in this world. You have to offer something else.

“I picture this place kind of like the show ‘Cheers’,” said Steve, referring to the bar-based sitcom where “everyone knows your name.” “That’s what we want to be. We want to know everyone’s name.”

It’s this focus on friendly customer service and just simply caring for others that quickly gives people a good feeling when they walk into Choccolatte’s. 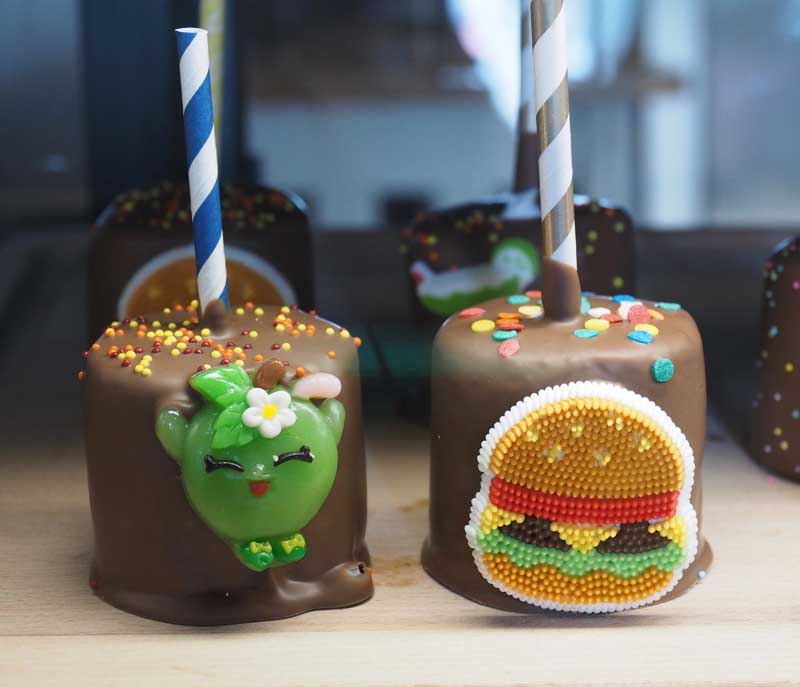 Handmade treats await you at Choccolatte’s, 807 Third St. in Marble Falls. Steve Parsons makes his items from scratch, while Michele Parsons tops them off by hand using her decorating skills. Staff photo by Daniel Clifton

As a couple of people enter the shop on this day, Steve gives a pleasant, “Hi, how are you doing?” Then, they’re sharing a conversation. Whether or not the visitors buy anything doesn’t matter to Michele and Steve or their employees because they simply treat anyone who walks through the door as a friend.

“That’s one of the things we’re known for: our friendliness,” Michele offered.

It also doesn’t hurt that they’ve created a bounty of candies, chocolates, coffees, and more that drip with flavor. A trip to Choccolatte’s brings a smile to a person’s face, which is something Steve loves to see and one reason he spends so much time creating and baking.

Steve comes from a hotel management and restaurant background. When he began exploring the world of chocolate more than eight years ago, he didn’t know a thing about it, but one of his attributes is his worth ethic, something Michele also shares.

He’s pretty much self-taught when it comes to making chocolate, candies, coffee, and gelato. Steve would see something he’d want to learn how to do, so he’d study it, ask a lot of questions, then envision where he’d want to go with the subject. Through his creativity and tenacity, he would get there or, if not, somewhere better.

The result was usually a delicious.

While Steve does the baking, Michele adds the finishing touches such as the decorations on the truffles. Her detailed artwork adds another element to Steve’s creations.

The plan and partnership have worked because Choccolatte’s has earned national fame through news articles. It all goes back to the couple’s emphasis on hard work, treating people as family, and using high-quality ingredients for a great product.

Stepping into Choccolatte’s is a rare treat with its inviting decor and use of natural light.

Michele nodded in agreement, saying, “That’s what we want.”

Over the past year or two, others have tried to entice the couple into moving the shop to another location, but they love their spot on Third Street. Along with the shop, the Parsons offer a full-meal catering service, not just desserts.

Plus, the pecan English toffee has garnered quite a reputation — even with some fans in Slovakia. They sell it through wholesale outlets in several places across Texas. Steve and Michele admitted they could probably grow that portion of the business faster and larger if they spent more time on it, but that would take them away from the shop.

“This is what we love,” said Michele, referring to Choccolatte’s. “We love being a mom-and-pop shop.”

They mean that because the phone numbers on their business cards are their direct cell numbers.

“When you call that number, you’re calling me,” Steve said. “I get calls at 9 o’clock at night and Sundays. It doesn’t matter when, I pick it up.”

Michele said it’s nothing for them to run up to the store after someone called and said they really wanted some toffee but the shop is closed or they stopped by hoping to see Steve and her, but they weren’t there.

“We don’t mind coming up and opening up if they’re coming through town or they’re heading out and want some toffee or something,” she said. “It just comes back to taking care of people.”

“They’re family,” Steve said about the regulars and newbies. “We want them to come back.”

And it all started because Michele just found those milk chocolate and caramel truffles something she had to walk up the stairs for — over and over and over again.

Go to choccolattestx.com for more information, or better yet, just stop in. Choccolatte’s is open 10 a.m.-5 p.m. Monday-Saturday and 11 a.m.-4 p.m. Sunday. The Parsons also own Third Street Treasures, a home furnishing, gift, and jewelry store, which is located next door. They handpick the items found in the shop.