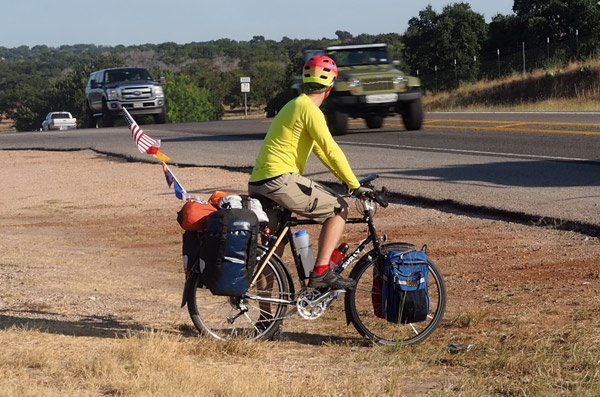 Chris Register, an attorney ‘on break,’ prepares to get back on Texas 71 near the turn to Horseshoe Bay. Register is pedaling from Houston to Death Valley in California — not so much for the exercise but to collect the stories of Americans. He has already made two similar journeys: one across the Deep South and another through the Midwest. Staff photo by Daniel Clifton

LLANO — Chris Register knows he’s not going to make it to Llano by dark Oct. 2, so he’s hunting for a place to crash along Texas 71. He’s hoping for a quiet spot under some trees.

A little pulloff not far up the road from the RR 2147 intersection might be just that spot.

“Yeah, I think I’ve seen it before,” he said with an air of confidence mixed with a fair amount of exhaustion.

He started the day well east of Llano County, probably near Giddings. It’s only a couple of days in on his journey from Houston to Death Valley in California.

Register understands the challenges of such a ride, but it’s not about the distance for him. It’s about the country and the people along the way.

“I always thought there was more to this country and the people than what we’re told by the news or led to believe,” Register said. “I thought we’re more complex than simply a box that we’re supposed to check that says, ‘conservative’ or ‘liberal,’ ‘Republican’ or ‘Democrat.’

Traffic is speeding by. He admitted he didn’t like traveling on roads such as 71, but on this part of the trip, it’s his only choice.

This leg is actually part of a nine-region journey on which Register plans to criss-cross the United States. The American Southwest is the third of the series, which actually started after he graduated from law school in 2009. Full of questions about who we, as Americans, are as a people, Register devised the project Conversations with US.

“The bike is a conversation starter,” he said, looking over his Surly Long Haul Trucker designed for long trips. Panniers and bags are loaded down with supplies. He’s a one-man, self-contained story catcher.

After the first leg through the Deep South, Register, who is from Washington, D.C., got the chance at a really good job. So Conversations with US took a hiatus. But earlier this year, he decided he needed to get back on the road and work on the project.

The first leg since the break was what he calls “Water, Steel & Grit,” which started in Duluth, Minnesota, and stretched across to Rochester, New York.

Journeys such as Register’s aren’t really new. Throughout the course of the country’s history, people have journeyed around the United States trying to learn about its people. Alex de Tocqueville, a French political thinker and historian, traveled the young United States to learn about its new democracy. He ended up writing the book, “Democracy in America,” in two volumes.

“Charles Kuralt did it,” Register said. “John Steinbeck did it in ‘Travels with Charley.’ So it’s been done before, but I thought it was time for a renewal.”

As he pedals west, Register arranges interviews with people. Sometimes, he gets the interviews, but occasionally, like on Oct. 2, he comes up a bit short. But he doesn’t get discouraged because Register knows there’s a lot of stories out there, and, with each one, he gets a better picture of America.

“I refuse to believe that the country can be divided up into little tribes, little camps, and that’s all we are,” he said. “I think people are much more complex than that.”

And so far, much of his journeys have borne that out. He’s come across people who, when you look at them, you’d think they walked a certain line and didn’t step off it. But it’s not that way, he pointed out.

“I find that people don’t always check the litmus boxes for left or right,” he said. “That was a pleasant surprise for me.”

Register has also learned that, in some ways, we still have a ways to go. During his Deep South tour, he heard quite a bit of bitterness toward President Barack Obama. But much of it wasn’t necessarily for the job the president was doing.

“A lot of it was because he’s black,” Register said. “I thought we had moved past that (racism), but it’s still there in some forms. I guess we still have some work to do.”

Which makes efforts such as Register’s so very important.

When he wraps up all nine of the regions, Register plans on writing a book of his travels and sharing those stories he heard and experience along the way.

“We seem more polarized now,” Register said of the country. “But I don’t think there’s some imaginary line that divides us. Like I said, people are more complex than that, and I hope people see that and realize there’s a lot that joins us together.”

It’s something he’s learning one revolving wheel after another.