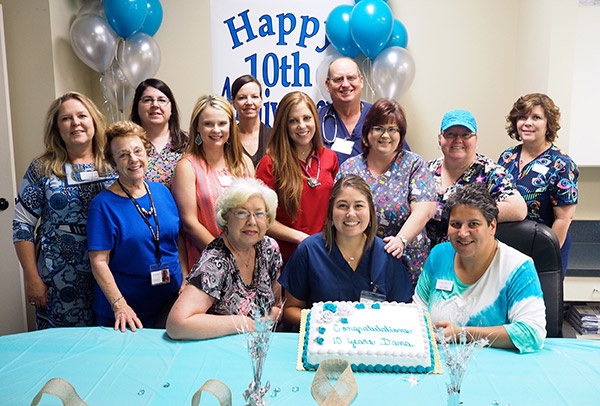 MARBLE FALLS — In a type of nursing that sees continuous changes and stresses, it’s quite common for nurses to cycle through home health care at a fairly fast rate. So when Dana Bostic of Texas Home Health in Marble Falls marked her 10th anniversary in it, the staff decided to celebrate.

“It’s just a challenging and stressful field because it’s always changing. There are constantly new rules and things to keep up with, so we see a lot of turnover in home health nursing,” said Vanessa Nunnelly, executive director of the Marble Falls facility. “So when we have somebody, like Dana, who has has been here for 10 years and continues to give such great care, we think it’s something worth celebrating.”

Bostic smiled slightly at the praise. While she acknowledged the challenges the profession faces, she really can’t see herself doing any other type of nursing — and she tried a few others before coming to home health nursing.

“I love the interactions and the relationships I get to have with my patients,” Bostic said. “In home health care, you really get to know your patients and their families. That’s one of the reasons this is so special.”

Bostic’s first lessons in health care came at an early age. She was diagnosed as a diabetic at the age of 6. This meant more medical care and treatment than many of her peers. For some, all the medical attention at a young age might have left them looking for any career field other than medical. Bostic’s positive experiences with her doctors and nurses had the opposite effect.

“I remember how the doctors and nurses always treated me like I was their family,” she said. “And that just left a big impression on me.”

As a student at Burnet High School, Bostic took several health sciences and related classes. She became active in HOSA (Health Occupation Students of America). Bostic credited teacher Tina Jones for really showing her that nursing and health care could be her future.

“She was a big inspiration to me,” Bostic said.

After high school, Bostic earned her nursing degree and returned to the Highland Lakes, where she first worked a doctor’s office and then in a dialysis program.

But it was home health care where she found her niche.

“In home health care, we go into the home and treat patients and try to get them back and functioning at a level they can stay at home,” she said.

Gloria Vaughan of Texas Home Health said one of the underlying mission’s of home health care is to help people stay as independent as possible and allow them to live at home.

Nunnelly said nurses such as Bostic are a big key to their patients remaining independent as possible.

“It’s very difficult to find somebody who has high standards and consistently performs at a high level for 10 years,” Nunnally said. “Dana, she’s one of those who does and works so hard for her patients.”

Bostic counts herself fortunate to have found a career that she loves and directly improves the lives of others. As for her dedication and high level of patient care, she goes back to the doctors and nurses who treated her just like she was one of their own children.

“They didn’t have to treat me like that, but they did,” she said. “So, I try to treat every patient like they were my family.”

And she plans on doing it for many years to come.