All aboard! Day Out With Thomas arrives in Burnet this weekend 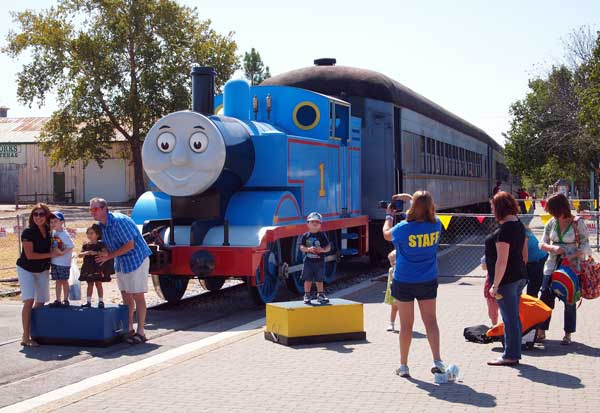 Day Out With Thomas the Tank Engine returns to Burnet on Sept. 30-Oct. 2. Go to austinsteamtrain.org to purchase tickets. File photo

All aboard! Day Out With Thomas arrives in Burnet this weekend

BURNET — He’s coming back, and he’s bringing a bunch of friends.

The Austin Steam Train Association hosts the event. All rides start from and return to the Burnet Community Center, 401 E. Jackson St.

Tickets for the train rides are available at austinsteamtrain.org, though a limited number of walk-up tickets will be available each day.

Thomas the Tank Engine got its start as a story the Rev. Wilbert Awdry told his son, Christopher, when the youth was sick. Eventually, Awdry began putting the stories down in written form, which became “The Railway Series,” published in the 1940s and built upon those early tales. Thomas the Tank Engine first appeared in a book in 1946.

Awdry continued “The Railway Series” until 1972 with 26 books, but his son added more books to the series.

But it was Thomas who seemed to capture readers’ attention.

In 1984, Thomas took to the TV and has since added a number of episodes and movies under his engine.

The story is set on the Island of Sodor, where Thomas and his friends enjoy a number of adventures. But through each story, the characters, readers, and viewers learn a little about the world around them.

During Day Out with Thomas, visitors can enjoy a number of activities, including the Thomas Imagination Station, which features interactive play; the inflatable Cranky the Crane; storytelling; a live performance by Circus Chickendog; miniature golf; a climbing wall; and even a gift shop.

You can also get a nice Thomas the Tank Engine or other character tattoo.

OK, the tattoos are temporary but still fun.

The train ride is a 25-minute excursion that takes folks out and back in a train pulled by the star himself, Thomas.

There will also be a number of photo ops available with Thomas and his friends such as Sir Topham Hatt.

The event is 11 a.m.-5:30 p.m. Friday and 8 a.m.-6 p.m. Saturday and Sunday. Officials recommend people arrive an hour prior to their scheduled train ride to allow for parking and other activities.