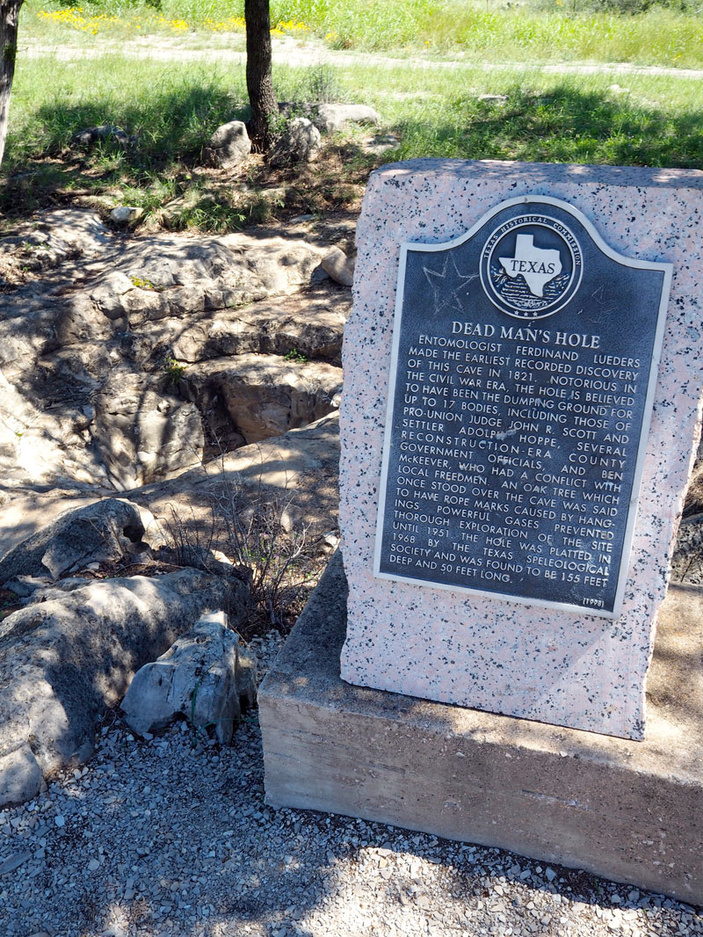 A historical marker gives a brief history of Dead Man's Hole, located on CR 401 southwest of Marble Falls. The synopsis, however, can't recreate the fear and horror people in Burnet County — particularly Union sympathizers — felt about the hole during the Civil War and Reconstruction years. Some estimates claim as many as 36 people ended up in Dead Man's Hole, though historians can only connect about five names to it. Still, for several decades the thought of ending up at the bottom of Dead Man's Hole sent shivers down many a person's neck. Staff photo by Daniel Clifton

Adolph Hoppe raced along as the brush whipped against him. He had ground to cover to get home, but he could feel the fire eaters closing in on him.

As he pushed his horse on, he cursed the day he left Germany for the Texas Hill Country. Though wracked by economic hardships when he left his home country, at least it didn’t boast things such as the fire eaters.

It was the mid-1860s, and the United States was in the midst of the Civil War. The Hill Country and Burnet County remained well outside the scope of the fighting between Union and Confederate forces, but the war wrangled itself into everyday life.

Though Burnet County voted against secession, 248-149, in 1861, some of the Confederate supporters turned to violence when it came to dealing with Unionists. Many of the Union supporters moved to Burnet County and the Texas Hill Country from non-slave states or from overseas.

Now, as Hoppe raced for safety, he understood all too well what awaited him if the fire eaters caught up: a trip to the bottom of Dead Man’s Hole.

The notorious hole became a macabre part of Burnet County lore during the times of the Civil War and the following Reconstruction years. Rabid Confederate supporters — often called fire eaters —supposedly disposed of more than 30 Unionists in deep pit.

In 1821, an entomologist and naturalist named Ferdinand Leuders discovered the hole in what would become Burnet County, about a half-dozen miles southwest of the future Marble Falls. At first, it was simply a hole in the ground, but it would earn a dark reputation as the Civil War approached and then burst upon the land.

Dead Man’s Hole sat on private land until 1999, when the late Ona Lou Roper deeded a 6 1/2-acre tract of property that included the hole to the county. Now, people can drive down CR 401, turn on to a rock road where a sign says “Dead Man’s Hole” and get a look at the notorious cave.

It looks and sounds almost harmless today (a metal door keeps people out of the cave itself), but during the 1860s, Union loyalists feared the hole and did all they could to avoid a trip to it. Many failed, including Burnet County Judge John R. Scott.

Though he had four sons serving in the Confederacy, many local Confederate supporters viewed him as a Union sympathizer. The judge, catching wind of this and possible plans to dispose of him, decided to head for Mexico. But before he could even get out of the county, fire eaters caught up with him.

Scott’s escape attempt ended when they dropped his body into Dead Man’s Hole.

Some claim the hole took in 36 people, while others say the number is closer to 17. Officially, the names of only five people are associated with Dead Man’s Hole. The truth is we may never know how many exactly came to rest in Dead Man’s Hole. Even though a gaseous environment prevented a full exploration of the hole until the 1960s (when researchers determined it to be about 155 deep and 50 feet long toward the bottom), some families did recover their loved ones' bodies long before that — even during the Civil War and Reconstruction years.

All this probably mattered little to Hoppe as he crashed through the brush and trees trying to evade the vigilantes on his trail. He knew what would happen if they caught him because only hours before he witnessed the group along with a “ranger” hang a man with whom Hoppe was cutting posts - Henry Flaugher*.

Like Hoppe, Flaugher held pro-Union sentiments, though he tried to keep those ideas to himself. Several of Flaugher’s relatives — including a daughter and her husband — had already fled the area, but he stayed.

On that day, Flaugher and Hoppe went to cut and gather wood for fence posts. As they worked, a group of men — described by some as vigilantes — approached. The men “tried” Flaugher and Hoppe for supposedly attending pro-Union meetings. The ranger found Flaugher guilty and, with that, hung him from an oak tree over Dead Man’s Hole. After carrying out the sentence, the group dropped Flaugher’s body into the hole.

The ranger didn’t find Hoppe guilty and let him go. However, when the ranger left, the fire eaters decided to chase down the German immigrant.

And across the hills and through the oaks, the group pursued Hoppe.

His only hope was to put enough distance between him and the fire eaters and make it home.

Hoppe’s family knew something was wrong when his horses showed up at home without him. They went out and searched for him. Eventually, they ended up at Dead Man’s Hole, where they found what they believed to be a piece of a harness he owned. After immigrating to Burnet County about 20 years earlier from Germany in hopes of escaping his home country's deep economic depression and carve out a new life for himself and his family, Hoppe’s legacy will forever be tied to a deep, dank hole.

The oak tree (which is no longer there) that towered over the hole is said to have bore the scars of several hanging ropes used in the murder of numerous people during this tumultuous period of Burnet County. Though not thought to be haunted, Dead Man’s Hole definitely filled people of the 1860s with fear and dread. Even now, it remains a dark spot in the county’s history — one that if somebody whispered, “You better change your ways or you’ll end up in Dead Man’s Hole,” you knew what they meant, and you’d jump anytime the wind stirred up leaves behind you.

(*The historical record of the deaths associated with Dead Man’s Hole generally relies on oral histories and similar reports. The number of people and ways they may have met their deaths can still be a matter of some speculation. Even family reports regarding Hoppe’s and Flaugher’s deaths differ as some say the men were killed on the same day and some say Hoppe was killed several days later. Another story has it that Hoppe was working with a field hand at the time, not Flaugher. Regardless, Dead Man’s Hole earned its notorious moniker due to its dark use during this era in local and American history).