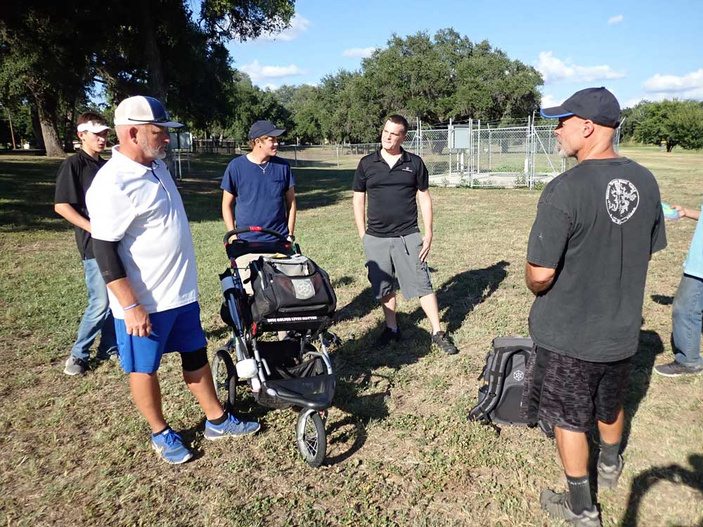 MARBLE FALLS — Who puts a tree 20 feet in front of a tee?

"Just throw to one side or the other," Jacob West advises.

Straight into the tree.

Mike Chesnut, off to my left, starts laughing.

“I’m not laughing at you. I'm laughing with you," he assures me.

That tree, on the eighth hole, was only one challenge as I tried my hand at disc golf with the Hill Country Flyers, a group of local disc golfers who frequent the courses at Haley Nelson Park and the YMCA of the Highland Lakes at Galloway-Hammond in Burnet as well as Westside Park in Marble Falls.

"It's just like ball golf, but with a disc," explained West before we started a round at Westside Park.

The Westside course features nine baskets (holes), but the city of Marble Falls and the Hill Country Flyers have added a second tee box to each one to make it an 18-round course. West and Chris Sandman, also a Flyer, said the city is discussing adding nine more holes just southwest of the railroad tracks that cut through one side of the park.

Most of the players on this Wednesday evening at Westside brought a backpack full of discs and other necessities, including water. Chesnut, however, rolls along what appears to be a modified baby stroller (sans child) with an overloaded bag of discs, a sound system, and just about everything one would need to play a round of disc golf — or stave off a zombie attack.

He turns up the music as the group heads for the first tee box.

"It's not a quiet sport, like the other golf," he explains.

Chesnut plays the "other" golf as well, but about four years ago, he and one of his sons checked out a disc golf tournament in San Antonio.

"We weren't sure if we were dressed right," he said, noting they were in shorts and typical Texas summer wear. "We thought maybe you had to dress like you were in regular golf."

When they arrived, they did spot a couple of people wearing golf attire, but many were dressed in shorts and T-shirts.

"There was a guy in overalls, no shirt, and flip-flops," Chesnut recalled. "We fit right in."

Disc golf is a very laid-back game and a great way to enjoy the outdoors by yourself or in a group.

Chesnut lets me use his discs, and everyone offers advice. When my first drive from the No. 1 tee climbs high (much higher than anyone else's), slows, and then hooks hard to the left before crashing to the ground well short of the hole, there is no laughter, just advice on how to throw the disc better.

As we walked along, West explained that your wrist naturally wants to twist upward when throwing a disc. The key is getting it to remain parallel to the ground.

"It takes time and practice," he said. "You have to think about it when you're doing it, but eventually, you just do it that way."

The other golfers take their turns, their discs hugging the curvature of the Earth like cruise missiles. Well, a few slip a little to the left or right, but compared to me, these guys have it dialed in.

Except, when they don't. Eventually, almost everyone has an errant disc.

"It's kind of simple," West said of disc golf before the round started. "It takes one minute to learn but a lifetime to master."

My minute of learning is more like an hour, but they're right: Disc golf is fairly easy. You stand in the tee box and drive as close to the basket as you can. Then, you keep throwing the disc closer and closer until it lands in the basket.

It's typically not a one-disc sport, but Chesnut said all you really need to get started are three discs: a driver, a mid-ranger, and a putter. A basic package can cost $25-$30. 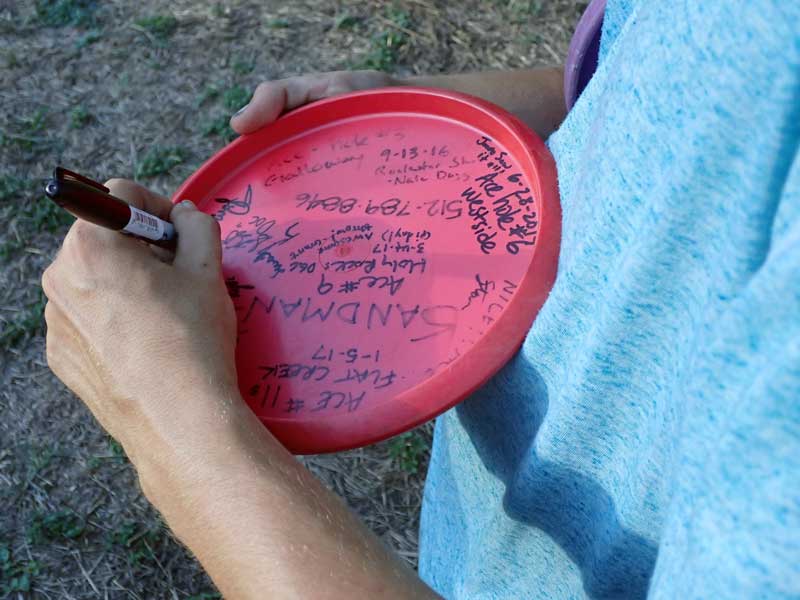 After someone lands a hole-in-one, all the other disc golfers playing the round sign the person’s disc. Staff photo by Daniel Clifton

"The great thing about disc golf is you don't have to pay to play," West said. "Most cities have courses in their parks, so you just show up and play."

The city of Burnet boasts two courses: one at Haley Nelson, 301 Garden Trails Drive, and the other at the YMCA, 1601 S. Water St. (U.S. 281). Marble Falls has one at Westside Park, located at Second Street and Avenue Q. Llano recently installed one at Badu Park, 300 Legion Drive.

John Houck, a well-known course designer, laid out the Westside course. West pointed out that the holes take advantage of the terrain, the natural lay of the land, and yes, the trees. He describes the first few baskets as "open" holes with a mostly clear fairway. On the next few holes, however, we had to navigate several trees and natural obstacles.

On one hole, we work our way alongside a feeder creek to Backbone Creek. A giant, elderly oak tree guards the basket with its outstretched limbs.

West fires a disc with radar-guided precision through the trees and between the guardian oak's limbs. He doesn’t get a hole in one, but it’s pretty close to the basket.

My disc flies along a ravine and into the creek bed 12 feet below.

"It stayed dry," someone points out.

By the fourth or fifth hole, my discs were flying a bit better, and I used more strategy, laying up where I needed to and not trying to power over an obstacle.

The sixth tee box overlooks Backbone Creek before it dives under the railroad tracks. The first few players easily get their discs across the creek and near the basket.

Sandman, probably the most veteran of the group, launches his disc. It sails true and rings the chains of the basket — a hole-in-one. Everyone signs the disc, a tradition for holes-in-one.

Then, it’s off to the next hole and, eventually, the looming tree.

I don’t let the tree get the best of me, taking the drop and pressing on. That's the great thing about disc golf: You suffer a setback and keep going, laughing a much as you can, just like in life.

I still have work to do, but as West pointed out, the game’s easy to learn but takes a lifetime to master.