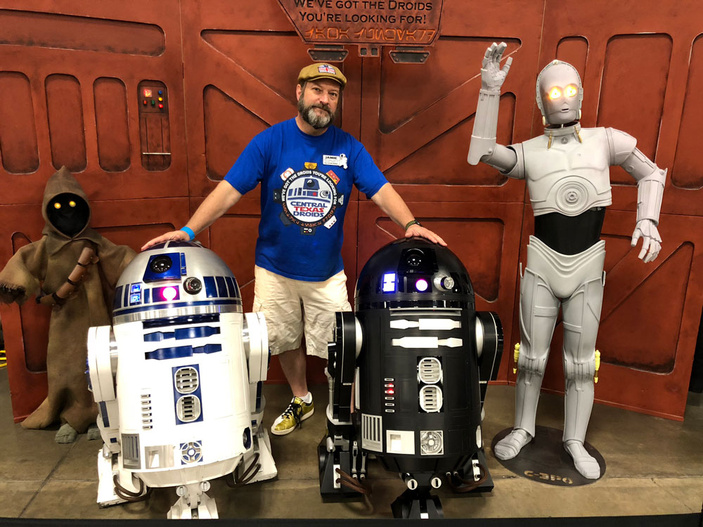 Jamie McShan and fellow members of Central Texas Droids will showcase their hand-built droids, including R2-D2 of 'Star Wars' fame, at the Science Mill’s Drones and Droids event Saturday, June 22. You can also check out high-speed drone racing and a micro-drone obstacle course. Courtesy photo

From drone racing to an R2-D2 replica, the Force will be with you during the Science Mill’s Drones and Droids event Saturday, June 22.

Jamie McShan of Central Texas Droids built his version of R2-D2 based on the designs of the original "Star Wars" droid. He and two other club members will give presentations at 11 AM and noon during the Science Mill event. Space is limited for both, so arrive early.

A fan of "Star Wars" ever since the movie franchise debuted in 1977, McShan jumped into the world of droid building in 2008 when he learned there was an R2-D2 builders club made up of like-minded people from around the world.

His R2-D2 is a full-size replica of the one from the films and even moves and articulates like a droid as well as performs other functions. McShan hopes children will be inspired to build their own creations by seeing his droid in action. “You don’t have start with something like this,” he said. “I started with Legos and just started building things.”

And it grew from there.

Instead of throwing away a broken toy, McShan would love to see kids ask “how does this work?” and pull it apart for the answer.

“Maybe even fix it,” he said. “Or, use it to build something else. Just try to think outside the box. It’s looking at something and saying, ‘What can I make this into?’”

Along with droids, you can learn about the fascinating world of drones at the June 22 event, specifically drone racing.

A drone pilot from Flynoceros, a company that builds and flies drones, will put a pro-racer, first-person-viewer drone through its paces in the Science Mill’s backyard. Guests can don goggles to experience the flight firsthand. Inside the museum, a pilot will maneuver a Flynoceros Tiny Whoop micro-drone through an obstacle course set among the exhibits.

A team of middle school students participating in the NASA Apollo Next Giant Leap Student Challenge will give presentations at 2 PM and 3 PM. The project recreates the Apollo 11 moon landing using drones and robots.

The museum is located at 101 S. Lady Bird Lane in Johnson City.