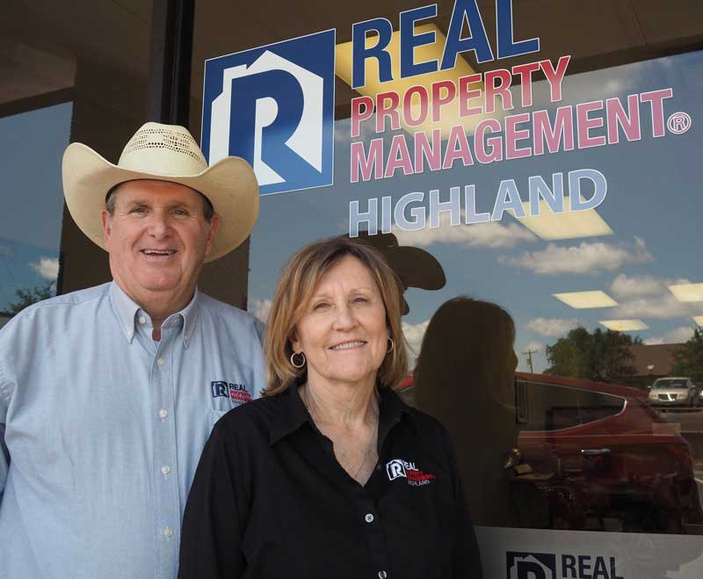 Earl and Rhonda Bishop don’t envision a retirement of sitting in their rocking chairs and watching sunsets. After several decades of working for the government, the couple retried but then hit the road for a four-year RVing odyssey that took them to each of the 50 states (they didn’t take the RV to Hawaii). After those four years, they realized they still had a lot of offer, so instead of retiring, the Bishops opened their own property management business in Marble Falls. Staff photo by Daniel Clifton

MARBLE FALLS — In some ways, Earl and Rhonda Bishop are living the American dream as new small-business owners. In other ways, the Marble Falls couple has already realized that dream.

“We’re starting a new chapter in our lives,” Earl said.

They already have a few chapters behind them, including one that covers a life-threatening illness and another that led to each of the 50 states.

“There is still so much we can do,” she added. “We’re not ready to just sit around and, you know, do nothing.”

The Bishops are among a growing number of retirees who have completed successful careers but decided rocking away their golden years isn’t on their to-do lists — or, for that matter, any list.

With several decades of experience, the Bishops believe they have a lot to offer. The couple recently opened a Real Property Management franchise in Marble Falls, which serves the Highland Lakes from Blanco to Liberty Hill to Llano and everywhere in between.

“He’s always been interested in owning his own business,” Rhonda said of Earl.

During his 35 years with the IRS in the Dallas area, Earl had a couple of businesses on the side but didn’t oversee the day-to-day operations.

The road to opening a Real Property Management franchise wasn’t exactly a straight one. It went through a bout with pancreatic cancer and more than one golf course.

Earl retired — for the first time — in 2007 after 35 years with the IRS. Rhonda, however, wasn’t quite ready and kept working while Earl played golf and tried his hand at other “retiree” activities. In 2010, Rhonda learned she had pancreatic cancer.

Clearly, it seemed like the time for her to take a break.

“The doctor said, 'Keep on working,'” she recalled.

“Otherwise, you know, she’d probably just think about the cancer,” Earl said. “That wouldn’t have been good.”

Over the next couple of years, Rhonda worked, underwent treatments, and eventually got the upper hand on the cancer. In late 2012, she joined Earl in retirement.

Now would be the time to cut to a scene of the two sitting side by side in a pair of rocking chairs on their front porch, holding hands and glasses of wine.

No, Rhonda said, that’s not what happened.

“Three months after I retired, we had sold our house, most of our things, and were on the road,” she said with a laugh.

While they both played, Earl is the avid golfer of the two. For years, he harbored the idea of playing at least one round of golf in each of the 50 states. In February 2013, the Bishops set off on that quest.

Life on the road was good. They traveled at their own pace in their recreational vehicle, sometimes connecting with other RVers.

The golf was great, Earl said. He and Rhonda managed to play in every state — often more than once. One of his most memorable outings was on a course in Coeur D’Alene, Idaho, but each was special.

For the next four years, the Bishops crisscrossed the country and a big chunk of Canada, and then it was time to finish that chapter.

Though they had spent the better part of their adult lives in the Dallas/Fort Worth area, they settled in Kingsland, ready to begin a new chapter.

Did this one would include the two rocking chairs?

“I can’t just do nothing,” Earl admitted.

His wife nodded her head. It’s an attribute they share.

Rhonda had always wanted to try her hand at flipping houses, but along with big payouts comes big risks when purchasing old homes, renovating them, and then selling them.

“What happens if we get into a house and something’s wrong with its foundation,” he said. “We could lose a lot.”

Property management, however, gave them a way to combine many of their interests, and with a growing Highland Lakes, it seemed like the perfect business for the couple.

Before jumping in, the Bishops researched the industry as well as the market and other factors.

In April, Earl and Rhonda Bishop opened the doors to their Real Property Management office at 407 Main St., Suite No. 6.

“What we really wanted was to be a part of the business community,” Earl said, "and this gives us that chance.”

After four years on the road swinging golf clubs, Earl is ready to give the links a break. Rhonda pointed out that just means he’s not heading for the tee box every day. Earl’s carved out a little time, at least once a week, where he can grab the clubs for a morning round and be back in the office just by noon.

“That works for me,” he added with a laugh.

Now, they agreed, it's time to get back to work, something they look forward to each day.

Earl and Rhonda, you both are looking GREAT!! So glad Rhonda is doing well. I wish you both the very best and I know you will do well in this newest chapter of your lives. Thanks for sharing this great article!