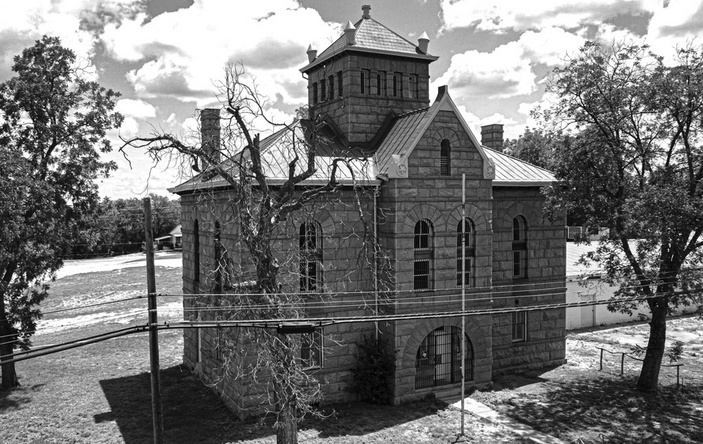 The Red Top Jail has been standing for 127 years on the corner of Oatman and East Haynie Street in downtown Llano. Built in 1895, it served as the Llano County jail until 1982. Now, visitors can tour the jail to experience history and hauntings firsthand. Staff photo by Dakota Morrissiey

The old Red Top Jail stands on a remote corner in downtown Llano, surrounded by empty lots, power lines, aging pecan trees, and even a few bed-and-breakfasts. It's a formidable building, out of place in the modern world.

The structure is composed of hundreds of tons of stacked granite containing family living quarters, iron prison cells, and a trapdoor for hangings, all capped by an iconic red roof and execution tower. 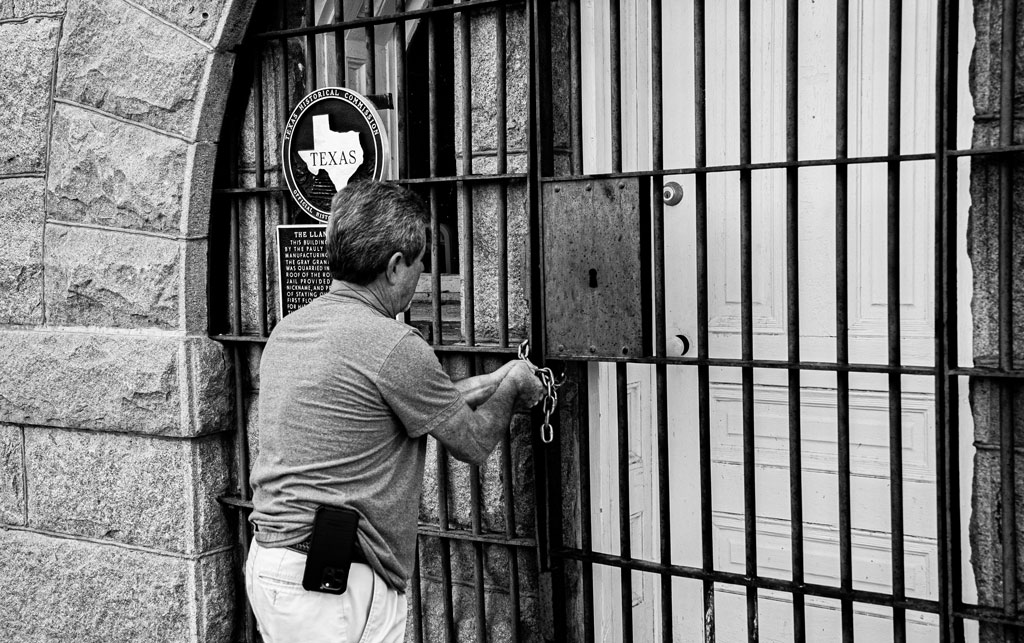 The entrance to the Red Top Jail set the tone for the entire tour. The iron-barred door swung open and revealed a battered interior, heavily shadowed, even in daylight. This was the entrance used to check in prisoners. Staff photo by Dakota Morrissiey

The whole thing was put together for $11,500 in 1895 during the waning Wild West days of frontier Texas. The Romanesque Revival style of architecture was all the rage in the late 19th century, evident in the smalltown courthouses across the Hill Country, an example of which is just a few blocks away on the Llano County Courthouse square. The jail is characterized by arched entryways and windows, heavy stonework, and stark towers jutting from the roof.

“When you walk into this jail, it feels authentic,” said Matt Hilton, the current president of the Friends of the Red Top Jail, an organization dedicated to revitalizing the building and converting it into a museum-quality historical site.

Hilton recently gave me a solo tour of the jail. When asked about ghosts, he said he had never seen one but has heard the stories and admitted that the upper floors could raise the hairs on your neck. 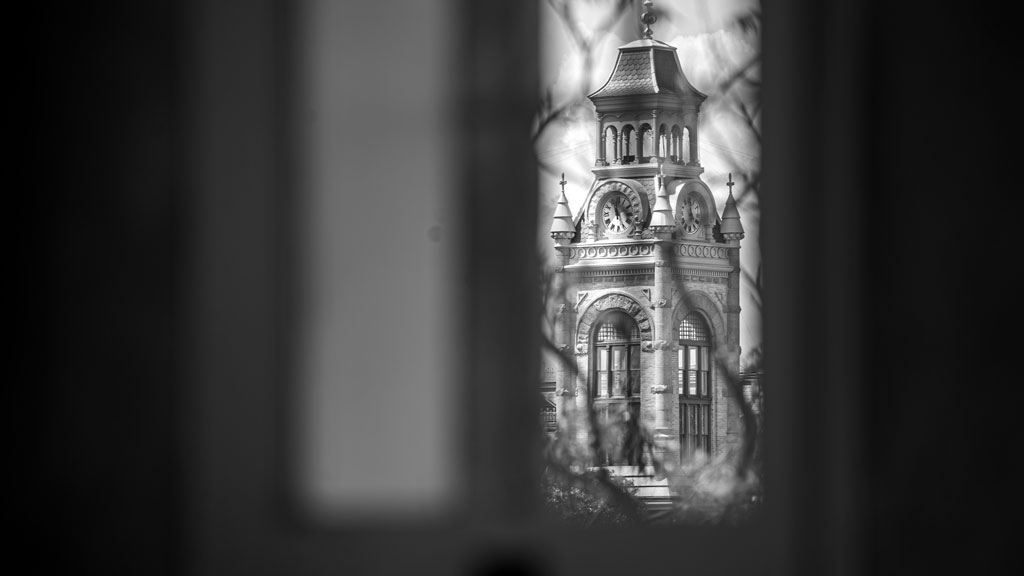 A view of the Llano County courthouse from a window at the top of the Red Top Jail. The fifth floor of the jail is the top of the execution tower. Prisoners would have had a noose secured around their neck and been dropped through a set of trap doors, their final view being the courthouse. Staff photo by Dakota Morrissiey

Llano is by no means a bustling metropolis, but signs of modernity are everywhere, even around the old jail. A Tesla-charging station sits in view just across the street. Llano Beer Co. and Llano Craft Distillery are a stone's throw away, part of the reason traffic has picked up in the area. All of that noise, that sense of everyday modern life rushing past, shuts off once you step inside the jail’s solid granite walls.

Even on the first floor, with the front door wide open, the thick rock walls deaden the noise of the outside world. I found that the deeper into the jail we went, the further removed I felt from the present.

The first floor functioned as the living quarters for the jailer and their family. Generations grew up in the rooms Hilton walked me through. A display case filled with old photos, flyers, and keepsakes discovered in the bedrooms gave some insight into the lives of the people who called this place home over the years. 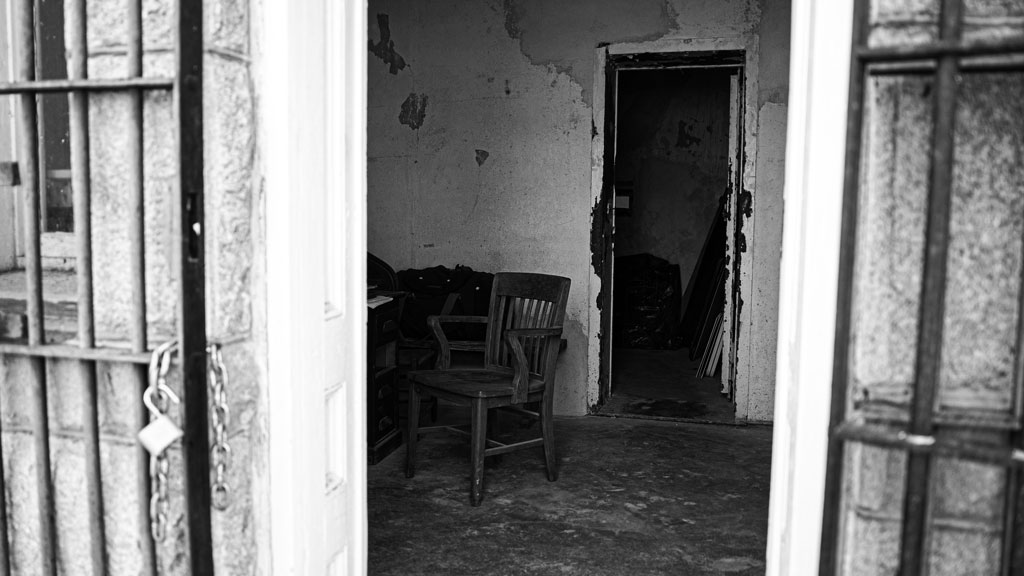 The entrance to the Red Top Jail set the tone for the entire tour. The iron-barred door swung open and revealed a battered interior, heavily shadowed, even in daylight. This was the entrance used to check in prisoners. Staff photo by Dakota Morrissiey

When it comes to hauntings, the first floor might be the best candidate. Members of the jailers’ families were born and died here. According to Hilton, some tell of seeing the ghost of a little girl wandering the halls, though he hasn’t seen her himself.

The first floor retains some of the comforts of home, and that was what made it odd. I kept feeling as if I was intruding in someone else's personal space. Even with the battered walls and sparse furniture, it felt like a family still lived there.

A metal staircase in the heart of the jail leads to the second floor, where the prisoners were kept.

Two large cells built to hold eight men each and two small cells built to hold four take up most of the interior of the second floor. Hilton demonstrated the heavy locking mechanism of an eight-man cell, creating a cinematic boom that echoed through the building as iron banged against iron.

The men slept in hammocks stretched across the cells. Tattered versions hang there now to demonstrate what it was like when the jail was in use.

I asked Hilton to shut me into one of the cells, and I peered at him through the heavy door. Surrounded by stone and iron, I felt the explicit purpose of this building in my bones: keeping people contained, away from society. 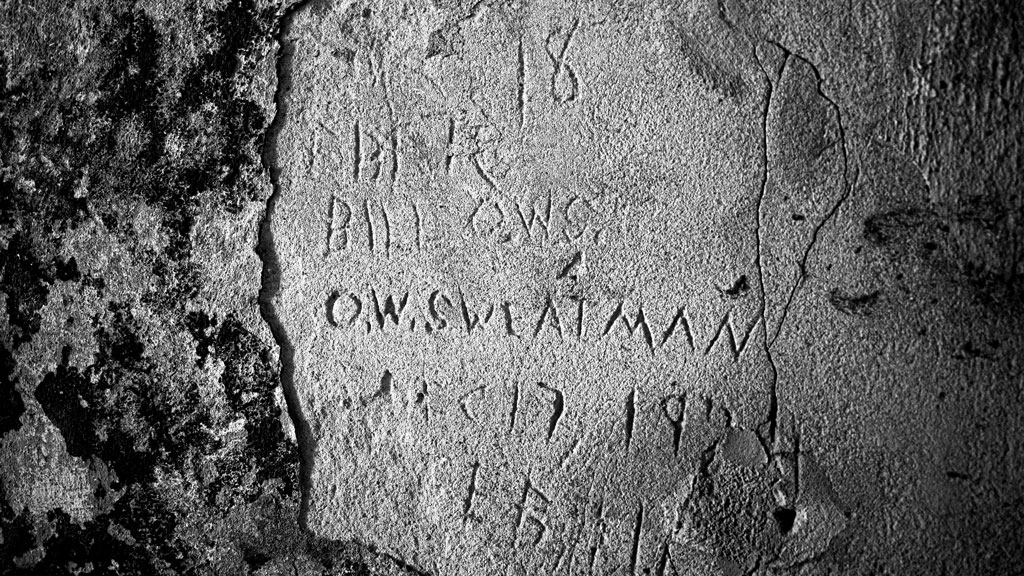 Graffiti covers almost every surface on the Red Top Jail's cell block. Inscriptions from nearly a century of prisoners are scratched into rock and metal on the second floor. Staff photo by Dakota Morrissiey

Graffiti covers the walls on the second floor. Dates ranging from the 1920s to the 1980s, when it closed, are carved on every surface available to prisoners. Hatch marks, names, and places are etched into the metal and stone, proving that generations of criminals have made their way through these cells.

Hilton pointed out another area, where a smaller cell was set aside for women. According to stories, the jailer would hang a curtain across the cell to preserve the female inmates' modesty and block the prying eyes of the male occupants.

The second floor was fun. I could almost feel a sense of mischief generated by the graffiti. Hilton even regaled me with the story of a successful escape that took place at the Red Top Jail. Unbelievably, a prisoner cut his way through an iron-barred window on the second floor using a steel file he reportedly dug out of a birthday cake. Yes, a file in a cake. It was delivered to him by a relative. 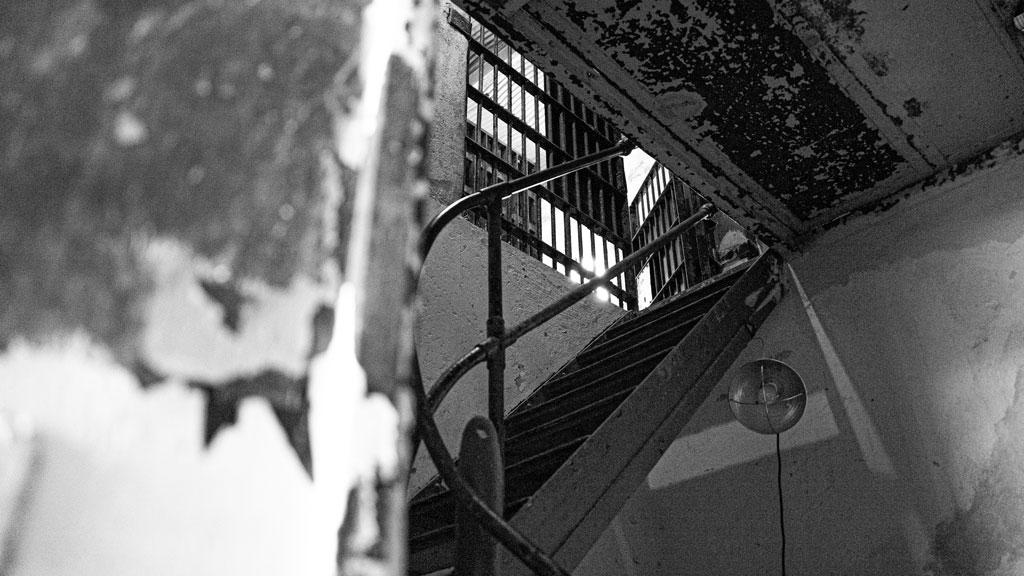 The death floor sits just below the fifth and final floor of the Red Top Jail. This is where the coroner would have observed a hanged prisoner to make sure they were dead before the noose was removed. Llano County records show that no one was ever legally hanged at the Red Top Jail, but the purpose of the floor alone is disturbing. Staff photo by Dakota Morrissiey

I heard another unbelievable story from Kim Webb, the secretary of the Friends of the Red Top Jail. In her account, a prisoner kicked out a granite block and shimmied his way to freedom on a rope made of bed sheets.

The final three floors of the jail are less complicated than the first two. They each serve one respective purpose.

The third floor is an observation deck with a bird’s-eye view of the prisoners. Jailers used it to look down into the cells.

The fourth floor is the death floor. It served as a platform for the coroner to observe a hanged criminal as he dangled in the center of the room on the end of a rope after being dropped through trapdoors on the fifth floor.

All state executions were moved to Huntsville in 1923, leaving only a 27-year window for local hangings in Llano. County records do not show a single hanging at the Red Top Jail, but the thought that these top two stories were built and dedicated to the execution of humans was a bit staggering to me. The weight of purpose on those two floors felt heavy.

The fifth floor is simple. It has windows on all sides and a gaping hole in the center of the floor. Hilton pointed to the ceiling and explained that a metal ring would have been protruding from the now-empty holes, and a rope would have been tied to that ring. I stared through the hole where the trapdoors would have been and then looked back up, out of the window. I could see the Llano County Courthouse in the distance, a reminder of the law in a room dedicated to punishment.

I wasn’t beset by spirits or visions during my visit. Hilton said he hasn’t seen any ghosts or ghouls during his visits either, but we both agreed to feeling something in the air as we walked through the old jail, something a bit otherworldly and maybe even ominous.

The Red Top Jail stands as a testament to Llano’s history, from a time of cattle rustlers, saloons, and gold fever. I am not quite convinced of the supernatural qualities of the jail, but I’d think twice about spending a night on the fifth floor.