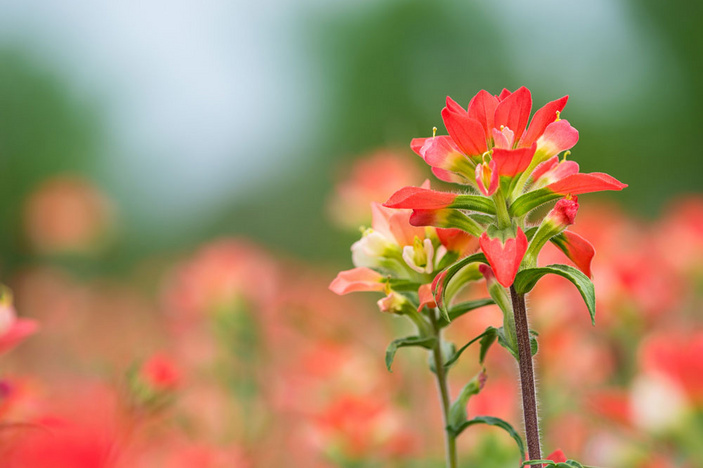 The many poetic names for the Indian paintbrush belie its baffling nature as an unpredictable parasite that can be used as both a love potion or a poison. iStock image

The name Indian paintbrush might be the most poetic aspect of this semi-parasitic weed that limits pollinators by hiding its flowers. No, the red (and sometimes orange or yellow) you see are not petals; they are bracts, a cup-like, specialized leaf that grows up around a tiny, creamy-yellow flower deep inside each cluster.

The bracts make it hard for pollinators that need to land on something to suck up nectar. Bees and hummingbirds, however, easily hover over the plants to get what they need.

Second only to the Texas bluebonnet in the Highland Lakes for proliferation and popularity, the Indian paintbrush has other poetic names: painted cup, prairie fire, painted lady, and grandmother’s hair. Move into the scientific realm, and the names get a bit grim.

Once a member of the figwort family, the Indian paintbrush was moved by botanists in 2016 into the parasitic broomrape family. Sounds like a mix of Harry Potter magic and the “Law & Order” TV series.

Figwort is a catchall for misfit plants. The broomrape category mostly includes full-on parasites that kill their host plants and have no ability to use sunlight to synthesize foods from carbon dioxide and water. Indian paintbrushes are only semi-parasitic.

The brightly colored wildflower steals water and nutrients from other plants using modified tube-like roots called haustoria. These roots reach into the soil until they touch the roots of other plants, penetrating them to suck out the food. Until its roots latch onto a host — usually field or roadside grasses — the Indian paintbrush supports itself through photosynthesis.

Another aspect of the Indian paintbrush’s nebulous nature can be found in its uses. Native Americans mixed it in both love charms and poisons. In areas with alkaline soil, which is certainly true of Central Texas, the plant soaks up selenium, a nutrient needed by the human body but one that can be toxic in certain amounts. Safest bet: Leave love to natural chemistry and the chemistry to nature.

With two origin stories, one, of course, has a dark side.

An Indian maiden helps a captive escape her village. She leaves with him knowing she will be killed for betraying her people. Homesick, she returns, but hears two men discussing how they will kill her when captured.

Using a sharp stick, she cuts a crude likeness of her camp into her leg so she will always remember it. She sticks the bloody tool into the ground and leaves, never to return. From that implement grows the first Indian paintbrush, colored with the blood of the grieving, frightened young girl.

Shrek creator Tomie dePaola’s book “The Legend of the Indian Paintbrush” is much more kid-friendly. A Native American boy named Little Gopher is too small to run, play, and hunt with his peers. A shaman assures him he has other talents just as valuable. Little Gopher decides to paint pictures of his village but can’t find colors vivid enough. One day, a voice leads him to a field of paintbrushes dipped with bright orange, red, and yellow pigment. He uses them to depict an amazing sunset that inspires everyone who sees it.

The brushes take root and return each spring, leading the people of his village to forever after call the boy He-Who-Brought-the-Sunset-to-the-Earth.

Classified as a biennial, this ambitious plant can grow twice a year or every other year. Its tiny seeds are slow to germinate. One of the most prolific areas in the Highland Lakes for these poisonous plants is on Texas 71 northwest of Pontotoc. Texas 16 west of Llano is another good stretch of road for Indian paintbrushes and bluebonnets in the early spring and every other kind of Texas wildflower the rest of the season.

Check out the Highland Lakes Wildflowers Guide for wildflower stories and identifications.