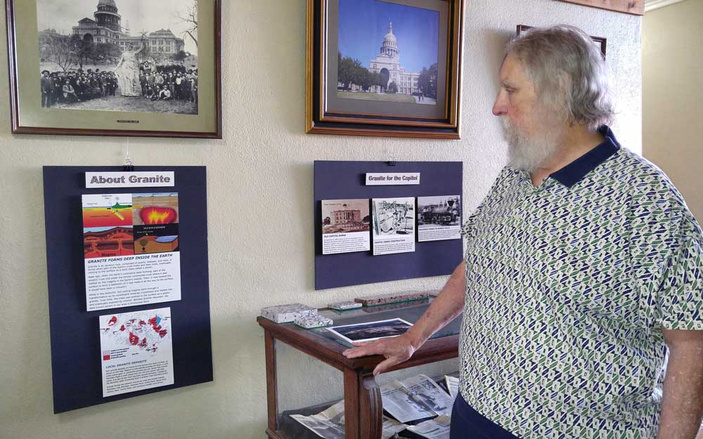 ‘The Magnificent Mountain’ exhibit developer and writer Charles Watkins created a poster that illustrates how Mother Nature makes granite. He’ll talk about that and more during the official opening of the exhibit Dec. 10 at Falls on the Colorado Museum in Marble Falls. Staff photo by Jennifer Fierro

And now he’s ready to present his findings in a new exhibit at the Falls on the Colorado Museum.

“The Magnificent Mountain” will be unveiled during an official opening from 2:30-4 p.m. Saturday, Dec. 10, at the museum, located in the old Granite Building at 2001 Broadway. The free event will include refreshments.

Watkins, who is the exhibit developer and writer, will share details about his research and interesting tidbits that might not be well-known, even to longtime residents. He has created numerous displays, including three on the first families to own Granite Mountain, the Slaughters, Lacys, and Darraghs; how Mother Nature creates granite; how it’s quarried; the buildings that are made from Granite; and other fascinating facts.

One display is devoted to the state capitol and how the Texas government obtained granite to reconstruct the building after a fire in the mid-1880s.

Watkins noted that the Marble Falls area back then had a power plant, a cotton mill, and wheat manufacturing. The issue was that it didn’t have a way to ship these materials to other places. So the city’s founder, Adam Rankin Johnson, worked out a deal with the state government.

Granite Mountain would supply granite free of charge for the reconstruction of the state capitol if lawmakers would approve building a railroad through the city. That was the only way to transport the granite to Austin.

“That’s what helped Marble Falls become one of the first industrial cities in Texas,” Watkins said. “It was a town built around a manufacturing plant. The train stopped in Granite Mountain, but it came through Marble Falls. Kids would jump on and jump off to take a free ride.”

Granite Mountain had 60 residents and a post office in addition to the train station.

Most of the granite workers were convicts, which caused masons to strike because these paid workers believed they should be tasked with quarrying the granite, Watkins said.

“Marble Falls was in newspapers all over the world,” he said. “There was enough pressure put on the U.S. government that then put pressure on the Texas government.”

That’s what ended the strike.

Watkins credited museum director and board treasurer Frances McSpadden for coming up with the idea of a Granite Mountain exhibit and then convincing him to create it.

“I’m beginning to appreciate the depth of the story,” he said. “As a newcomer to Marble Falls, I like knowing the area I’m living in.”

The exhibit will stay through February. The museum is open 10 a.m.-4 p.m. Thursday-Saturday.