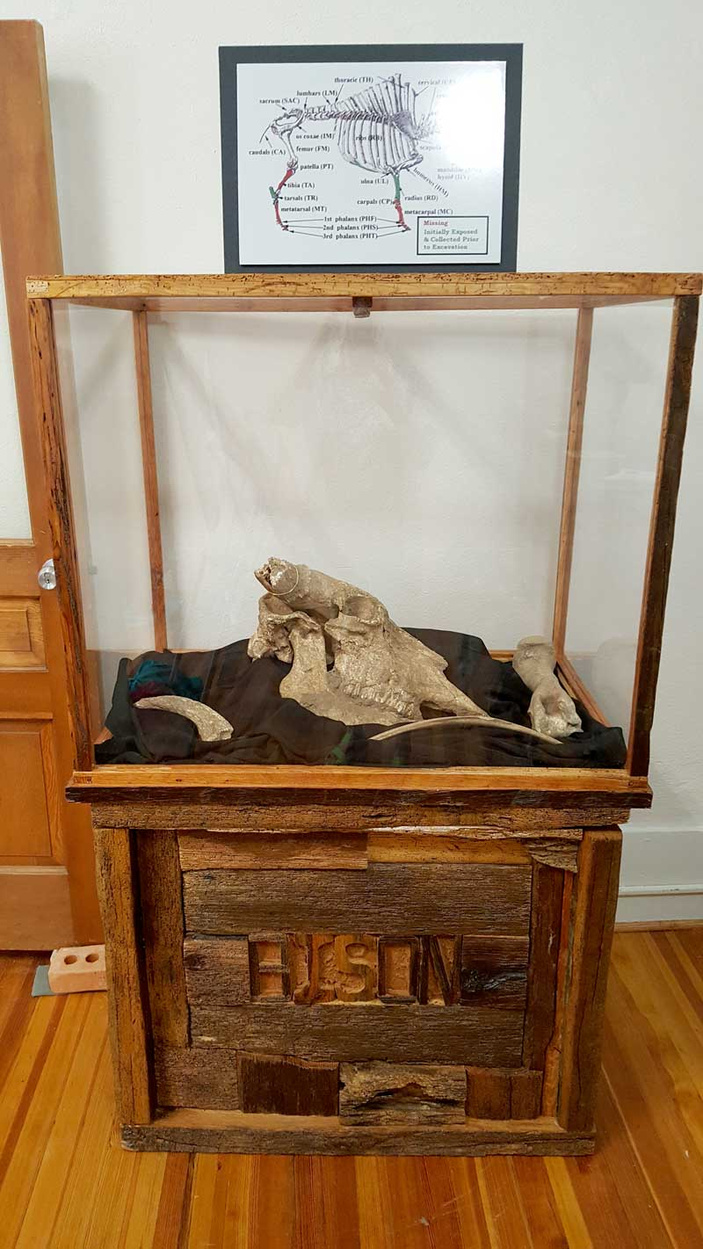 The rare skull of a 700-year-old female bison, nicknamed ‘Rockie,’ found in Rocky Creek in Briggs, is on display at the Falls on the Colorado Museum in Marble Falls and ready for public viewing. Courtesy photo

BRIGGS — After 700 years, most of the that time covered in dirt and mud, “Rockie” is headed to the Falls on the Colorado Museum.

The rare skull of a female bison found in Rocky Creek in Briggs by Ryan Murray will be displayed beginning Saturday, June 17, at the museum, 2001 W. Broadway.

For the past several years, the skull sat in his study.

“It took up a lot of room,” he said. “It’s a great conversation piece.”

In January, he visited the local museum and met Tom Hester, a retired professor of archaeology at the University of Texas. As the two became friends, Murray asked if the museum would be interested in displaying Rockie.

“I think it would be better off to be seen by a lot of people,” Murray said. “It’s better there than sitting in my study. I’ve loaned it to the museum for as long as they want it. I wanted it to be in a place where it would be seen and displayed.”

Museum officials hope the display will prompt visitors to donate money so experts can be employed to reconstruct Rockie to her original size.

In 2013, the Murrays were visiting Ryan’s parents, who own property near Rocky Creek in the Briggs area. The younger Murray was on his way to his favorite fishing hole when he discovered more than bass.

“I happened to see a small bone the size of a cigarette,” he said. “I started digging and realized it was big. As I dug, the more I realized there was more to it.”

With the help of his father and cousin Seth, Murray dug out small bones, which he took to University of Texas at Austin. Experts there told him they were bison bones.

Research indicates that, 700 years ago, a mature female bison, weighing 1,300-1,800 pounds, went down a creek bed in what is now northern Burnet County. The animal either died of natural causes or was bogged down in the mud and perished.

She was part of a bison herd that migrated down a corridor stretching through the Great Plains and into the Edwards Plateau between the years 1308 and 1424.

Eventually, Murray found David Calame, an avocational archeologist, to lead crews in May 2014 to recover the bison. During a two-week dig, the eight workers found a skeleton they said was in very good condition.

Murray returned to the UT campus and contacted E.L. Lundelius, professor emeritus of Geological Studies. Lundelius showed Murray how to preserve the bison's remains, a process that took six months.

“He was very helpful,” Murray said. “They were instrumental in how I preserved the bones. Some of the pieces were starting to fall out.”

As news spread of Rockie’s discovery, archaeologists contacted Murray about getting samples of the bones so they could study them.

The National Bison Association also contacted him about putting Rockie in its national registry. The association advocates for bison producers as well as promotes the benefits of bison meat and educating people about the historic significance of the animal.

“It’s the only prehistoric and dead animal in their registry,” Murray said with a chuckle.

Murray had always been interested in arrowheads and fossils since childhood but never imagined finding Rockie.

“It was a neat and fun experience,” Murray said. “I made some friends from it. It’s given me a newfound appreciation for archaeology. I made friends out of it I wouldn’t have made before.”

Go to cloudhollow.com/prehistoric-bison-excavation for more about Rockie.