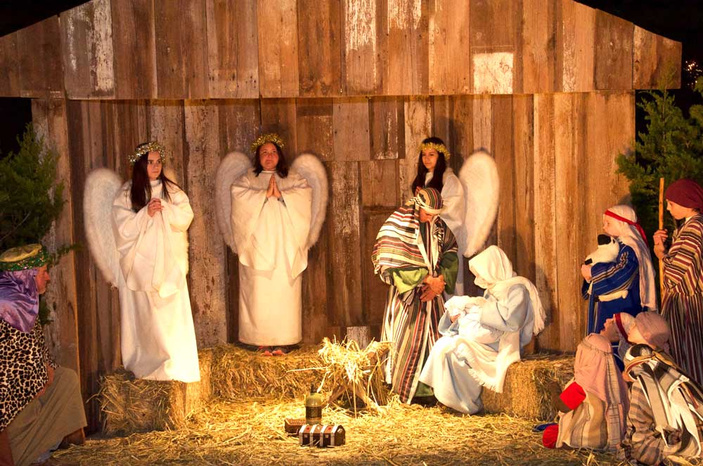 JOHNSON CITY — Half a century ago, First United Methodist Church’s living nativity consisted of a few actors in front of painted scenery and the street as a backdrop. They would scramble to their places when they saw a car coming.

“It has grown over those 50 years to the sound and light pageant it is now,” said George Barnette, missions chairman of First United Methodist Church of Johnson City.

The only thing that hasn’t changed is the living nativity’s purpose: honoring the Savior and strengthening the faith of those who view it as well as those who participate in it.

Those actors are church members, playing the roles of Mary, Joseph, Jesus, the wisemen, shepherds, and other biblical figures.

By moving the event indoors, the crowds have grown, Barnette said.

“It holds their interest this way,” he said. “They’re under cover.”

Hot chocolate, coffee, and cookies will be available. In addition, more than 100 nativity sets from around the globe will be displayed.

Barnette said the sets are collected and brought back by the church members.

It’s common to see at least two, sometimes three, generations of the same family take the stage at the same time.

“We try to get the kids involved early,” Barnette said. “We want newborns to be baby Jesus. As soon as they grow up, they get to be angels and shepherds. Then, they move up to adult roles. There are folks who’ve been in the show all their lives.”

While the people in the show are technically actors, they aren’t memorizing or saying lines; the music is playing, and they are acting out what is being described, Barnette said.

The scenes also include live animals, though which kind varies depending on what livestock is available to be used. It’s not unusual to see a donkey, a lamb, or even a llama.

Thanks to its history and the timeless lesson, people make it a point to drive hundreds of miles to Johnson City to spend 10 minutes at the church.

“It draws people from all over the state and some of the same families who come back every year,” Barnette said. “The nativity is part of their Christmas. It really conveys the story of Christmas, which is not always what you get in the commercial environment.”