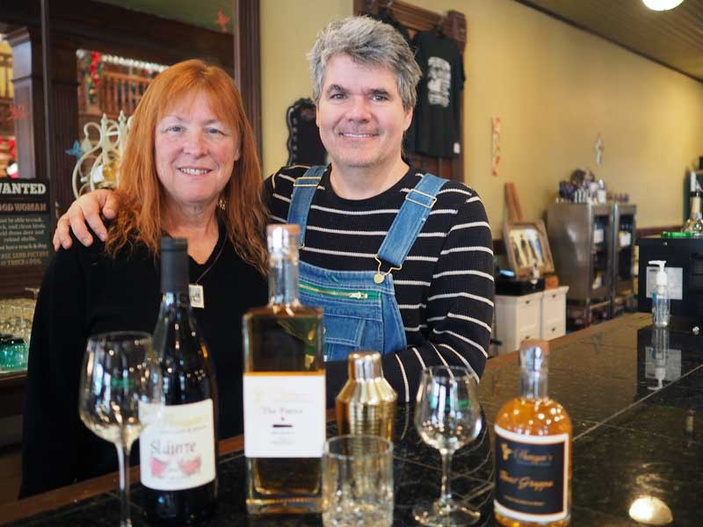 Flanigan’s Distillery and Winery in Bertram is the only such business in the state that makes both wines and spirits. It has a number of wine and spirits, as well as, a regular menu. Patrons can also learn how to judge wine and spirits from owners Dana (left) and Kevin Flanigan and their staff. Staff photo by Daniel Clifton

BERTRAM — When Kevin Flanigan sips his whiskey or enjoys a glass of his wine, he doesn't just take in the flavors and the aroma. He experiences spirits and wine differently than many people.

"When you're drinking a glass of wine or some spirits, you're having a glass of history, man," he said with a big grin across his face.

Kevin and his wife, Dana, own and operate the only winery/distillery in Texas, possibly the United States. You can find them and their products in Bertram, right across the tracks from downtown.

Flanigan's Distillery and Winery opened in August. The couple has not only crafted a line of great products at Flanigan’s but also an experience.

If you know what you want, Kevin, Dana, and the staff are happy to oblige. If you want to learn more about the selection process, they can get you on the right track.

"Remember growing up, and you had those 'Fun Facts' in the comics?” Kevin recalled. "I used to love those. That's one of the first things I'd turn to and just read and learn something interesting, something you don't typically learn."

Kevin brought those "fun facts" to the tasting room at Flanigan's, which is located in a historic building from 1904. He and Dana spent a long time learning about the art and craft of making wines and distilling spirits before opening Flanigan's. This included taking an in-depth sommelier course. Sommelier is a French word basically meaning someone who knows quite a bit about wines.

Yet, that's only part of what the Flanigans bring to the winery and distillery table — rather — bar.

Their careers — he’s a surgeon, and she’s a lawyer — allowed them to travel over the years. During their business trips and vacations, the two sought out wineries and distilleries, adding to their knowledge of the two drinks. They also took away something else: the full venue experience.

First, the visits were purely for enjoyment. Eventually, however, the two began thinking about creating their own wines and spirits — as well as that experience they enjoyed so much.

"We're not just trying to sell them something," Dana said. "We want them to leave more knowledgeable, more empowered, so they can find good wines and spirits wherever they are."

Kevin agreed. Sure, they hope people purchase Flanigan's products — they currently have four wines and four spirits for sale — but it's also about sharing their love and knowledge of the drinks.

Right from the start, Flanigan's isn't a typical winery, and it's also not a typical distillery.

The winery and distillery are separate but housed on the same property. It's, as far as they know, the only such operation in Texas and, possibly, the United States.

The couple doesn't raise their own grapes. Instead, Dana explained, they seek out the best grapes they can find — wherever they may be.

One of the wines still in production is made from grapes from Russian Valley, California. It's a unique and high-quality grape.

When it comes to spirits, the Flanigans again bring a unique twist: They make two of them from potatoes.

Before you think "vodka” or roll your eyes at the strangeness of it, the spirits are worth a stop at the Bertram distillery.

One of those spirits, The Creature, enters the bottle basically right off the still. It's a clear, clean drink with a surprisingly smooth flavor — almost seductive.

The other, The American Gothic, is aged in oak barrels, which gives it a slightly darker color. The flavor is more robust than The Creature, but it’s still very pleasant.

Of course, Flanigan's offers more traditional whiskey, such as The Patriot, billed as a Texas sipping whiskey.

"It's more of what people expect when they think of whiskey," Kevin said about the corn-based drink. "It has more of that kick, but not too much."

Then, there's the Texas Grappa.

Grappa basically comes from what remains after the wine-making process. With the exception of the Greek ouzo, Kevin said creating a great-tasting grappa is tough, but it's something he and Dana wanted to attempt. They began the long process of experimenting, tasting, trying again, and eventually coming up with their own recipe and technique, leading to the Texas Grappa.

Flanigan’s wines are not to be outdone. The winery is currently serving Viaggio, The Bear, Sláinte, and Marmalade, each with a unique taste.

And a tasting is the best way to learn the differences among all of Flanigan’s products.

This is where Kevin's eyes really light up. As much as he enjoys creating wines and spirits, one of his true joys is sharing his knowledge. So when you step into Flanigan's and Kevin leads you to the bar, expect an education.

"When someone comes in here, they may not know anything about tasting and comparing wines, but by the third flight (tasting sample), they look like pros," Kevin said.

A wine tasting starts with a lesson on the bottle itself. There are reasons a wine bottle looks the way it does — neck, shoulders, and punt. Dana pointed out that even the shape of a wine glass serves a purpose.

Then, the wine is poured into a smaller glass for tasting as you are led through a series of steps based on sight, smell, and taste. Kevin explains the reasons why each of those senses is important for truly enjoying a wine but not what you should be seeing, smelling, or tasting.

"When someone tells you this smells like plum or tastes fruity, what does that mean? Really, you may not taste something like that at all," he said. "It's really about what you're smelling and the flavors you’re tasting, not what somebody else is telling you that's there."

"When we were going to tastings, sometimes the sommelier would say, 'There's a hint of this or that.’ Well, really what you taste or smell is based on your memory," she said.

Dana said sommeliers will sometimes use words to describe a particular taste or scent that a person has never experienced. The description then becomes lost on them.

The key, Dana said, is to give the taster the basic knowledge to discover those smells and tastes on their own.

As Kevin leads a person through a tasting, he doesn't just talk about what they're sampling at that moment. He brings in a host of other things related to the wine or spirit.

For instance, he pointed out, that bitter, almost-vinegar taste associated with "old-style" wines is there for a reason. It's only in recent times that Europeans began sitting down to enjoy wines. In the days before traders from Europe, the Middle East, and the Far East opened the spice routes, the food Europeans ate, as Kevin described, were pretty bad.

On top of that, Dana said, some of the food might have been spoiled, especially for commoners.

To counter this, the wine did a couple of things.

"First, it just made it possible they could even eat that food," Kevin said. "Imagine trying to get some of that food down. It was tough. Eating wasn't a pleasurable experience back then. It's something they had to do, not enjoy."

Plus, the acidity of the old-style wine might have helped kill germs and bacteria in food.

As he continued through the tasting, Kevin talked about the major wine-producing countries such as France.

"How do you think those grapes and vineyards got there?” he asked.

Then, he took an entertaining trip through wine history, which began with the Roman army as it moved across Europe.

For spirit tasting, expect a lesson on how drinks such as whiskey, bourbon, and vodka helped craft nations and people.

"Many countries, they relied a lot on their spirits," Dana pointed out.

Whiskey and moonshine even played a role in American history. Did you know Henry Ford, the founder of the Ford automotive juggernaut, laid the groundwork in Detroit and Michigan for what would become the base of Prohibition? Ask Kevin to explain it.

A tasting lasts 20-30 minutes, or longer if the group and Kevin are really on a roll. No two tastings are the same as Kevin, Dana, and the crew add stories.

By the end of it, you’ll walk out with more than just a bottle of wine or spirits.

"We're looking to craft something people will enjoy with our wine and spirits," Dana said. "But we also want people to leave knowing something more about what they like. The thing is, you shouldn't feel like you should like something because somebody says it's this or that. If you don't like something, don't worry, because your palate is different. Drink what you like, what tastes best to you."

"We just want you to find what you like, what you enjoy," he said.

"Here at Flanigan's, we want you to come and have an experience," Dana added. "That's what we're trying to do here."

Flanigan's is located at 330 N. Lampasas St. in Bertram north of the railroad tracks. It's open noon-6 p.m. Wednesdays, Thursdays, and Sundays and noon-7 p.m. Fridays and Saturdays. Flanigan's offers sandwiches and other food as well as serves “Dinner with the Flanigans” from a set menu on Sundays.