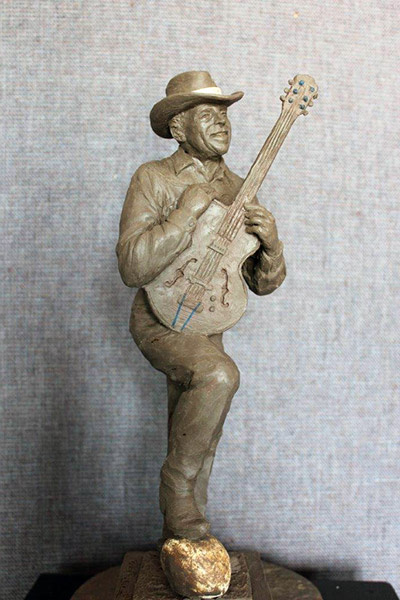 Organizers are hosting an event for the public from 5:30 to 8 p.m. July 13 at Flat Creek Enoteca, 112 U.S. 281 in Marble Falls, to raise money for a proposed sculpture in Marble Falls for Country Music Hall-of-Famer Floyd Tillman. A model of the statue will be on display. Courtesy photo

Born in Oklahoma, he grew up in Post outside of Lubbock.

He not only wrote popular songs in the 1940s such as “I Gotta Have My Baby Back” and “Slipping Around,” he also recorded songs for Gene Autry, Tex Ritter and The Supremes. One of his later albums included duets with Dolly Parton, Merle Haggard and Willie Nelson.

He was inducted into the Country Music Hall of Fame in 1984.

Tillman’s local connection extended to his home in Marble Falls, where he moved in 1985.

Falls on the Colorado Museum historian Billy Becker remembers Tillman having breakfast at the Blue Bonnet Cafe in Marble Falls in the early 1990s.

He said Tillman supported Pickin’ in the Park events in the 1980s and 1990s Johnson Park, which inspired and attracted local artists such as John Arthur Martinez and Debbie Walton as well as budding regional musicians.

“It turned out to be a venue for young musicians to have a place to play,” Becker said. “He helped set up a musical community in Marble Falls.”

As a result of his influences, Martinez and former Houston orchestra conductor Robert Linder, who now lives in the Marble Falls area, launched a fundraiser for a bronze statue to honor Tillman.

In June, the Marble Falls Economic Development Corp. approved $12,000 in matching grant funds as the seed money for the project

“Marble Falls is known for their country music and Texana, singer-songwriter, musicians, guitar and fiddle players in this area,” Linder said. “The Hill Country is a center for all of that. Marble Falls deserves to have something that will bring tourism into the city.

“Also, (we should) honor people who have had influences not just locally but nationally and internationally,” he added. “Floyd Tillman is one of those.”

The project organizers have contracted with Dan Pogue of Pogue Sculpture Gallery and Foundry, 7670 RR 1431 just east of Marble Falls, to create the piece, which is expected to cost about $36,000.

Martinez also approached the Hotel/Motel Tax Committee to request $12,000. Members are awaiting more information on the possible location of the statue, which has yet to be determined.

A model of the sculpture will be on display.

Admission is $25 for wine and hors d'oeuvres with part of the proceeds going to the statue project.