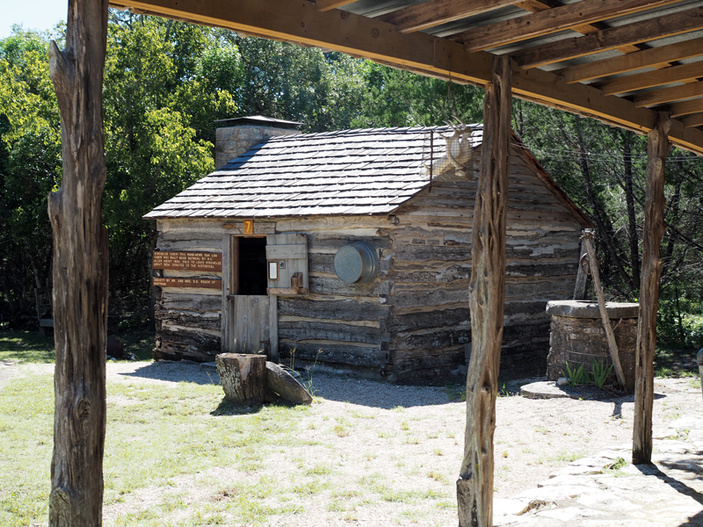 A fish fry from 4:30-7 p.m. Saturday, April 21, at Fort Croghan Museum in Burnet is raising money for repairs to the buildings, many of which are historical. Staff photo by Daniel Clifton

BURNET — On San Jacinto Day, commemorating the day in 1836 when Texas won its independence from Mexico in large part due to the Battle of San Jacinto, the Burnet County Historical Commission and the Burnet County Heritage Society are cooking a meal the early settlers would love while also honoring their legacy.

The commission is hosting a fried catfish fundraiser for the Fort Croghan Museum from 4:30-7 p.m. Saturday, April 21, at the fort, 703 Buchanan Drive. For a $10 donation, you can enjoy fried catfish, french fries, cole slaw, hush puppies, and peach cobbler. The cobbler will be baked by student-chefs in the award-winning Burnet High School culinary arts department, also known as the Iron Dawgs.

Attendees can tour the fort, check out souvenirs such as Fort Croghan tote bags and T-shirts, and look at classic cars. Several gift baskets will be raffled off at 6:45 p.m. Tickets are $1 each or $5 for six.

A Boy Scout troop will present the colors and raise the flag, and Burnet County Judge James Oakley will give the welcome. The Bertram 4-H Club and Burnet High School students will help serve and clean, while Burnet County AgriLife Extension Service is providing ice and volunteers.

The money raised from the fish fry will be used to pay for repairs and maintenance at the fort.

JoAnn Myers, chairwoman of the Burnet County Historical Commission, noted the expenses for the fort, which include maintenance, insurance, and termite control, far exceed the donations.

Many of the cabins that are on site were donated by members of the founding families and are very old. While the roofs have been repaired on most, termites have taken to the floors, Myers said. Repairs to the cabin will be piecemealed, she added.

Because the cabins are historical, members want to repair them with the original type of materials or authentic-looking materials, which are expensive, Myers said.

The Vandeveer Cabin, which is recorded as a Texas landmark, is now located on the grounds.

“But all of that costs money,” Myers said.

The fort was established in 1849 by the U.S. government to protect the early settlers from Indian raids.

It was almost destroyed for commercial development in the 1960s, but a group of volunteers saved it by hosting bake sales and garage sales and soliciting donations from family members, businesses, and friends.

That group of volunteers became the Burnet County Heritage Society, which is charged with maintaining the fort, and it restored the grounds and created the museum that exists today.

The society has never charged admission to the fort and doesn’t want to start now. That’s why fundraisers such as this fish fry are crucial, Myers said.

The commission has purchased enough fish to feed 500 people, and the group can’t store any of it, she said, so they want to serve it all.