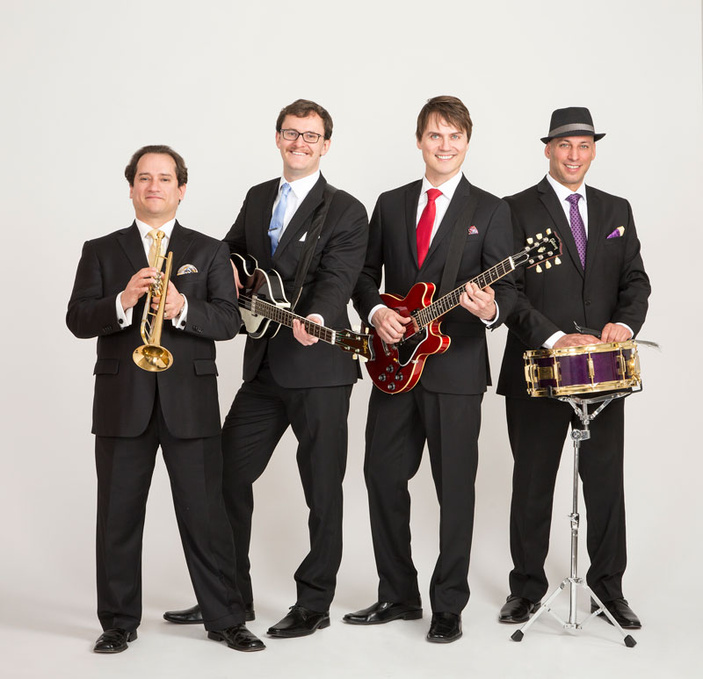 The Four Freshmen, who include Curtis Calderon (left), Tommy Boynton, Stein Malvey, and Bob Ferreira, will perform at 4:30 p.m. Sunday, November 10, at St. Paul the Apostle Catholic Church, 201 Dalton Circle in Horseshoe Bay. The concert is hosted by Horseshoe Bay Cultural Enrichment. Tickets are $35 each and can be bought at hsbenrichment.org. The concert was originally scheduled as a two-day event November 2 and 3 at a smaller venue. Tickets previously purchased for those days will be honored at the November 10 performance. Courtesy photo

When The Four Freshmen sing, audiences travel back in time to first loves, first dances, and first romances.

“These songs will bring back a flood of memories,” said Bob Ferreira, who sings bass and plays drums for the quartet. “I see it, it’s not lost on me. It’s a truly unique thing. It brings back sentimental memories.”

Tickets are $35 each and may be purchased at hsbenrichment.org. Wine will be served. The concert was originally scheduled as a two-day event November 2 and 3 at a smaller venue. Tickets previously purchased for those days will be honored at the November 10 performance, according to the Horseshoe Bay Cultural Enrichment website.

Launched in 1948, The Four Freshman mastered jazz harmony in a way that drew in their audiences. The unique sound still resonates with crowds more than a half-century later, Ferreira said.

“It is a sound that deserves to be heard,” he continued. “It is a legacy. It inspires so many. It changed the face of music like the Beach Boys. A lot of those groups were influenced (by this sound).”

Ferreira refers to himself as “the senior Freshmen” because of his 27 years with the quartet, though he does not hold the record for longevity. That distinction goes to founding member Bob Flanagan, who was with the group for more than 44 years.

More than 20 different members have been part of the quartet the past several decades. The current group includes Ferreira, Stein Malvey, who joined in 2013 and sings second part and plays guitar; Tommy Boynton, who joined in 2015 and sings lead vocals and plays bass; and Curtis Calderon, who plays trumpet and sings the third part.

Even as members change, the songs remain the same, including hits such as “Graduation Day,” “It’s a Blue World,” “Day by Day,” “When My Sugar Walks Down the Street,” “Stardust,” and “The Girl from Ipanema.”

“It’s so great to hear those stories,” Ferreira said. “They’re all songs that are very familiar. People will relate to all that. There’s so many tunes. A good song is a good song.”

According to Ferreira, this is the first time The Four Freshmen have performed in Horseshoe Bay, and they look forward to the experience.

“When we get a chance to share what we do, we jump at it,” Ferreira continued. “We don’t get to play Texas all that often. I love the group. It’s a passion. I love traveling, I love the music.”