Writing Is on the Wall for Red Top, But That’s a Good Thing for Old Llano Jail 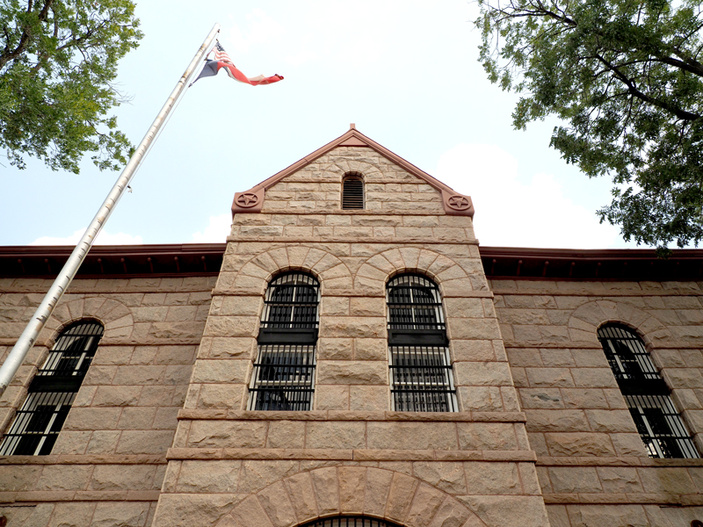 The 1895-built Llano Red Top Jail served as the Llano County lockup for decades before officials built a new one. Llano residents and history enthusiasts have been working toward renovating the structure for years. The Friends of the Red Top Jail are holding their annual meeting at 5:30 p.m. Friday, Aug. 10, at the Llano County Library, 102 E. Haynie in Llano. The meeting is open to the public, and a tour of the nearby jail will follow. Staff photo by Daniel Clifton

Writing Is on the Wall for Red Top, But That’s a Good Thing for Old Llano Jail

After the meeting, folks can tour the historic structure.

The meeting is open to those interested in the renovations. It is 5:30 p.m. Friday, Aug. 10, at the Llano County Library, 102 E. Haynie. The jail is located within walking distance from the library.

“Things are progressing at the Red Top Jail,” said Kim Webb, a member of the Friends group. “We got the electricity on. We’ve patched the ceiling in the gallows.”

Officials need to make repairs to the lower parts of the roof, which weren’t done in previous renovations. During the upkeep and renovation process, they noticed bullet holes in the roof and upper part of the building.

It turns out, Webb said, that, many years ago, people would sit in the Llano County Courthouse and shoot birds off the jail’s roof. Not everyone was a good shot, hence the holes.

There is still other work to be done on the old jail, but some things will remain the same.

Webb gives occasional tours, pointing out the history of the jail as well as that of its prisoners. The history, one could say, is written on the walls.

“I tell everybody when we’re going up the stairs to the gallows to look at the walls because, you know, think about jailers trying to get someone into the jail cell who doesn’t want to be there, and they struggle,” she said. “Those struggles left marks on the walls. Then, there’s the graffiti on the walls.”

Over the years, inmates wrote or scratched their names into the walls, sometimes adding where they were from and how long they had been locked up.

“We’re not going to do anything with the graffiti,” Webb added. “The walls — the walls tell a story.”

After the Friends meeting, which will include light refreshments, everyone will walk to the jail for a tour.

“I guess when people ask me why I do this,” Webb said about her involvement in the project, “it’s because the jail is such an interesting and historic building. It’s full of all these stories, and I think that’s worth preserving.”